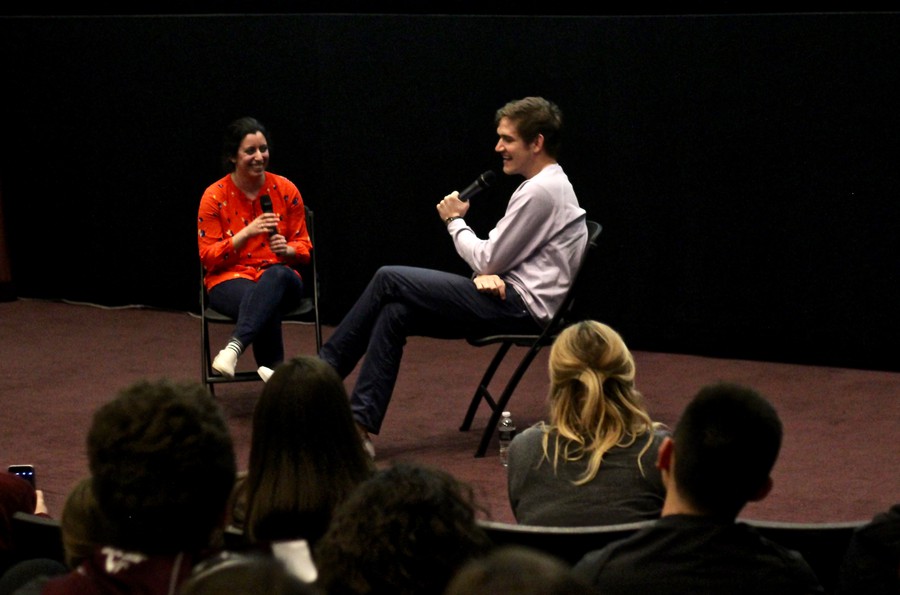 Bo Burnham is more famous than he thinks he is. That is to say, a lot of people—University students and community members alike—packed into the Max Palevsky Cinema last Friday to see the comedian, musician, and writer describe himself as an “E-list celebrity.” Burnham’s way with words has landed him roles in Parks and Recreation and Zach Stone Is Gonna Be Famous, a poetry book deal, and three stand-up specials (most recently Make Happy, released exclusively on Netflix). All these projects have in turn served to bring Burnham out of the early-YouTube-to-NYU niche his early career occupied and into a truer collective consciousness. Eighth Grade, which Burnham wrote and directed, is his first feature film.

The movie follows 13-year-old Kayla (Elsie Fisher) through the last few weeks of her eighth-grade year. The film’s overall feel, its cinematography and content, is noticeably Burnham. Synthetic music (Burnham’s stand-up staple, guided by the classical training of Anna Meredith, the movie’s composer) fills the negative space of Kayla’s life while close, grainy zooms convey the caged, low production value of an eighth-grade vlog. Dense and tight camera work capture her scrolling down Instagram, searching for videos on YouTube, and playing with Snapchat filters. It is rare to see such a naturalistic depiction of social media; Burnham’s directorial clarity is used not to condescend, but merely to present. As Kayla’s inner life and the one she aspires toward, the Internet becomes the movie’s lifeblood.

The Internet has been the lifeblood of Burnham’s career, too. He is one of the early-2000s YouTubers, of the same generation as Justin Bieber, the ones who skipped the stairway to fame and launched into sought-after careers because of videos made in their teens. Now 27, Burnham has some distance from those roots.

“GEICO commercials feel like the Simpsons,” he said in the Q&A that followed the screening. Art, by extension, seems condensed in time and space, rendering the “usual comedic tools of irony and cynicism…toothless.”

Eighth Grade, accordingly, finds its teeth in what might crudely be called authenticity. Burnham said in the Q&A that he aimed to create a “small, human, naturalistic” movie, and a set where the actors (mostly children) could feel comfortable being themselves.

“I wanted them to be comfortable on set. If you’re weird, be weird; if you’re bored, be bored, you know. And kids are so naturally and unselfconsciously funny—I asked all the kids to tell me a special talent they had if they wanted to and one came up and I was like ‘What’s your special talent?’ and she shrugged and went ‘I have eczema.’”

Burnham’s attention to the younger members of his cast is necessary in a film like this, and it pays off. In the Q&A, Burnham noted his own distance from the contemporary suburban adolescence depicted, and also the gendered nature of the experience: “I was doing research for this movie…[by] watching eighth graders’ homemade YouTube videos for hours.… The guys would talk about video games and the girls would talk about their souls. We figured souls would make a more interesting movie than, like, 10 hours of Minecraft, so, Kayla.” Hence the need for listening: Kayla’s vlog sign-off (a tragicomic “Gucci!” manipulated with directorial finesse to incur a different audience reaction every time) is apparently an actor original. The movie tries to be the antithesis of the IV-drip of entertainment, as Burnham has called it before. It is unprocessed, tense and uncomfortable—what millennials need, not necessarily want. No one will be ripping this movie into a GEICO ad.

Burnham’s cleverness, anxiety, disassociation, and, to some extent, his self-deprecation all make him poised to be successful at UChicago. But some moments are not funny, even if the film wants them to be: For example, when an older boy forces Kayla to play “Truth or Dare” with him in the backseat of a car, the scene glorifies for too long a terrible power dynamic, a nearly-but-not-quite depiction of sexual violence. Burnham seemed aware of the scene’s controversial nature, assuring the audience of the steps taken to make sure Fisher felt comfortable while filming. But on the big screen, the scene remains ambiguous; there are some aspects about female sexuality that Burnham, maybe in his anxiety or simply in his maleness, seems unable to nail. Even the awkward boy Kayla meets at the end throws up red flags that are all-too-familiar to anyone who’s tried to date a man at UChicago.

In summary, Eighth Grade is good, but it is not a comedy. Rather, it is an exercise in what Joan Didion might call “making peace with your past selves.” “Comedy,” as Burnham himself once said, “dies when it gets into bed with celebrity.”