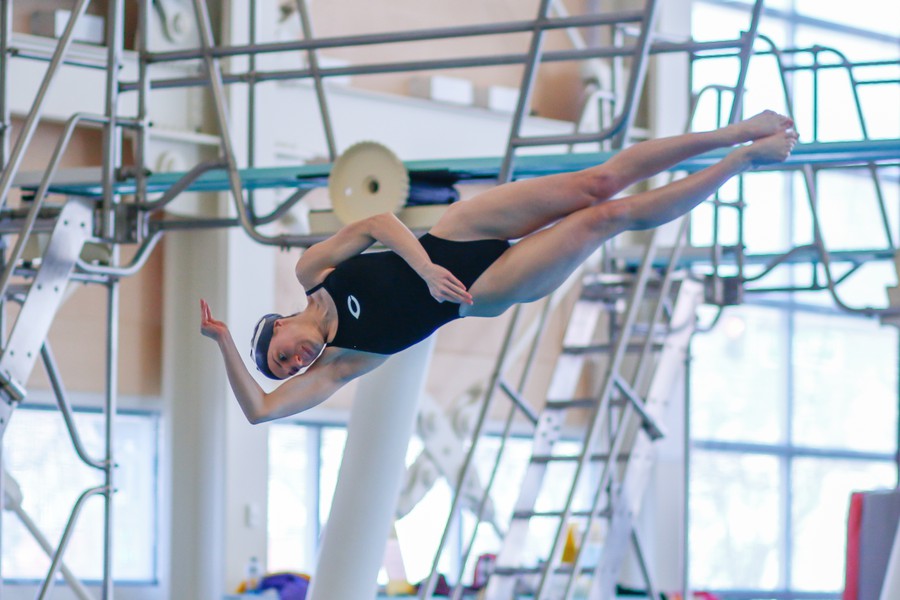 DeMuro competing at the diving regionals this past March.

Natalie DeMuro has been an integral part of the University of Chicago swim and dive team for the past four years, qualifying for the NCAA Diving Regional every year and receiving numerous awards. This year, she led the women’s team as co-captain, along with fourth year Florina Yang, and served as a role model whom all the women on the team looked up to. She has been a UAA All-Academic Scholar, CSCAA Honorable Mention Scholar, and UAA Athlete of the Week multiple times, but aside from her numerous awards, her dedication and motivation shined through. DeMuro was part of a summer swim team when she was younger, but always watched the divers on the team, and decided to try it one summer. This began a long career of diving that would create lasting memories and friendships.

When asked what makes DeMuro not only an excellent diver but also a great captain, third-year diver Anna Girlich said, “Natalie has not only been the greatest teammate the past three years, but also the greatest friend. She always led by example, and knew exactly what to say or do for any problem that came up on the team. She was always so hardworking and determined, but also so supportive of her teammates, and I don’t know what I am going to do without her next year.”

At this year’s UAA Championships, DeMuro scored the most points of any swimmer or diver on the UChicago women’s team, helping the team earn fourth place at the conference championships. She placed third in the one-meter dive with a total of 439.45 points, and second in three-meter dive with a total of 483.45 points. DeMuro fittingly had the chance to conclude her diving career at UChicago’s home pool, when the team hosted the diving NCAA Regionals. DeMuro led the UChicago contingent with a seventh-place finish in the one-meter dive and was named an NCAA Championship alternate to finish her career.

Every athlete faces challenges daily, and DeMuro was no exception throughout her time at UChicago. She struggled with multiple injuries throughout her career, including problems with her hips that did not allow her to practice all of her dives throughout the year. When asked if one particular obstacle stood out to her, DeMuro mentioned a meet during her first year when she hit the diving board. She emerged from the pool with cuts and bruises all over her arms, hands, and wrists, but was only halfway through her dives for the meet. For a total of 11 dives that meet, two were reverses, and she hit the board on the first reverse. With one more reverse ahead of her, DeMuro never considered giving up. Although her team and coach told her to take the rest of the meet off, DeMuro decided to keep diving. “I had to contribute otherwise I knew I would never want to do the dive again.” Her team cheered her on as she overcame her fear and successfully completed the rest of her dives.

Looking back at her time spent diving with UChicago, DeMuro was proud of not only her accomplishments in the pool but also of the memories she made and the people she met. “The team is my family and I will forever be grateful for my days in the pool. My teammates have been the most encouraging and fun-loving people, always cheering me on whether I’m nailing dives or falling flat on my face,” she added. “I will miss seeing my teammates every day, but I know the future is bright and I can’t wait to see what each one of them accomplishes.”

The swimming and diving team will miss DeMuro’s excitement and energy at every meet next year. First-year swimmer Hadley Ackerman said, “As a captain, Natalie perfectly balanced being a caring friend and an example to the rest of the team. I could always count on her smiling face in the locker room and it definitely will not be the same without her next year.”

At the end of her 10-year diving career, DeMuro reflected on her time at UChicago. “My time as a student-athlete at UChicago has and always will be the most valuable and worthwhile experience, and I’m convinced there is no better place to study and compete,” she said. “I am endlessly thankful to my family at home and at the pool for their unwavering support along the way.”