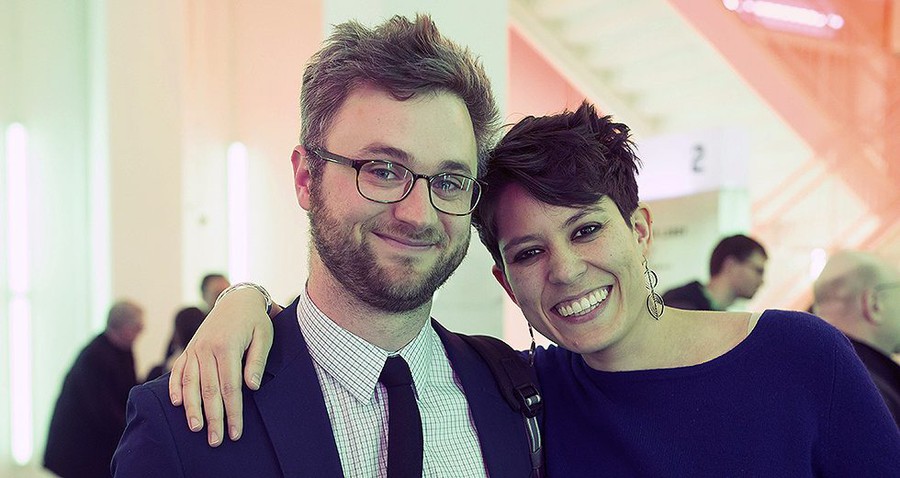 Elizabeth Ogonek is still pinching herself that it happened.

In spring 2014, while studying in the United Kingdom and celebrating a recent appointment to the faculty of Oberlin Conservatory, Ogonek received a message from representatives of the Chicago Symphony Orchestra (CSO)—one of the most storied orchestras in the world.

“I got an email out of absolutely nowhere saying, ‘Hi, we’re searching for the next Mead Composer-in-Residence. Your name has come up. Can you please send scores?’” she recalled in a phone interview.

Not yet 25, Ogonek had been tapped as a candidate for a dream position. Unbeknown to her, Samuel Adams, a San Francisco Bay Area–based composer (and son of composer John Adams), was also in the running. Both Adams and Ogonek were ultimately selected by Zell Music Director Riccardo Muti and other CSO administrators in January 2015 as the next Mead Composers-in-Residence, giving them an opportunity to write music for the CSO as well as curate its contemporary music series, MusicNOW.

Currently celebrating its 20th season, the MusicNOW series creates a space for living composers in addition to the contemporary programming included as part of its other subscription series. Staging concerts at the sleek Harris Theater instead of stately Orchestra Hall, MusicNOW’s digs also embody the era it hopes to represent.

For their final season as composers-in-residence, however, Ogonek and Adams wanted to use MusicNOW to toy with aesthetic expectations. While previous MusicNOW concerts have been formatted as thematic potpourris—in which works by multiple composers are connected by a conceptual through-line—Adams and Ogonek emphasized more focused programs in MusicNOW’s 20th season. The first concert featured works by previous CSO composers-in-residence; the second was a portrait of pianist and composer Vijay Iyer; and the third saw a semi-staged performance piece by composer Amy Beth Kirsten. As a brand-new venture earlier this month, MusicNOW even partnered with the Art Institute of Chicago to create installations of live music throughout the museum, with patrons moving freely throughout the space.

“We had three micro-events in three different gallery spaces at the Institute, with audiences sort of peripatetically engaging with the music…. It was a really different experience,” Adams said in a phone interview.

The setting will come to the fore again with the MusicNOW season closer this Monday: For one night only, MusicNOW is taking over Orchestra Hall in a program led by conductor-composer and new music doyen Esa-Pekka Salonen. The concert will feature brand-new works by both Adams and Ogonek, capping their three-year residency.

Adams composed his second violin concerto for the occasion, to be performed by soloist Karen Gomyo and chamber orchestra and loosely inspired by the conceits of pre–Romantic era violin concerti.

“I think it might be very misguiding to the listener to say that this piece is a contemporary take on Baroque music,” Adams said. “I suppose my desire to engage with these formal conceits is rooted in my interest in framing them as psychological mechanisms, rather than just formal mechanisms. I have a kind of 21st century take on a fugue in the first movement, and the third movement is kind of loosely based on the ritornello form [in which orchestra and soloist alternate episodes].”

Meanwhile, Ogonek is offering up The Water Cantos [notes from quiet places], a work for an unconventional ensemble: one flute, two clarinets, three percussionists, piano, four cellos, and double bass. The piece is programmatically inspired by trails and vistas in the western U.S. but aesthetically inspired by the affinities and strengths of specific CSO players, which she experienced firsthand while on tour with the orchestra in the fall.

“The idea for it came from hearing the very beginning of Rossini [the Overture to William Tell, part of the CSO’s tour program], and I just thought that the cello section sounded so beautiful, rich, and warm. You could almost hear a pin drop in the center of their sound…. I also very much had Cynthia Yeh in mind as the principal percussionist. She loves playing mallets, so there’s tons of mallets in this piece.” 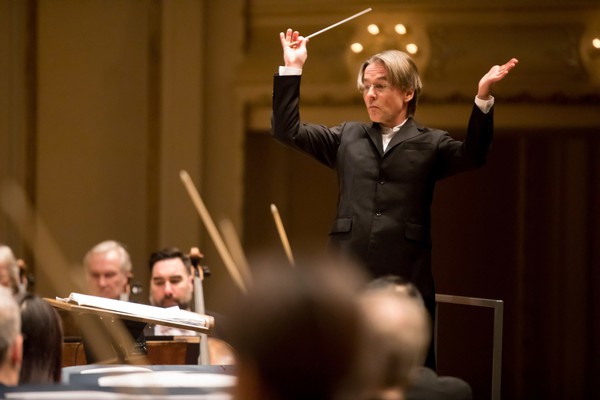 Though their pieces are incredibly different from one another, both composers can hardly imagine a better send-off than the opportunity to have their pieces workshopped and rehearsed by Salonen in the CSO’s flagship hall.

“We had a first rehearsal yesterday, and it was just so great, on so many different levels. [Salonen’s] questions and comments were informed by his experience as both a conductor and composer. It’s really wonderful to have that kind of sympathetic ear during the process of creating a new piece,” Adams said.

“It’s so fascinating to see him in his new music element…. As a composer, he understands the sorts of insecurities a composer faces and the challenges of hearing a piece for the first time in a rehearsal.”

With the end of Adams’s and Ogonek’s tenures just around the corner, the CSO has yet to announce the next Mead Composers-in-Residence. (Adams and Ogonek have not heard anything about their hypothetical successors.) When asked for comment, the CSO did not comment on the fate of the Mead residency proper but did say that artistic leadership for MusicNOW would be announced “at a later date.”

Regardless of future directions of MusicNOW, one thing is certain: This past season demonstrated what the series can look like at its best, in terms of breadth, depth, and imagination. Both Adams and Ogonek reflect positively on the ways in which their tenure extended MusicNOW’s creativity beyond programming—or, in Adams’s words, reframed it as less a concert series than an “ideology.”

“I hope that experimentation with format is something that remains as part of the series…. Composers and performers need to exist in a variety of spaces and contexts. I think it’s amazing to be more expressive and flexible in how those things are presented,” Ogonek said.