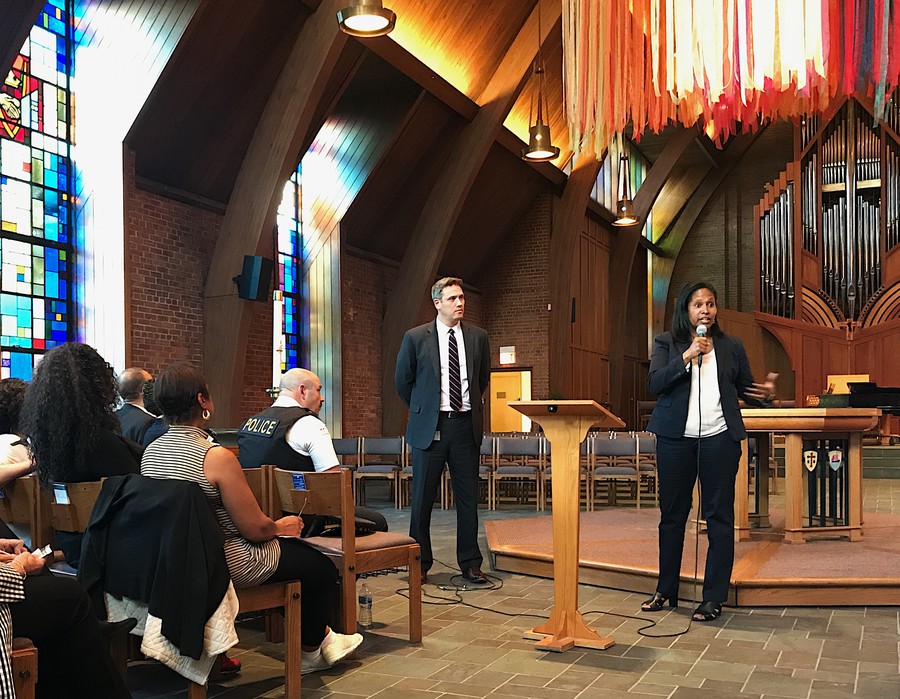 CPD made the announcement at a community meeting hosted by 4th Ward alderman Sophia King last Wednesday at St. Paul & the Redeemer Church.

Representatives from the University of Chicago Police Department (UCPD) and Eric Heath, Associate Vice President of Safety & Security at the University, were also in attendance to discuss how UCPD functions in collaboration with CPD. Heath briefly mentioned that the University is updating its security alert system to be “opt-in,” after receiving varied feedback on the type and amount of alerts that the University currently sends out.

King said that she convened the meeting to inform residents about new CPD technology and patrolling in response to recent shootings in Kenwood, and in anticipation that crime will increase during the summer.

The meeting is the fourth in a series of security meetings that King is hosting throughout her ward. She confirmed that it is unrelated to the recent shooting of UChicago student Charles Thomas by a UCPD officer.

During the meeting, 2nd District commander Crystal King-Smith announced that ShotSpotter gunshot sensors and SDSCs are now up and running in the 2nd District.

According to King-Smith, when a shot is fired, ShotSpotter sensors triangulate the shot and immediately send phone notifications to CPD officers. CPD captain Marc Moore told The Maroon that on the first day the sensors were installed in the 2nd District, they detected a shot on 57th Street and State Street, and CPD officers arrived on the scene before receiving a call about the shot.

Information from ShotSpotter sensors are also sent to SDSCs, which were developed by the Crime Lab of the University’s Urban Labs. SDSCs are police station rooms that contain large TV screens that display surveillance footage and crime maps.

Last fall, CPD announced that the new technology would expand to the 2nd District and five other police districts by mid-2018. According to the Sun-Times, after the 7th and 11th Districts—two of the most violent districts in the city—implemented the technology, murder and nonfatal shooting rates dropped by double digits.

However, community groups have also voiced critiques about the legality and ethics of the technology, South Side Weekly reported.

The American Civil Liberties Union has raised concerns that ShotSpotter sensors can potentially threaten individuals’ Fourth Amendment rights, citing incidents in other cities in which gunshot sensors have picked up conversations that were later used in court cases. At the meeting, King-Smith stressed that the ShotSpotter sensors will pick up only gunshot sounds and not any other sounds or voices.

UCPD chief Kenton Rainey said that UCPD will be able to access all information from the 2nd District’s ShotSpotter sensors and SDSCs.

“There is no separation between what CPD is doing and what UCPD is doing,” Rainey said.

Kevin Ryan, Area Central Deputy Chief, also announced that CPD will increase the frequency of bike patrol in the 2nd District in the summer. Rainey confirmed that the increased bike patrol will also run through UCPD jurisdiction.

At the end of the meeting, one resident expressed concerns that UChicago’s security alerts are not comprehensive enough.

Heath responded that he has also received feedback that there are too many alerts, and his department is in the process of updating the security alert system into an “opt-in” system in which people choose how many and what type of alerts to receive. He said the goal is to introduce the new alert system by this summer.

Throughout the meeting, King repeatedly emphasized her goal of achieving good community policing.