"The Originalist": A Novel Twist on Scalia at the Court 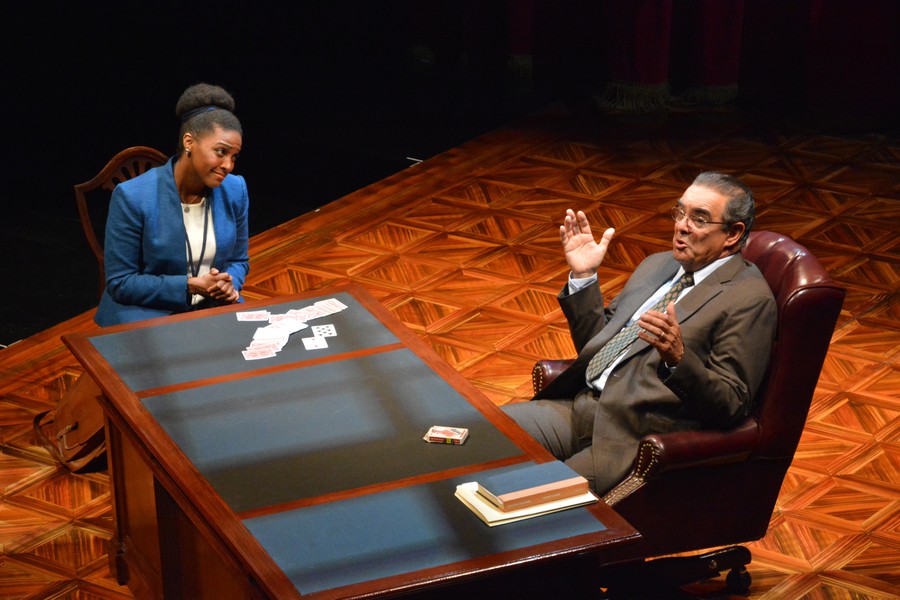 The Constitution of the United States…its only keepers, the people. – George Washington

These are the words written on the front of the pocket-sized Constitutions handed out to playgoers as they take their seats at the Court Theatre. Patrons are immediately encouraged to consider the role of Supreme Court justices as protectors of the Constitution and, by extension, of American democracy as they watch The Originalist by John Strand. Nobody took this responsibility more seriously than Antonin Scalia, the intellectual father of originalism, who was either despised or loved by all for his judiciary-altering interpretive methodology and distinct conservative tilt.

Once the audience settles into their seats, “Libiamo, ne’ lieti calici” from Verdi’s opera, La Traviata, begins playing, and Edward Gero, portraying Justice Scalia, emerges from behind the curtain, pantomiming a composer to the amusement of the audience. One feels the intimacy of Court Theatre as he addresses the audience directly, pretending to be a guest speaker addressing an audience of aspiring law students. It is here that we meet Scalia’s foil, Cat (Jade Wheeler), a young, Black, lesbian Harvard Law School graduate, who describes herself as a “flaming liberal." Despite their obvious external differences, it is the intellectual and experiential similarities between Cat and Scalia that ultimately convey the message of the play.

The majority of the show is composed of philosophy-driven conversational sparring between Scalia and Cat. Scalia’s decision to hire Cat as his clerk encapsulates the overarching message of the play to embrace debate and respect the opinion of others. At the start of the clerkship, Cat emphatically states that her politics will not be influenced by Scalia and is reluctant to try to understand the reasoning behind opinions that differ from her own. As her time in the justice’s chambers goes on, she begins to see that Scalia (at least as written by Strand), is actually open-minded, and that his personal beliefs often differ from the conclusions that one might draw from his dissents. His decisions are consistently driven by a commitment to limit the so-called legislative power of the court (i.e. not condemning affirmative action, but at the same time not seeing it as a constitutional right). By the end of the play, Cat disassociates from her personal beliefs and drafts Scalia’s opinion on United States v. Windsor, which demands that she write from a perspective that upholds the Defense of Marriage Act, allowing states to refuse to recognize same-sex marriages.

Gero’s portrayal of Scalia is impeccable. He captures the late justice’s penchant for showmanship, his sharp sense of humor, pugilistic stubbornness, and general mannerisms. Strand does a lot to humanize Scalia throughout the play, attempting to complicate the negative view of his character that a liberal audience would generally hold. He portrays Scalia as a charming, opera-loving political idealist whom audiences can’t help but love. He emphasizes how Scalia attempted to separate his politics from his personal life by writing about his friendship and respect for Ruth Bader Ginsburg. He concedes that Scalia was a man with prejudices and could not always keep them out of his politics; he says that Scalia could never have a gay son because it would be his son. In the play’s program, Gero writes, “I’m used to playing characters that audiences love to hate, but [until now] I’ve never played one that audiences hate to love.”

The Originalist featured excellent acting, well-placed operatic musical scores, and at its core, an important warning against demonizing those with whom you disagree. At times, Scalia’s character could seem a bit romanticized. It’s important to remember that this play is fictional and the real Scalia would likely never have formed this type of mentor relationship with a Black gay woman. Perhaps Strand’s most impressive feat was to write a play about a polarizing political figure without sending a partisan political message or catering to a leftist or rightist mindset.

I entered the Court Theatre much like Cat entered her clerkship: ready to view Scalia as the villain of the play because of his political views. However, I left with a better understanding of his reasoning, making it harder to dislike him. Even though the real Scalia was different from Strand’s Scalia, and even though Scalia didn’t always keep his politics out of his decisions as he claimed to have done, Strand’s message of open-mindedness and respectful discourse still shines through, and makes The Originalist a worthwhile watch for anyone willing to challenge their own, seemingly unbendable, political stance.