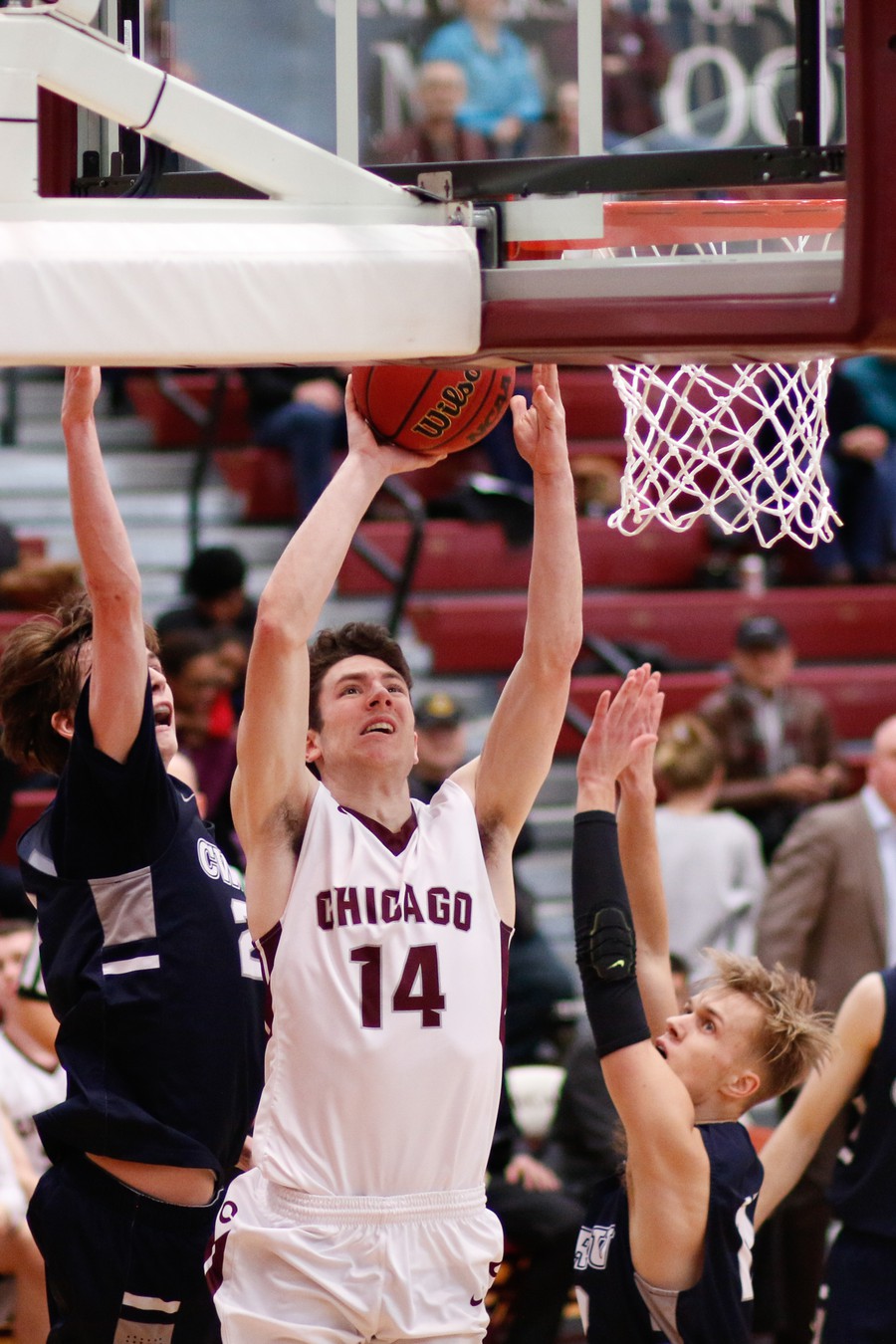 Fenlon going up with the ball against Case Western.

Jake Fenlon will leave Hyde Park as one of the best shooters ever to suit up for the Maroons. Fenlon arrived at the University of Chicago four years ago after turning down other programs, including his hometown squad and conference rival, the University of Rochester. Fenlon beamed about how grateful he was to be afforded the opportunity to attend the University of Chicago, saying, “I want to thank coach [Mike] McGrath and coach [Jason] Petti for believing in me and constantly pushing me to be my best both on and off of the court.”

Off the court, Fenlon embodies the mindset of the student-athlete. Fenlon has made the Dean’s List and All-UAA Academic team multiple times in addition to being a Dougan Scholar. Fenlon’s precise nature on the court carries over to his fastidious nature in the classroom. Friend and fellow fourth-year Ryan Shearmire commented on Fenlon’s attention to detail, saying, “Everything that he does is exact. From the way he comes off of screens to his [Math] 196 homework, everything must be perfect.”

Aside from taking advantage of the resources available at UChicago, Fenlon praised the teammates that he had along his journey. “From the day that I arrived, everyone was so welcoming and made the basketball team my family. I could not thank them enough. I will miss being with the guys on a daily basis. I hope that we have laid the foundation for something special to happen in the future.”

Fenlon took a step back to thank all of his loved ones who have sacrificed so much to help him accomplish his goals. Fenlon noted, “Sometimes I find myself taking all of the blessings that I have had for granted, but I quickly try to remind myself on a daily basis of how lucky I am. My parents sacrificed so much over the past 22 years and have given me their unflinching support along the way. I just hope that I made them proud to be their son.” Fenlon also extended his gratitude to his teammates for continuing to urge him to shoot.

Fenlon leaves Ratner as the best three-point shooter in the history of the program. After setting the school record for made three-pointers in a season as a third-year, he broke his own record this past season as a fourth-year. He also holds the career record for three-pointers with 254 makes on 653 attempts. Going into the final half of the season, the Maroons’ backs were against the wall, but Fenlon and his fellow fourth-year captain, Collin Barthel, put the team on their feet. Fenlon saved his best for last. The sharpshooter drilled six three-pointers en route to a career high of 31 points and an upset of No. 2 Wash U in the season finale. Fenlon reflected on his final game by saying, “That was special…. I couldn’t have dreamed up a more perfect scenario to finish my college career than by upsetting our rivals in Wash U.”

Jake Fenlon leaves the Maroons with some big shoes to fill next year, both on and off the court. Third-year backcourt partner Noah Karras offered some concluding thoughts on Fenlon’s career and legacy, saying, “Jake is a once-in-a-lifetime talent and someone that I can truly count as one of my best friends at UChicago. On the court, he could drill a three from anywhere, but off of the court he was a goofy guy who also killed it in the classroom. We’re going to miss Jake and everything that he did for the program.” Next year, Jake Fenlon will be working as an investment banking analyst for Credit Suisse in New York City.