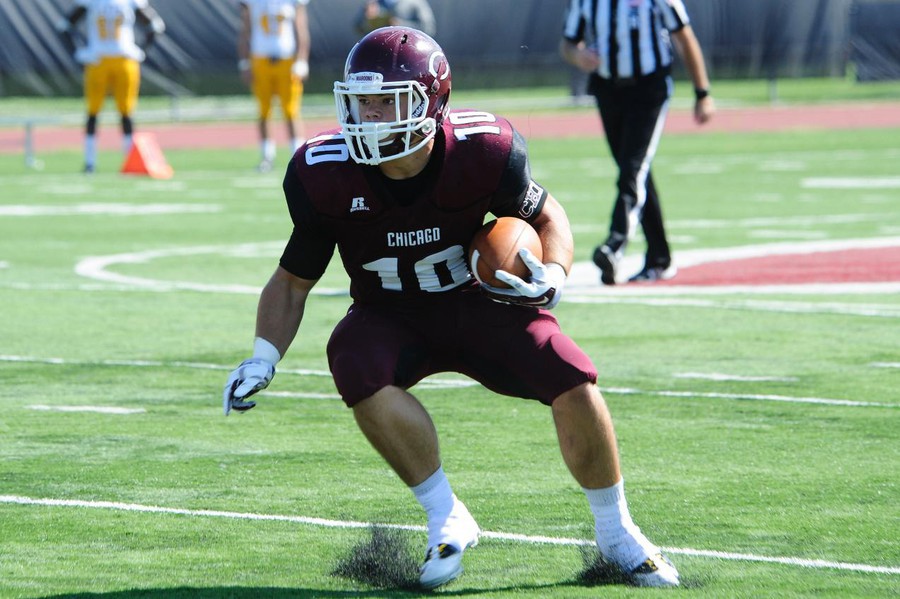 Fourth-year Chandler Carroll grips the ball as he skirts around his opponents.

Fourth-year Chandler Carroll is the Maroon Male Athlete of the Year after having one of the most impressive seasons in the school’s storied football history, rushing for 1,249 yards and 16 touchdowns on 258 attempts, while adding another 251 yards and two touchdowns on 28 receptions. The two-time captain set four school career records this year: total touchdowns (46), rushing touchdowns (37), points scored (276), and rushing attempts (136), and three more season records: total touchdowns (18), rushing touchdowns (16), and points scored (108). This is an addition to the school record for most rushing yards in a game (311) he set back in 2015.

An incredible athlete and an even better person, Carroll has already collected numerous accolades this season such as First Team All-MWC, First Team CoSIDA Academic All-American, CoSIDA Academic All-District, UAA All-Academic Team, NFF Hampshire Honor Society, and was twice named both UAA Athlete of the Week and MWC Player of the Week. As a running back, he was the motor of the Maroon offense and was subject to constant hits that would have worn down a lesser athlete.

This makes the third year in a row a football player has won this award, as Carroll follows in the footsteps of former standout teammates Burke Moser and Vincent Beltrano.