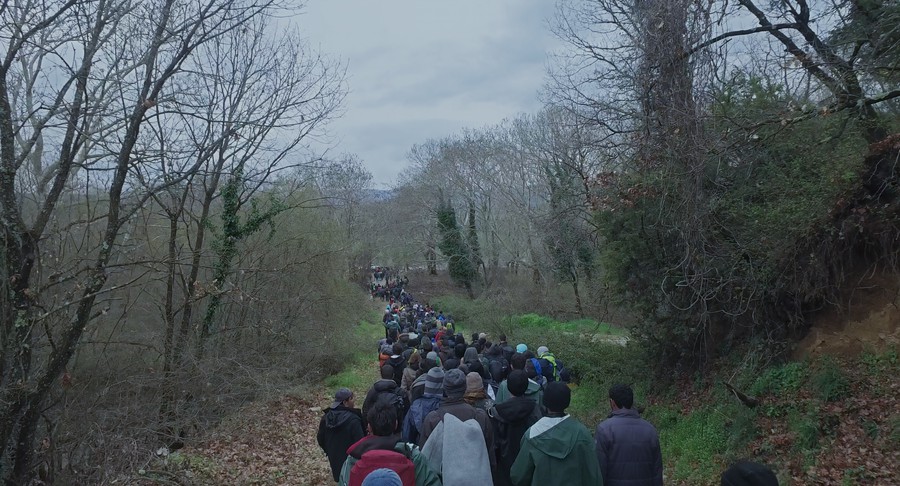 A still from the film.

Last Sunday, UChicago Arts hosted renowned dissident artist Ai Weiwei at the Logan Center for the Arts for a Q&A session and screening of his 2017 documentary Human Flow. The event was part of a national screening event at more than 40 institutions and community centers. The Q&A, moderated by Seemi Choudry of the City of Chicago's Office of New Americans, was webcast live to these spaces across the country.

Examining an exhaustive list of the issues refugees and internally displaced peoples face across the globe, the film first premiered at the 74th Venice International Film Festival last year. Ai and his team, over the span of a year, filmed 900 hours’ worth of footage across 20 countries, interviewing U.N. officials, representatives from human rights organizations, refugees, and asylum-seekers. The film documents the trauma and suffering faced by refugees in a world increasingly hostile to their existence. According to the UNHCR, 28,300 people are forcibly displaced from their countries of origin every day; under President Donald Trump’s new immigration mandates, the U.S. is expected to take in 45,000 refugees in the 2018 fiscal year, the lowest since 1980.

Executive Director of UChicago Arts Bill Michel stressed in his introduction that the screening was meant to be a “day of action,” and expressed his hope that the audience would be moved to explore volunteering and other opportunities with immigrant rights organizations after watching Human Flow. Ten such organizations tabled outside the room, including the Hyde Park Refugee Project, Heartland Alliance, the Illinois Coalition for Immigrant and Refugee Rights, and Exodus World Service.

In an e-mail to The Maroon, Leigh Fagin, Deputy Director of Programming and Engagement at the Logan Center, noted that the University was approached by Participant Media, the production company behind the documentary, to host the live Q&A with Ai.

“We made sure a large block of tickets was available for students, staff and faculty at both institutions, as well as free tickets [for] the public,” Fagin said. Additional support for the event was also provided by the School of the Arts Institute and the Pozen Family Center for Human Rights.

A prolific filmmaker and sculptor, Ai Weiwei first rose to international prominence in 1995 with his performance piece “Dropping a Han Dynasty Urn.” Tacitly left alone by the authoritarian Chinese government, he was the artistic vision behind the Beijing National Stadium. He later achieved notoriety for his activism in China, especially for his investigative work into the corrupt and shoddy construction practices in school districts that led to thousands of children’s deaths during the 2008 Sichuan earthquake. Ai has since moved to Berlin, after being beaten, forcibly put under house arrest, and even illegally detained by the Chinese government for three months in 2011.

The screening was a highly anticipated event, and tickets sold out within the first five minutes of their release. The hall was not packed, however, and a notable number of seats were left open. Audience members seemed taken by the documentary, and there was a fair amount of audible sobbing in the hall when refugees bore testimony about the amount of suffering they had experienced in attempting to escape from the wrenched conditions in their home countries.

Notably, Ai took videos of himself interacting with refugees, including an instance where he showed himself dragging a Syrian refugee to shore with one hand and filming himself with his iPhone in the other. Another showed him joking about switching passports (and nationalities) with an asylum-seeker, concluding that Ai “[respects him] and [respects his] passport.” These videos were compiled alongside soaring drone shots of migrations and refugee camps.

For his part, Ai emphasized in the short Q&A that Human Flow was meant to be a film that “relates to how we look at ourselves.” Ai noted that the documentary was borne out of his personal identification with refugees fleeing their country of origin, as his family was exiled to the borderlands of China during the Cultural Revolution the year he was born.

Indeed, Ai’s emphasis on humanity would recur throughout the Q&A.

“We need to re-look at humanity,” he said when asked about what he hoped the audience would take away from watching the documentary. “If we don’t defend the most basic values, [the situation] is only going to get worse. The film is not asking for mercy, it’s asking for responsibility on part of the viewer.

“I think everybody can do something about [the refugee crisis]”, Ai said in closing. “We must not give up.”