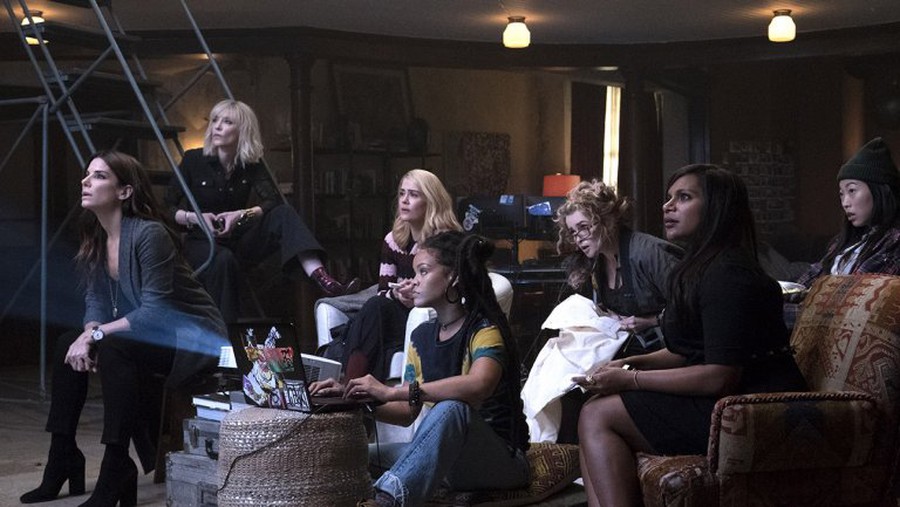 Everyone knows what gets worn to the Met Gala, but no one knows exactly what happens at the event. It’s not like an awards show, where the social media buildup to the prime-time event is the red carpet. For the Met Gala, the outfits are the whole show. In some ways, Ocean’s 8 mirrored its setting: the hype around it and its cast interviews (including a memorable one in which Anne Hathaway tells Ellen about Rihanna complimenting her butt, and another one where Sarah Paulson says she kept singing Rihanna songs badly on set, in front of Rihanna) have almost eclipsed the film itself.

The film, which is about Debbie Ocean (Sandra Bullock) and a crew of women robbing a $150 million diamond necklace at the Met, was so star-studded that watching it was like watching the Met Gala red carpet—or, let’s be real, scrolling through Twitter as people talk about the Met Gala red carpet. Every scene reminded me of how I felt gossiping to my friends about what we thought of Sarah Jessica Parker’s headdress this year. I felt a rush of pure glee watching Cate Blanchett ride on a motorcycle in a glittery jumpsuit and seeing Helena Bonham Carter, a seasoned actress, pretend to be in way over her head with the press. Every second was packed with snappy dialogue and class acts: standard heist movie fodder.

However, there were still moments where the film seemed to run out of star power. When Lou (Cate Blanchett) suggests to Debbie that she should consider a male addition to her crew, Debbie replies that she wants women because “a him gets noticed, a her gets ignored. And for once, we’d like to be ignored.” While the feminist nod received a lot of applause in my theater, the line felt a little forced—don’t we all know that the appeal of the Met Gala is seeing the creative outfits that are almost exclusively worn by women? Nonetheless, Debbie’s plan does reveal the ways in which some women are ignored—while she and Anne Hathaway swan around in elaborate gowns during the heist, the women of color go undercover in service positions. It’s not a revelation that Ocean’s 8’s feminism seems only skin deep, but it does show how the movie is meant to entertain rather than instruct.

Ocean’s 8 is not a movie that tries to complicate itself—and that’s not entirely a criticism. Other heist movies often rely on the cerebral satisfaction of being able to see a long, elegant trick. Accordingly, many lukewarm reviews of Ocean’s 8 have argued that the film’s reliance on advanced, wish-fulfillment technology makes the success of the heist feel unearned. However, the film seems to riff a little on the silliness of the heist genre. In a movie full of dazzling objects based on fashion’s most glamorous nights, the necklace that’s supposed to be stolen is one of the ugliest things there. Even more, Ocean’s 8 changes up the rules: The success is that it’s more of a movie with a heist in it—the real star of the show is simply being able to see the stars. The main cast was electric, and they all complemented each other—the friendship between Debbie and Lou was particularly authentic, even if seeing Awkwafina teach Mindy Kaling how to use Tinder felt like low-hanging fruit. For an ensemble movie the film fleshed out each of its eight characters enough that you could root for their success: The scene of the crew glamming up the subway feels wild and very earned, not because it shows the success of the heist, but because it makes these stars, even in their over-the-top formal wear, feel so human. The all-women reboot genre could easily fall into the trap of trying to “outdo the men” at their own game, but Ocean’s 8 resists this trope. The luxury of watching an action movie where women aren’t pushed to the side is undeniably reassuring.

Meeting each of the characters and following them through the movie felt like slowly making friends with the coolest girls in your class—there are about four moments of being overwhelmed before you unexpectedly meet their bratty younger sister on the street and can finally see how they’re a real person. In that way, Ocean’s 8 seemed to approach the heist movie genre in the same way that the Met Gala press approaches elite events: It’s not about showing people what happens inside the party or in a great heist. It’s about the luxury on the other side—being able to declare that you loooooove Anne Hathaway over Milk Duds with the person next to you while watching other people have to look nice and wear uncomfortable shoes.