Several alumni circulated a petition in support of a CBA leading up to Alumni Weekend. 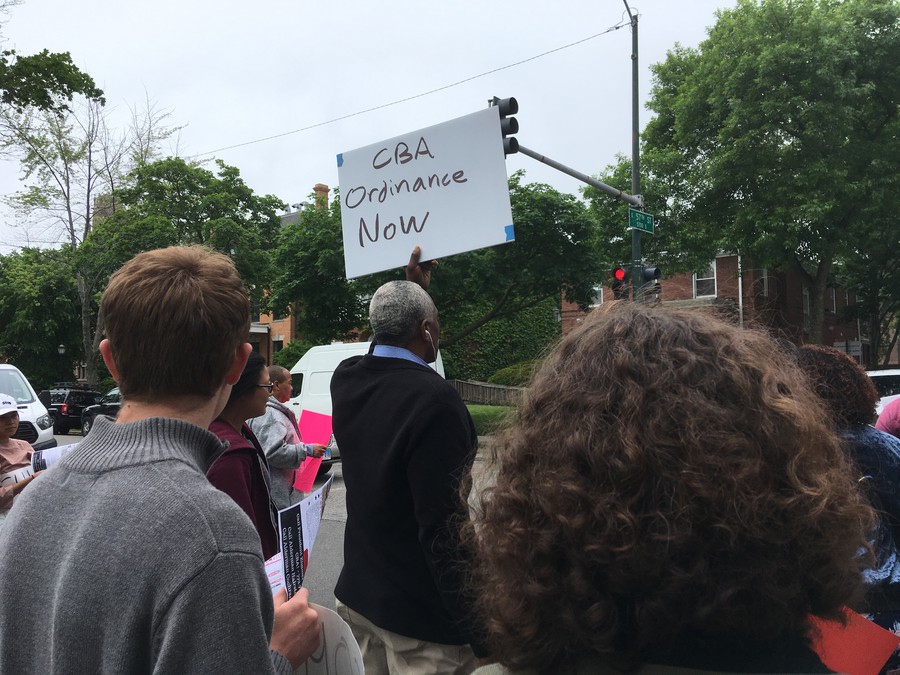 Members of the CBA Coalition march towards Alumni Weekend celebrations on the Quad.

UChicago for a Community Benefits Agreement (CBA) and Southside Together Organizing for Power (STOP) held a march and rally at the center of the quad during Alumni Weekend celebrations Saturday morning.

Throughout the march, which began at 60th and Woodlawn and ended on the quad, protesters chanted, “Whose community? Our community! Whose streets? Our streets! No CBA, no peace!”

UChicago for a CBA and STOP are part of the CBA Coalition, an organization of community groups that has been demanding the city pass a CBA ordinance in response to the impending construction of the Obama Presidential Center in Jackson Park. The ordinance would bind developers of the Center—including the City of Chicago, the Obama Foundation, and the University—to help provide affordable housing, employment, and other opportunities for local residents.

The CBA Coalition most recently protested at last week’s City Council meeting, in which aldermen approved $175 million in spending on projects related to the construction of the Center.

Alex Goldenberg, an organizer with STOP, previously told The Maroon in an interview that while City Council is the group that ultimately decides on passing the ordinance, City Council would be more likely to pass it if the University gave its public approval.

The CBA Coalition has not seen support from aldermen, the Obama Foundation, nor the University regarding a CBA ordinance. The Obama Foundation published a Community Commitments document in early May, which it said was a response to community members’ requests for guaranteed local benefits.

As the march approached the center of campus, the protestors received thumbs-up and cheers from passersby. Alumni at different tents lining the walkways offered water and food to protesters.

Shania Doyle, a Hyde Park Academy sophomore and an organizer with STOP, spoke at the center of the quad about how a CBA would ensure benefits from the OPC reached nearby communities.

“We need a CBA because we don’t want the library to come and push our people out of our homes and not offer them the jobs they need,” she said. “The reason we are marching today is so our voices can be heard.”

Leading up to Alumni Weekend, several alumni circulated a petition which asks the University to support a CBA. Natalie Naculich (A.B. ’17), one of the petition’s signatories, said that the protest was meant to challenge the polished image of itself the University presents on Alumni Weekend.

“Alumni Weekend is a time when the University cares a lot about their image, and I think it’s important that we’re out here reminding people that while the University does a lot of great things, it also has caused a lot of displacement and criminalization and violence…against South Side residents,” Naculich said after her speech.

Naculich said that a CBA could help address calls for reparations to local, predominantly black communities by providing for local hiring, rent control, and neighborhood stabilization. The call for reparations is based on donations to the first University of Chicago from Steven Douglas, who was a slave-owner, and on the damage caused by the University’s past urban renewal campaigns and projects. In the 1960s, the University undertook one of the nation’s largest urban renewal projects, redeveloping whole blocks of buildings in Hyde Park. After the project, Hyde Park’s African-American population fell by forty percent.

Naculich said that the CBA could reverse some of the University’s damage to the South Side.

Daphne McKee (A.B. ’17), who wrote the alumni petition, said that she got involved in CBA organizing after moving to Woodlawn and seeing signs of impending buyouts in the neighborhood, beginning with a local grocery store. Her friends in housing advocacy linked the change to the arrival of the Obama Center.

“I want to show the University that if we’re invested enough to keep coming to these events and stay active in alumni organizations and give to the University, we’re also invested in keeping them accountable and responsible and making sure that they’re actually beneficial to the world and Chicago,” McKee said.

By Alexandra Nisenoff and Grace Hauck

Activists, residents and officials gathered in City Hall on Thursday afternoon for the Plan Commission meeting to vote on zoning and road changes for the Obama Presidential Center.