Hannah Gadsby Makes you Laugh and Listen up in "Nanette," a Netflix Stand-up Special 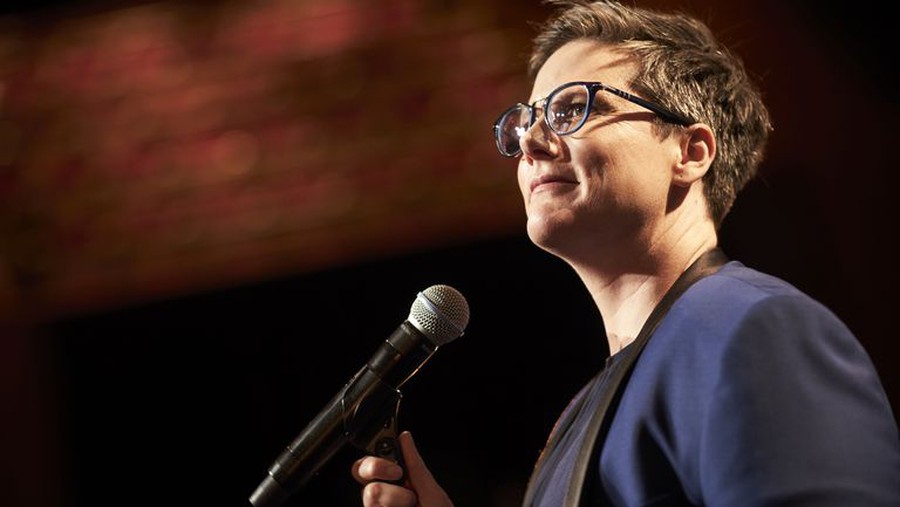 Australian comedian Hannah Gadsby’s Netflix debut, Nanette, is named after an interesting woman. The special’s namesake is apparently a barista whom Gadsby met in her small hometown. “I thought I could get an hour of laughs out of her,” Gadsby says. “I was wrong.” Gadsby sets it up early that this special, while being her introduction to many American audiences, is her last hurrah. She’ll be quitting comedy after this, just the check please.

Gadsby, who identifies as a lesbian, draws from her experiences such that her queerness is used as fodder for jokes. Her opening jokes are case in point. "Where do the quiet gays go?" she asks, watching Mardi Gras—Australia’s Pride parade—for the first time. The Pride flag is a "bit busy," she quips. "I sexually identify as tired." She is self-deprecating and observational, with a gentle delivery. She does not gesture so much as fidget, and her wry punchlines find their home in the grey area between better-than-you American and wry British. (Is this grey area Australia? We may never know.)

These opening jokes create Hannah Gadsby The Comedian, and her evident expertise in constructing a jokey, one-dimensional personality to diffuse her audience’s tensions and heighten our engagement. The same humor-as-a-path-to-sincerity trick is used to make the wedding episodes of your favorite sitcoms feel satisfying. Even the most emotionally stunted of us was able to feel sincere when Ben and Leslie tied the knot in Parks and Rec.

"Do you understand what self deprecation means when it comes from somebody who already exists in the margins?” asks Gadsby. “It's not humility. It's humiliation. I put myself down in order to speak, in order to seek permission to speak."

Jokes, the adage goes, are tragedy plus time. In that time, the comedian must voyeuristically boil the experience down into a premise and a punchline. Joke-making is a process of essentializing, and Gadsby says that performing that essentialized version of your life, over and over again to get laughs, has the effect of “freezing an experience at its trauma point.” Then, she draws the critical contrast: jokes have two parts, while stories have three, a beginning, a middle, and an end. That third part, the ‘end’ that differentiates a story from a joke, is what Gadsby seeks with this special. She calls this ‘end’ many names: hindsight, context. Perhaps it is also catharsis. In the bulk of Nanette, Gadsby returns to those opening jokes and turns them into stories, creating tension that is neither consumable nor palatable. In an opening joke, for example, a man is angry because Gadsby is talking to his girlfriend but backs off upon realizing she's a woman. The story picks up where the joke ends: he comes back, calls her a lady faggot, and beats her. She doesn’t even go to the hospital. "This tension is yours,” she says. “I'm not helping you anymore."

Nanette is the catharsis of Hannah Gadsby’s life story, properly told. But, interestingly, it doesn’t feel like the grenade it could be, thrown with intention to wound the bunker of brown haired boys who wear glasses and do improv that we call comedy. Gadsby, paradoxically, expresses Nanette’s purpose clearly: she says that she performs not for money, not for reputation, not for blame, not even for anger. “I take my freedom of speech as a responsibility, and just because I can position myself as a victim does not mean my anger is constructive,” she says. This is the hindsight of a child once soaked in shame, now impatient with the society that perpetuates her trauma. "To be rendered powerless does not destroy your humanity. Your resilience is your humanity,” she says. “What I would have given to have heard a story like mine."

Nanette would have been good if it ended after the first twelve minutes, and Nanette would have been powerful (in the vein of Mike Birbiglia’s work, or Hasan Minhaj’s Homecoming King) if it had ended with Hannah Gadsby's story, and some exploration of what she does by using jokes to diffuse a tension around yourself. But Nanette does not stop at the personal. Gadsby uses herself as an example to push a much broader topic: how we tell stories of creativity people. “This is the furthest I’ve seen stand-up pushed,” NPR’s pop-culture commentator noted.

She broaches cultural commentary by distinguishing between what might crudely be called “high” and “low” art by placing comedy in the latter. Her academic background, however, is in the former: she graduated from university with "barely an Art History degree." So she talks about how highbrow art, distinct (she thinks) from what she’s doing, is tied to money and power ("Van Gogh didn't know how to network. He was mental... the turtles knew how to network."), and gender (“Men are concerned with reputation...women are just flesh vases for your dick flowers”). This somehow all comes together in a magnificent bit about cubism: "So many perspectives, but are any of them a woman's?"

Nanette will change the way we think about stand-up comedy, and hopefully, also the way the marginalized perform it. With Nanette, Gadsby has created a vocabulary for comedy that centers the thoughts of marginalized people without apology. “I’m sorry I’ve upset things,” the outro music baubles, as we cut to Gadsby’s home. She takes a seat on her couch with her dogs by her side.