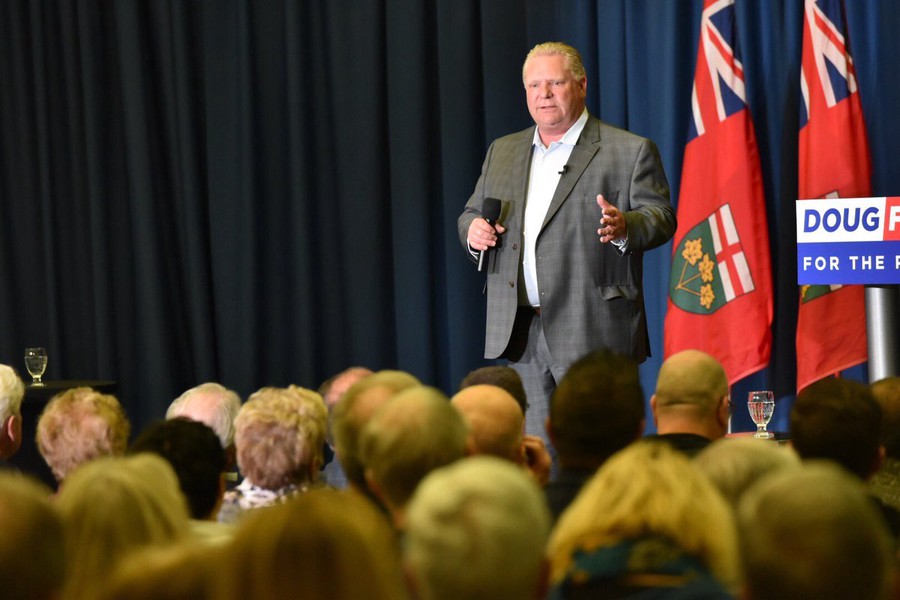 Doug Ford campaigning in Sudbury, Ontario on May 3, 2018.

The Ontario government is requiring the province’s publicly funded colleges and universities to develop a public free speech policy that adheres to the Chicago Principles by January 1, 2019. Institutions that fail to meet this requirement may suffer funding cuts.

The move fulfills a promise that Ontario premier Doug Ford—a conservative who is often compared to President Donald Trump—made during the provincial election earlier this year. In that election, Ford promised to ensure that free speech was protected in educational institutions across the province, following several conservatives being disinvited from or harassed at speaking events on Ontario campuses in the past decade.

However, the move would be the largest-scale application of the Chicago Principles so far—Ontario is Canada’s most populous province, with a population of 13.6 million according to a 2014 census. Early last year, California’s legislature passed a bill urging the state’s universities to draft free speech policies in line with the Chicago principles, but the resolution was nonbinding.

Ontario may just be a starting point for Canadian conservatives. Andrew Scheer, the Conservative Party Leader opposite to Prime Minister Justin Trudeau’s Liberal government, said last year that he was working on a proposal to retract federal funding from universities across Canada if they don’t protect campus free speech. Scheer said that free speech was being stifled on campuses across the nation.

“I think the stifling of free speech is of growing concern to many people on all sides of the political spectrum,” Scheer said in an interview on an Ontario radio station.

This isn’t the first time the Ford family has made headlines across the border. Premier Ford rose to national prominence in part due to his late brother Rob Ford. Rob Ford, the mayor of Toronto from 2010 to 2014, made international headlines in 2013 when a cell phone video surfaced in which he smoked crack cocaine and commented, while high, on political issues.

The campaign encourages universities across the nation to adopt the policy.