HPA Gets $40 Million for Improvements, Was Obama's Center a Factor? 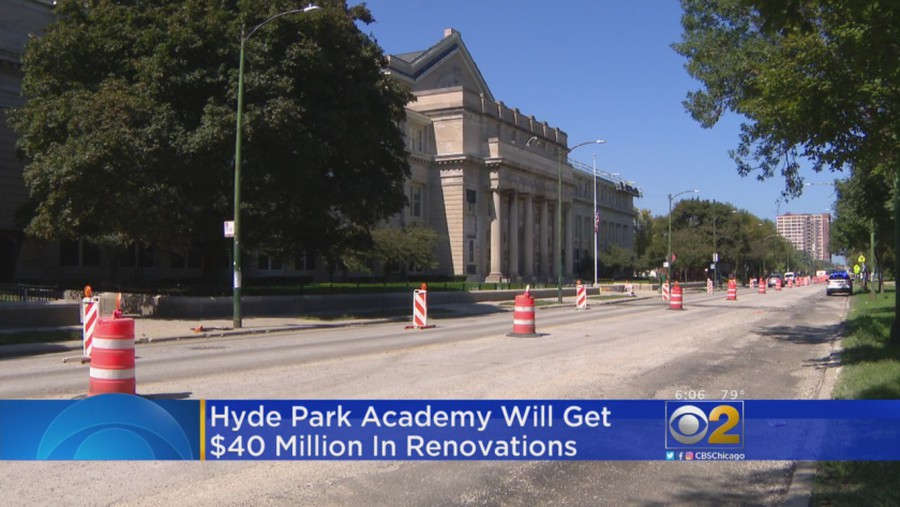 A frame from CBS 2 Chicago's coverage of the announcement.

HPA had already put some of the money, which was approved in two chunks over the past year, toward fixing a long-leaking roof, repainting classrooms, and installing new lights.

Principal Antonio Ross said, according to the Sun-Times, that he thinks the location of the Obama Presidential Center (OPC) near the school spurred the investment.

Jackson said, “There are new things happening in this community with the Obama library, and we’re all excited about that, but we also want to respect the institutions that have been here educating kids for hundreds of years and making sure there’s a good synergy between the two.”

An Obama Foundation representative told The Maroon that they didn't speak to the city about this announcement. The representative said they are always happy to see their neighbors at HPA being supported.

Fifth Ward Aldermanic candidate Gabriel Piemonte was part of a group this past spring that shared a “leak” alleging that developers were anticipating Hyde Park Academy would be sold. At a press conference hosted by the Kenwood-Oakland Community Organization, organizers said that the land would be sold due to its proximity to the site of the Obama Presidential Center.

Piemonte, who thinks that CPS is investing in HPA to provide the OPC with more capital resources nearby, was skeptical of the reasoning Jackson offered for HPA’s sudden windfall.

“There’s a local school council, but we’ve heard nothing about this! This is the mayor showering money on HPA,” he said. “[Emanuel’s] agenda has been about directing resources to people he’s directly connected to.”

Principal Ross told the Sun-Times that he was unsure as to the reason for the investment, but thinks “[HPA’s] new neighbor helped a lot.”

Emanuel, who recently announced he would not seek a third term as mayor, served as White House Chief of Staff under President Obama. Piemonte links Emanuel’s legacy to that of the arriving OPC, and to the Obamas.

Piemonte said the announcement was surprising to Ross and to other attendees at Tuesday’s press conference. He said this represents a lack of community control over spending on schools.

“Principal Ross, in his interviews with the media, sounds like he won the lottery. [The roof] has been leaking for 8 years,” Piemonte said. “Those kids are not at the center of that announcement.”

Piemonte believes Emanuel and Jackson are thinking about their legacy relative to the OPC.

“It’s about the building. That’s where they’re putting the money. Emanuel wants to make sure [that] the building is in excellent shape so whatever the OPC wants to do… they have a great facility to do it in,” he said.

By Caroline Kubzansky and Pete Grieve

CPS e-mails obtained through a records request show how officials responded to a seemingly untrue allegation that Hyde Park Academy High School will be closed.