The Curious Case of Chicago's Offense 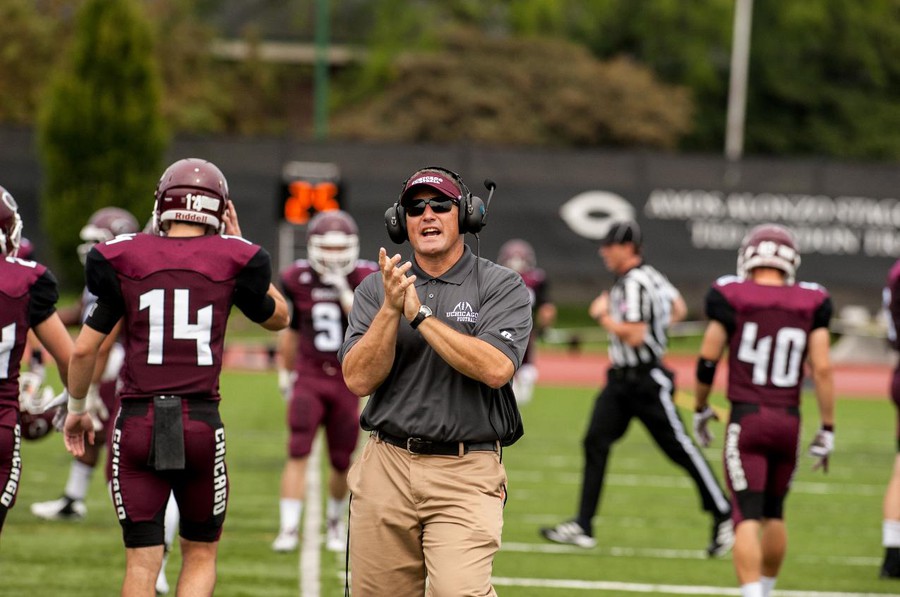 Chris Wilkerson has been the head coach of the Maroons for six seasons.

When the clock wound down and the football game between the University of Chicago and Simpson College came to an end on Saturday, September 8, the scoreboard projected an embarrassing number on a dreary Chicago afternoon: zero. The Maroons lost 21–0 and the offense had been shut out in the team’s home opener against a Simpson team who won just five games a season ago.

It was a particularly low moment for the Maroon football program, whose offenses have gone through a never-ending cycle of coaches, schemes, and players these past four seasons. Years of frustration culminated in a performance where the Maroons posted 189 yards of offense, two interceptions, and a time of possession of just 27 minutes and 41 seconds. The quarterbacks combined for a 47 percent completion rate, and the offense as a whole converted only one third-down of its 14 opportunities.

One week before, the offense strung together 17 points and 233 total yards against rival Wash U. Better numbers, sure, but still bad numbers. Somehow, the Maroons rushed for just one net offensive yard on a whopping 26 attempts.

The Maroon offense is struggling under second-year offensive coordinator John Pont and Chicago is off to its second 0–2 start in as many seasons under head coach Chris Wilkerson.

This turnover has been a constant source of frustration for the program, particularly on the offensive side of the ball. Just three years ago, Chicago entered the 2015 season with longtime offensive coordinator Craig Knoche calling the offense. After posting an 8–1 record the previous season and winning the UAA title, expectations were high for the Maroons and Knoche’s offense featuring new starting quarterback Burke Moser.

The team regressed. The Maroons went 6–4 on the season while putting up respectable offensive numbers: 25.9 points per game, 382.4 yards per game, and an average time of possession of 30:21. When the team started practice in the spring, however, an unexpected announcement was made: Knoche was not to return to the program and thus the Maroons entered the summer without an offensive coordinator.

The story behind Knoche’s exit from Chicago after seven seasons is still unknown, as it happened suddenly and without explanation. What is known is that he lived in Chicago with his family, and his wife, Carissa Sain Knoche, is still the head coach for the women’s basketball team, a role she has had since 2012. Knoche was immediately hired by Wabash College to be their offensive coordinator, and Wabash has seen enormous success under him: posting back-to-back 8–2 records while averaging 30 points per game from 2016 to 2017 with a 3–0 start in 2018.

Going into the summer, the team didn’t know who their coach was going to be or what offensive scheme they were going to run. The search had to occur off-cycle, as the typical hiring-cycle period for football coaches took place months earlier. Finally, less than two months before kickoff of the 2016 season, Chicago announced Knoche’s successor: John Bear, after Bear had been let go by North Park University after serving as their offensive coordinator from 2013–15.

The hire marked a sudden shift in offensive philosophy—while Knoche had run a pro-style, ball control offense designed to control the game and the clock using a balanced attack with tight-ends and fullbacks, Bear ran an up-tempo, spread offense designed to use speed and simplified concepts score a lot of points, and score those points fast.

The end result was once again regression. This time the Maroons dropped to 4–6 on the season, but the offense put up some impressive numbers. Moser, in his second and final season as the Maroons’ quarterback, passed for a school-record 3,766 yards and 30 touchdowns as the Maroons averaged 485.6 yards per game, a remarkable uptick in production.

The sheer volume of offensive yards did not translate into comparable points, unfortunately, as the Maroons averaged 30.6 points per game and a lowly 27:46 average time of possession. As a result, the defense was on the field for the majority of season, and the team was outscored 360–306 over the course of 10 games.

The production looked nice and the team got worse, but then the program hit its lowest point under the Wilkerson regime: First-year offensive coordinator John Bear got into an altercation with a parent following the season-ending loss to Wash U. An irate Bear had to be restrained by players and coaches in front of the entire stadium. The events of that day are still being felt, as Bear is now entangled in a legal battle with the University of Chicago.

Pont was left with the fallout of John Bear and a 4–6 season: 10 offensive players who were set to return quit the team, including the starting center and offensive tackle, while two more offensive players switched to defense before eventually quitting the team as well.

With the Maroons looking to replace Moser, a quarterback battle was expected between second-years Brian Collis and Marco Cobian. In a surprise move, however, Pont chose then first-year Campbell Garrett to be the starting quarterback for the 2017 season. Garrett was surrounded with elite offensive talent, with record-breaking running back Chandler Carroll and an elite trio of wide receivers: the uber-athletic Jamie Rieger, UAA Rookie of the Year Dante Nepa, and Honorable Mention All-UAA Trevor Anderson. The final result was bad: Garrett averaged just 134.7 passing yards per game with 12 touchdowns and 14 interceptions on the season.

The team’s points per game dropped to 27.3, but that doesn’t depict the unfortunate reality. 110 of the team's 273 points came in blowouts over conference bottom-dwellers Beloit College (1–9) and Cornell College (4–6). The resulting points per game over the team’s other eight games was just 20.3. Pont and the offense turned to Carroll almost exclusively for production, handing him the ball 258 times for 1,249 yards and 16 touchdowns.

After the 2017 season in which the Maroons returned to their 6–4 record from two seasons before, both starting quarterback Campbell Garrett and backup Brian Collis quit the team. The University of Chicago has taken the unusual step of retroactively removing these players from their 2017 team roster online.

“When I first got here the offense was pretty complex under Knoche and there were a lot more details we had to pay attention to,” said former wide receiver Drew Falk. “With Bear it was a really simple up-tempo offense with less nuances and I think Pont is a combination of both.”

As the season progresses, Pont and the offense need to find an identity which fits the team’s personnel after playing three different quarterbacks in the first two games. Consistency is necessary to succeed in football, and from the top down the Chicago offense has been a volatile rollercoaster struggling to find its way since that championship season just a couple years ago.