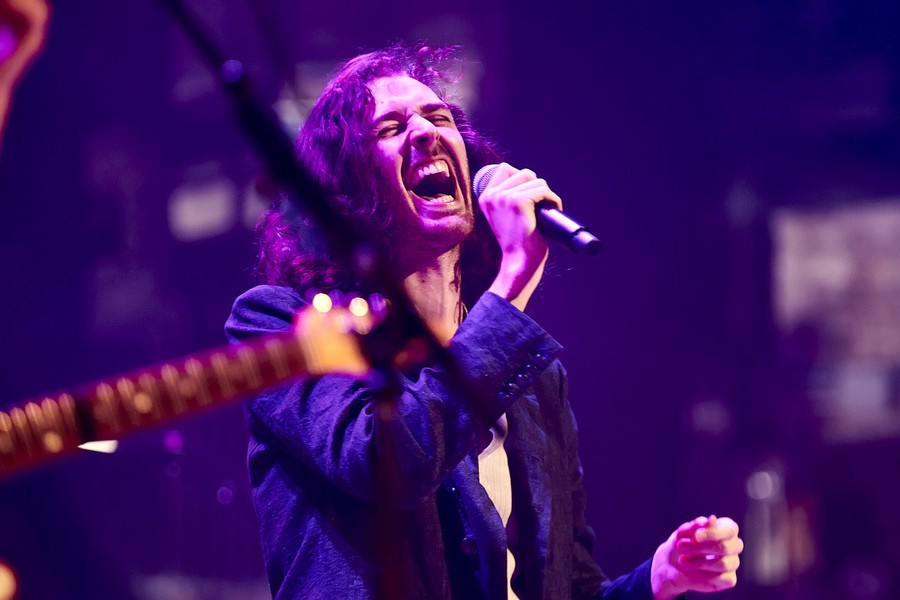 Four years have elapsed since Hozier released his debut album, Hozier. But that hit album, along with the promise of his new EP Nina Cried Power, has not been forgotten by his growing fanbase, who sold out the Riviera Theatre last Friday night.

“Before I could talk or walk, the music that was born in Chicago was the soundtrack to my childhood,” Hozier announced to the cheering crowd. “If it weren’t for this city and the music that it cultivated…I wouldn't be a musician.”

It was fitting that Hozier’s opening act was the Irish folk duo Hudson Taylor, who warmed up the crowd with their lively sound and polished harmonies. Like the duo’s hit song, Hozier is an “old soul,” and his musical inspirations speak to it.

Hozier’s recent collaboration with Chicago-based R&B legend Mavis Staples demonstrates how deep his musical roots run in the Chicago blues and gospel tradition (his father was also a blues drummer). “Nina Cried Power,” the titular single on his new EP, features Staples and is an anthem for protest artists such as Nina Simone, Billie Holiday, Woody Guthrie, and James Brown. A modern-day protest song about the “human spirit ringing,” “Nina Cries Power” was the best song to kick off Friday night’s concert: It highlighted how Hozier has never been afraid to combine music and politics—and sing it at the top of his lungs.

Given Hozier’s powerful vocal chords, his dynamic band, and the encouraged crowd participation, the concert was wonderfully loud. An amused Hozier invited everyone to sing along to the beginning of “To Be Alone With You,” and described the audience’s “noisemaking capacity” as “just fantastic.”

And yet, heavy tunes contrasted with songs like the lovely and melancholy “Someone New”—about falling in love “just a little bit / Every day with someone new"—which was jazzier and more delightful live. It spoke to Hozier’s versatility: He can at once bring the house down with a banger and have everyone dancing along to a bop like “Jackie and Wilson.” Another memorable track was the soft “NFWMB,” which Hozier summed up as a “love song for the end of the world” (trust him to make the f-bomb sound pristine). The song’s lyrics, which include both "a gentle sound" and "thunder under earth," fittingly capture the quality of its songwriter’s voice. The combined strength of Hozier’s acoustic-heavy instrumentation and his sonorous vocals emerged majestically in his new song “Shrike,” named after an animal he called “a gorgeous vicious little bird prey.” “Gorgeous vicious,” like the juxtaposed “warmth” and “scorn” in “Shrike,” is a striking oxymoron that applies to some of Hozier’s songs, which are loaded with both beauty and darkness.

Indeed, Hozier’s lyrics are hard to catch during live performances, but even after you learn them, they take some time to unpack. Beneath the gentle melody and acoustic tenderness of “Cherry Wine,” for instance, is a heartbreaking story of an abusive relationship. The song, which was aptly performed under blood-red lights on Friday night, was the most moving moment of the concert. Hozier’s immaculate guitar plucking, backed up by the previously rowdy audience now singing along softly, brought the concert hall to a gentle lull.

Fans have likened Hozier to an “Irish Jesus,” and the biblical imagery in his songs as well as his shoulder-length curly hair play no small part in that comparison. There was certainly something holy about the Riviera on Friday night as a sold-out hall sang the word “amen” along with him during “Take Me to Church.” The song, however, is a powerful critique of the church’s discrimination against the LGBTQ+ community, a theme that may elude listeners who take the lyrics at surface value or ignore the song’s music video.

As the song that kickstarted Hozier’s career, “Take Me to Church” is perhaps also the song that burns him out. The worldwide hit concluded his setlist (before he returned to the stage to play two welcome encores, “Like Real People Do” and “Work Song”), and was clearly the most anticipated performance of the evening. And yet, it seemed far from the most impassioned performance of the evening, lacking the fire he delivered in “Nina Cried Power.”

With his upcoming album, we can expect Hozier to bring back much of his familiar sound, but perhaps in a more mature and reinvented form; the opening of “Shrike” sounds uncannily like that of “Cherry Wine,” for instance, just as “Moment’s Silence (Common Tongue)” somewhat resembles “Arsonist’s Lullaby.” It seemed no coincidence that these songs were paired with each other during the setlist, as if to complement each other. But the newer songs carry a deeper, more haunting quality. Toward the end of the night, Hozier played “Movement,” an unreleased track from the upcoming album, that speaks to this feeling: With its subdued verse and bold, rising chorus (Hozier belts, “Move me babe”), the song is bound to be one of the most powerful tracks from the new album, marking Hozier once again as an artist—and activist—to be reckoned with.