Counting the Days on Ancient Mesoamerican Calendars with Claudia Brittenham 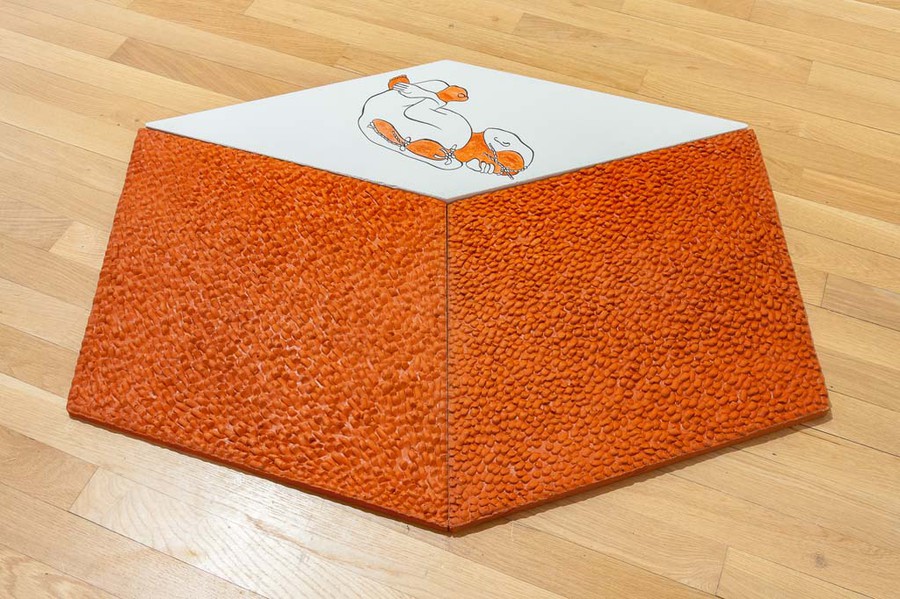 “Einstein was not the first person to say that space and time were connected; the Mesoamerican expression of this was just a little bit different,” quipped Claudia Brittenham as the audience’s laughter echoed through the gallery. Time and space converge in Mariana Castillo Deball: Petlacoatl, a contemporary exhibition based on Mesoamerican rituals, which closed on January 13. Two days prior, Brittenham, associate professor of art history at the University of Chicago, visited the Logan Center Gallery to deliver a talk about the relevance of ancient Mesoamerican codices to Deball’s work. A specialist in pre-Columbian Mesoamerican art, Brittenham illuminated the anthropological and ethnographic research that informs Deball’s practice.

Petlacoatl takes its name from the Nahuatl word meaning “mat woven of snakes pointing in all directions.” The image adorns ancient divinatory calendars as an omen that presaged either the impending demise or rise to power of the person who sits on the mat of snakes, which resembles a throne. The exhibition consists of several components that at first seem unrelated. On one hand, massive metal sculptures covered with holes scale the walls of the gallery and fold in jagged angles like crumpled paper. Much less daunting are the playful watercolors on the walls and colorful concrete tiles on the floor. However, once one begins to understand the depth of material and immaterial connections in Mesoamerican knowledge systems, the connections between the pieces become clear. Still, Brittenham emphasized that Deball’s work is far from esoteric: “Petlacoatl is a work of research, and at the same time it is contemporary art…. You could see this exhibition and love it even if you aren’t a Mesoamerican calendar priest.”

Whether one dies or becomes a king when they sit on the petlacoatl––mat of snakes––is predetermined. For the Mesoamericans, one’s entire fate is written in a 260-day divinatory calendar called the tonalpohualli, which marks the days with objects from the natural world. Brittenham explained, “There’s a sense of space and time and fate all being linked together.” On the tonalpohualli, each day corresponds to a number (1–13) and one of 20 symbols (crocodile, wind, water, etc.) for a total of 260 dots that snake around the page in a cross shape. At the center of the cross stands Xiuhtecuhtli, the Aztec god of time. In Mesoamerica, the middle was a fifth cardinal direction alongside north, south, east, and west. In placing Xiuhtecuhtli there, the Aztecs allowed time itself to define the space. They also incorporated all of the sacred animals, world trees, and gods into the calendar, orienting the material realm in time.

In Petlacoatl, the dots from the tonalpohualli––the days themselves––come to life and manifest in the gallery, embodied in the perforated metal strips crisscrossing the room as well as the watercolors on the walls. The turquoise, yellow, and textured red tiles embody the rituals that mark the passage of time––as the harvest approaches and the maize ripens from green to yellow, the stark red blood of sacrificial victims is spilled. Through all of these choices, Deball’s artwork blurs the line between time and space, just as the Mesoamericans did centuries ago, and she does so in a way that is both respectful and provocative.

“One of the greatest challenges of bringing ancient art into the present is this question of how you can do something that isn’t just a sterile recreation of something in the past, but something generative,” said Brittenham, “something that takes past ideas and makes them present, makes you look and think about them.” Deball, it seems, has done just that.