From 'Thirty Million Words' to Just Two: I Do 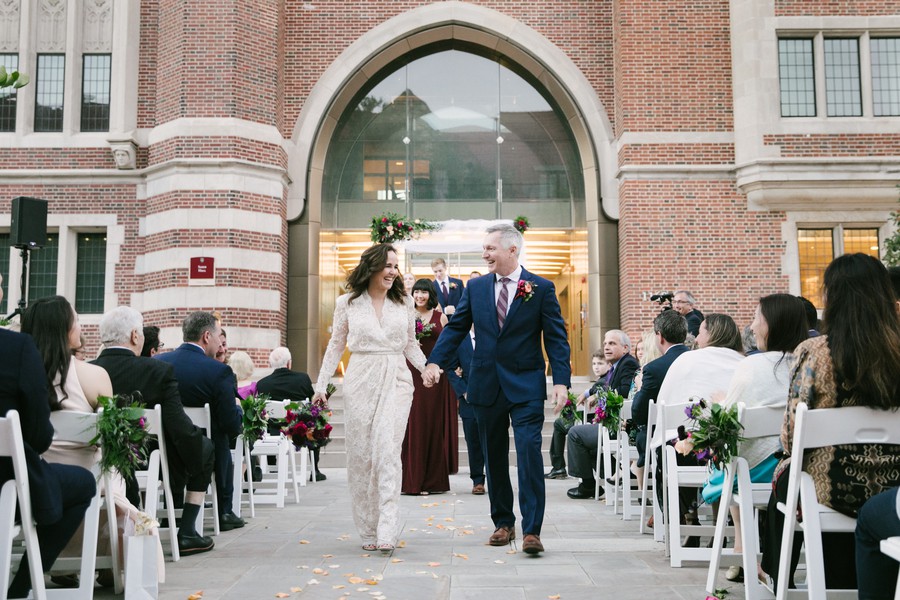 Last summer, the co-directors of the TMW Center for Early Learning and Public Health, John A. List and Dana Suskind, were married outside of Saieh Hall. “John courted me with spreadsheets and hypotheses,” Suskind recalled.

List, the Kenneth C. Griffin Distinguished Service Professor in Economics and the College, was the chairman of the Department of Economics from 2012 until this spring and has been teaching at the University since 2005. He is a pioneer in the field of experimental economics and has worked with a litany of companies ranging from Lyft and Uber to Virgin Airlines.

In addition to being the co-founder and co-director of the TMW center, Suskind is the Director of the Pediatric Cochlear Implant Program at the University of Chicago Medical Center. The author of Thirty Million Words: Building a Child's Brain, Suskind has devoted her career to optimizing foundational brain development as well as preventing early cognitive disparities and their lifelong impact.

In 2009, Suskind started her research program, Thirty Million Words, after observing that some of her cochlear implant patients were still not as capable of processing language as their peers. Through her research, Suskind has found that “differences in early language environments are the root cause of education disparities in this country.” To address these disparities, the TMW Center has worked with parents and caregivers to increase exposure to language for disadvantaged children.

While Suskind was working on Thirty Million Words, which focuses on the first three years of life, List was researching early childhood education for children between the ages of 3 and 5 years old. His work uses field experiments to determine important factors in the education production function.

“So we were each doing our own independent research—both interested in parents of caregivers, specifically on the critical import they have on brain development—and back in 2015 we started intersecting in terms of research and we talked, learned, and discussed quite a bit. And I told John, ‘Honestly I’ve always wanted an early childhood research center that really focuses on the first three years of life,’ and he said, ‘why don’t we do it together? We can do the full zero to five range,’” Suskind said. “As we talked, we realized that there would be significant synergies both in our interests and research, so we started the TMW Center for Early Learning and Public Health.”

For Suskind, who went from being a surgeon and physician to a social scientist, there has been a learning curve in adopting the mannerisms of formal economics. List has helped her adjust. “At our first conference together, Dana was sitting in the front row, and I was sitting in the back row,” List said. “I started picking apart one of Dana’s colleague's work and Dana took exception to that and started arguing against me in front of all these people, not understanding that this is how science is done in economics.”

“The conference actually felt like I was back in the operating room long ago with the lead surgeon saying, you know, ‘don’t hold the scalpel that way!” Suskind said.

Although some married academics might avoid blending work and home life, List and Suskind cherish their combined research. “It is so fun. Some people say they like being able to come home and not think about work, but really when you do something that you love so passionately, number one, it’s not work, it’s life—well, our shared children are our lives—but this is a huge part of our lives and it's so stimulating and positive to be able to talk about these things together,” Suskind said.

The two researchers have very different processes, they said. “We're so aligned in our missions, but our styles are pretty different,” Suskind said. “I think maybe because I’m a surgeon, I’m very process oriented. Once I decide what I want to do I work backwards, building structure, and I surround myself with people similarly process-oriented, whereas John is more willing to jump right into a new idea. So, sometimes John jokes that I plan to plan to plan.”

Together, List and Suskind have eight children from previous relationships, and very different parenting styles. “I like to think I’m more laissez-faire,” Suskind said.

“She’s more like let every flower bloom, and I’m more like the rules are the rules—I believe it’s the right thing to do and you’re going to do it... but I do like our kids showing effort, passion, and internal drive.  I want them to each change the world in their own unique way," List said.

While often children try to avoid the fields of their parents, the same cannot necessarily be said for the List-Suskind family. “So here’s what I can tell you,” List said, “I’m two for two right now. I have two girls who are sophomores at college—one’s at Wellesley and one’s at Yale, and they’re both econ majors, so I’m two for two right now, and I’m looking for six more!”

The couple, who married on campus, say the University has played a very significant role in both of their lives. “If they can allow a surgeon to develop a research career in order to further educational equality, you know what kind of place this is,” Suskind said. Indeed, the couple is so fond of the University that they chose maroon and gray—the University’s colors—as the theme hues for their wedding.

Ultimately, when it came to deciding where to have the ceremony, the choice was obvious: Saieh Hall. List calls Saieh the most beautiful economics building in the world. “I moved the department to Saieh from Rosenwald as chair in 2012, and it has a lot of history. It’s important for the University, but more importantly, it is a special place for us. So what better place?”

“Saieh is where we fell in love,” Suskind said. “It’s where we got to know each other. This is where we not only became close friends, but also bound by this greater ideal of trying to use science to make the world a better place.”