Kevin Bailey, the Democratic Committeeman recently accused by another candidates for fraud in challenging other candidates' petitions, was not present at the forum. 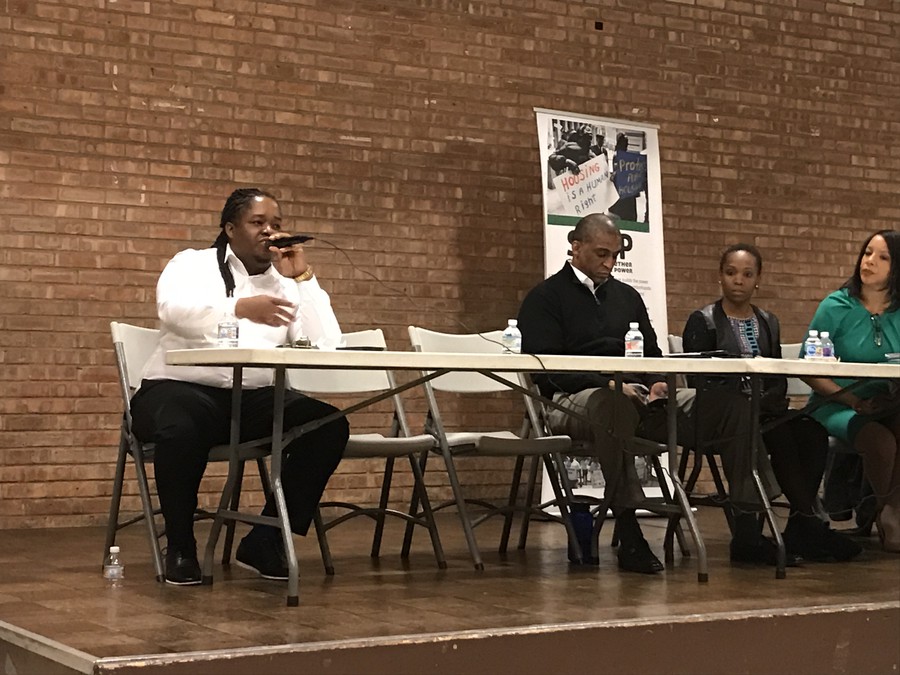 The forum was hosted by the CBA Coalition.

Amid an increasingly heated race for 20th Ward alderman, several candidates gathered last week to debate policies for stemming displacement, particularly as they relate to the forthcoming Obama Presidential Center.

All the candidates present at the forum, hosted by community groups in support of a Community Benefits Agreement (CBA), expressed support for a CBA for the Center, but they diverged on other issues—including a contentious affordable housing policy and strategies for funding mental health facilities.

The meeting was held on the heels of a Chicago Reader article that includes accusations of fraud made by Anthony Driver, an aldermanic candidate and former employee at the Chicago Mayor’s Office of Public Engagement, about fellow candidate Kevin Bailey.

Bailey was not present at the forum and so was unable to address the comments. However, he had a representative outside of the auditorium who talked to some community members.

Early on, the candidates discussed ways that they would ensure that the Obama Foundation and other developers adhere to local and minority hiring pledges. The foundation has promised to hire 50 percent of their workforce from the local area and 35 percent from minority-owned businesses, but community members remain skeptical that they will make good on that promise—a major reason activists have demanded a binding agreement.

Driver said that he would push for a CBA ordinance to ensure that the Obama Foundation has no choice but to follow the terms that it has agreed to.

Driver detailed a plan to start a Federal Credit Union specific to the 20th Ward, and reiterated the necessity of local commerce, saying, “When we begin to fund ourselves and keep money within the community, developers will begin to follow the CBA.”

Pastor and entrepreneur Dernard Newell expressed agreement to this, saying, “If you don’t get [something] in writing, you usually don’t get it at all.”

Meanwhile, former Chicago Public Schools teacher Nicole Johnson said that she would collaborate with the Woodlawn and Englewood Chambers of Commerce to compile a “census” of local businesses to give developers more information about which local companies they would be able to outsource to. However, she also said that she would not attempt to withhold permits from developers that fail to come to binding agreements about community hiring.

On the other hand, Maya Hodari, a project manager for the Chicago Housing Authority (CHA), said that she would attempt to have permits withheld in order to achieve a hard agreement.

“Developers will make a lot of promises to get a permit,” she said. “I say we hold the OPC to the promise they have expressed.” This statement expressed by Hodari is in tension to her stance on the CBA back in early November.

At a forum in early November, Hodari and Bailey both said that they were not yet willing to commit to a CBA ordinance without first reading what it entails.

The discussion also touched on affordable housing policies. Activist Tara Madison asked the candidates whether they would support ordinances like Homes for All and Development for All, which prohibit developers from paying a fee, in lieu of building a certain number of affordable housing units on site.

The City’s Affordable Requirements Ordinance (ARO) requires residential projects using city land to allocate at least 10 percent of units to low- or middle-income housing. However, developers are also able to pay a $100,000 “fee-in-lieu” per required unit to dip below this requirement. That money, in turn, goes to financing other housing expenses throughout the city, including off-site affordable housing and housing choice vouchers. This has caused the ARO to become contentious, as this “fee-in-lieu” option can leave communities without a sufficient amount of affordable housing, causing residents to be displaced.

The Homes for All Ordinance also requires one-to-one replacement for all demolished public housing.

Five of the candidates expressed support of the Homes for All ordinance, and several pitched additional ideas to bolster the two ordinances.

Johnson said that she is in favor of expanding the one-to-one replacement to homes lost to eminent domain, such as when Norfolk Southern engaged in compulsory purchases of privately owned land in order to expand their rail yard in Englewood. Johnson also proposed a community land trust, which is a non-profit organization that acquires public land to be developed by local residents, rather than by large businesses.

Meanwhile, Driver suggested increased rent control, and as part of his aldermanic office he would employ a “housing advocate,” whose job would be to report to residents on housing-relating developments and gather community feedback. Driver mentioned this proposal at the previous week’s forum as well, and also mentioned that the housing advocate would help to connect residents to legal resources.

However, Hodari, a director of development for the CHA, said that she would first gauge the opinions of CHA residents before leaning one way or the other on the two ordinances, as some have found the services funded by in-lieu fees to be beneficial.

“Many families have used a housing choice voucher,” she said.

The candidates also addressed a question from activist Marilyn Harper about whether they supported reopening and fully funding the mental health facilities that have been closed in recent years. All six said they would.

“As a police officer, I have seen that we have a mental health concern here,” said Jennifer Maddox, who worked in the Chicago Police Department for 22 years. “I don’t want people with mental health issues to be caught up in the system.”

However, there was some disagreement among the candidates about how to fund these facilities. Johnson proposed a small property tax increase, by way of a referendum, to fund the expansion of mental health services.

Similar policies have already been enacted in other parts of the city. Last November, residents of Logan Square, Avondale, and Hermosa voted on the Expanded Mental Health Services referendum, which funded the construction of a new mental health clinic through a 0.025 percent property tax increase. That referendum passed with an overwhelming 86 percent majority.

Hodari expressed opposition to the tax hike and instead suggested lobbying the city and state for mental health funding. “I don’t support adding additional tax burdens on working families to achieve that goal,” she said.

Nine candidates met to discuss their economic plans for the future of the 20th Ward.