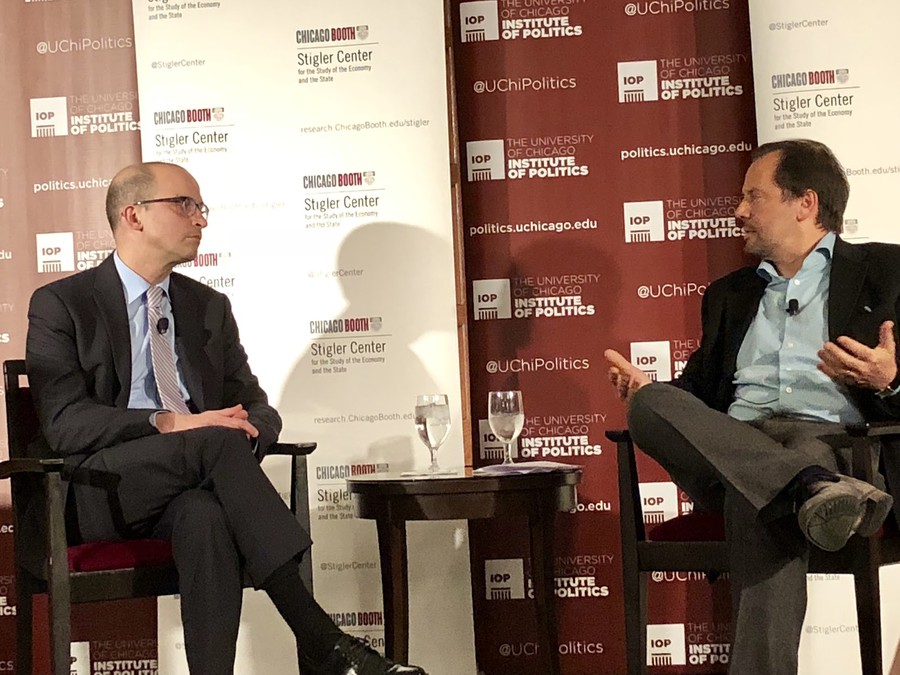 David Leonhardt, an op-ed columnist at The New York Times and 2011 Pulitzer Prize winner for commentary, spoke at the Institute of Politics on Thursday evening about populism in America.

The event was moderated by Luigi Zingales, a professor at the Booth School of Business and director of the Stigler Center for the Study of the Economy and the State.

Zingales began the conversation by asking Leonhardt to define populism, noting that the term “is very often used…almost as an insult and in your articles you [Leonhardt] are much more moderate,” referencing Leonhardt’s repeated calls for a shift to more populist liberal politics.

Leonhardt alluded to a long but somewhat unappreciated history of populism in America, citing examples ranging from Lincoln’s vision of “government of the people, by the people, for the people” and Franklin Delano Roosevelt’s opposition to the titans of industry to Barack Obama’s 2012 election campaign, specifically his speech in Osawatomie, Kansas.

Leonhardt called Zingales’s assessment “a fantastic critique of where the Democratic Party has fallen short on these issues over the last generation.” He noted that despite the preservation of the Affordable Care Act and Democrats regaining a majority in Congress—which he termed “two enormous victories in the Trump era” that “were not by any means preordained”—“right now we’re seeing how weak the resistance is.”

Zingales chimed in to register his shock at Americans’ passivity in the face of the current government shutdown, which is the longest one on record, citing the Gilets Jaunes movement in France. He said, “In Paris, they are in the streets every weekend for much less. If they stopped paying the federal workers in France, people would be having a new revolution with the guillotine. Here, people cannot pay the mortgage and they don’t go down the street?”

Leonhardt agreed and called it “a reflection of both of America’s relatively conservative history…and also the relatively weak state of the organized progressive movement.” This dynamic, he said, “is also the reason why we have so much of the pre-market income shift upward in this country.”

Leonhardt argued that the Democrats would need a fundamental shift in the way they campaign in order to defeat Trump in 2020. Citing polling data and statewide referendums, Leonhardt posited, “Most Americans, in fact…are economically left and socially conservative.”

As a result, “one of the challenges for the Democratic party in this campaign will be how much it can emphasize those issues on which its base, and swing voters, and even some Republicans are on the same page versus how much it emphasizes issues that are in fact highly divisive,” said Leonhardt.

“I think this is a country that is entirely open to a series of policies that are meant to push back against this stagnation in living conditions,” Leonhardt said.

When asked about the role of young Americans in the populist movement, he said that he takes “a lot of optimism in people under 30 in America” as “an enormously diverse and strikingly open-minded generation.” However, when it comes to college campuses, who “have changed less than they like to think” and face a lack of economic diversity, he hopes “we see some student activism to change that.”