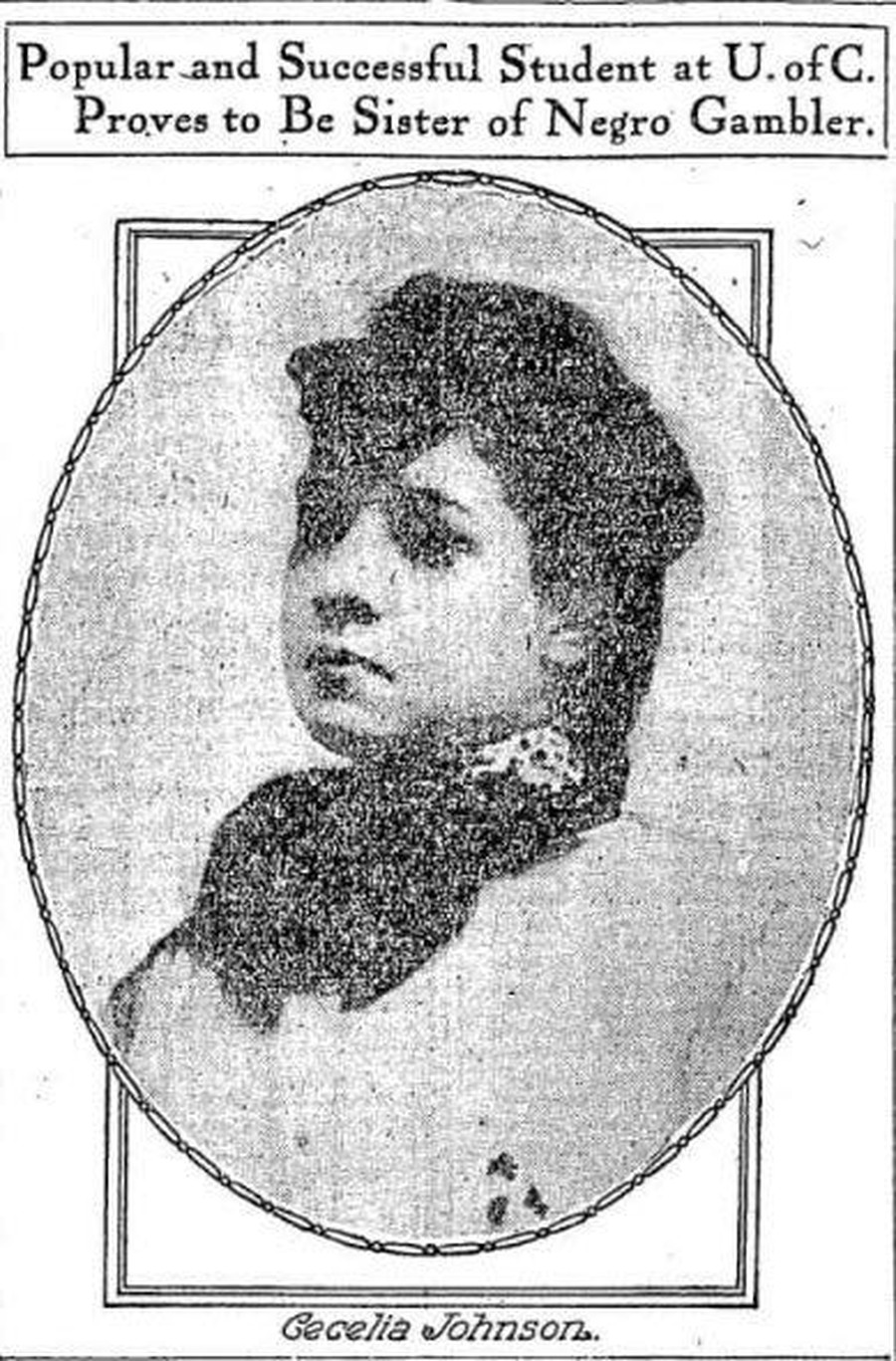 Cecilia Johnson, as depicted in a June 1907 issue of the Chicago Tribune.

The University of Chicago was one of the first American universities to accept students of all races. However, while Black students were always able to enroll in the University, they did not always receive equal treatment in housing and residential life.

By 1943, at least 45 Black students had earned Ph.D. degrees from the University—more than any other university in the country. Between 1896 and 1911, 12 Black students attended the school as undergraduates, including Georgiana Simpson (A.B. 1911, Ph.D. 1921), who was memorialized in 2017 with a bust in Reynolds Club. Other Black undergraduates during this period included Richard Robert Wright, Jr. (A.B. 1901) and Cecilia Johnson (A.B. 1906).

These three students’ individual experiences with the housing system shed light on the complex history of an institution that was in some ways inclusive but often deeply biased.

Richard Robert Wright, Jr., who received a Bachelor of Arts in Divinity in 1901 and a Master’s in Biblical Languages in 1904, gives an account of his life as a Black student in the dormitories in his autobiography, 87 Years Behind the Black Curtain.

A resident in the former North Divinity Hall, Wright describes his surprise at having a “white man make my bed, call me ‘Mr.’ and tell me to call him by his first name, abbreviated at that,” referring to a custodian named Dan whom he quickly befriended.

He describes his experience at the University as mostly devoid of “outright” racism save for an initial encounter at his dorm, but allows that he “didn’t spend that much time doing [extracurricular] activities.”

“I had written from Savannah for a room and sent the money, secured the assignment, and moved in as soon as I arrived on the campus” he writes of that initial encounter. “But another student had occupied the room and had taken for granted that he would have it for the summer quarter. When he returned and found me in the room, he protested to Dan. But Dan had already begun to like me, and told me before I saw the man, ‘stand up for your rights. It’s your room.’”

Wright describes the student as trying to have the registrar “dispossess” him, to no avail; “he called some students to protest that a Negro was in the dormitory…. He got a little encouragement…. Dan advised me to see the business office which I did; there the matter ended.”

Wright also describes discovering from a Divinity School directory that another student from his hometown of Augusta was attending the University, and an encounter in which the student—whom he leaves unnamed—pretends to have never been to Augusta.

He describes a friend as saying to him, “he’s from Augusta all right, and from Ms. Laney’s school, but he is passing for white now…the next week he left and I never saw or heard of him since, except that he was married to a white woman, had two children, and had been a pastor of a white Baptist Church.”

Although Wright describes his experiences at the school as mostly positive, he allows for the way that his time in Germany shifted his perspective in hindsight. “Studying [abroad] was ‘epoch-making’ in my life…. I never knew that I [had] walked about a foot behind my white companions, all unconsciously. Germany cured that and I learned to walk abreast.”

Cecilia Johnson and the Color Line

“COLOR LINE RENDS U OF C SORORITY,” reads an article published in a July 1907 edition of the Chicago Tribune. “Cecilia Johnson, Star Student & Popular, Proves to Be the Sister of Negro Gambler.”

The Tribune article, published on the tip of a fellow student who worked as a correspondent for the paper, accused then-graduate student Cecilia Johnson of trying to pass as a white student in order to join a sorority.

The caustic Tribune article describes Johnson, a member of Pi Delta Phi, as “received into a secret society, made a belle at the proms and dances…[and] found to be a mulatto.”

Media coverage that followed in the Tribune, the Chicago Inter-Ocean, and other publications, however, featured interviews from Johnson’s classmates that challenged the notion that Johnson ever tried to “pass.”

“Miss Johnson’s friends in the University of Chicago were not ignorant she was of [African-American] blood,” stated a later Tribune article. “She made no attempt to conceal this fact. She is loyal to her race and to her kin. She went into university life with only her own character, energy, and brains behind her. She made her way unaided by any outside influences. Her friends are proud… she won the highest honors as a student.”

The Tribune posted a retraction two days after their initial article formally apologizing to Johnson, offering “a public apology to Miss Johnson and its readers…[regretting] additionally that this apology makes it necessary to revive even by suggestion further publicity into the young woman’s affairs.”

Although not directly related to her presence in campus housing, Johnson’s integration of the sorority and the scandal that followed caused her to depart campus; she did not return for almost a decade, completing her Master’s in Education in 1920. As Ferdinand L. Darnell, one of her classmates, told the Tribune, “I have known Miss Johnson for a long time and this affair will nearly break her heart.”

Georgiana Simpson was one of the first Black women to earn a doctorate in the United States. Like Johnson, however, her education was disrupted by a controversy over her race.

In campus housing, Simpson was the subject of significant racism, becoming the center of debates about where Black students should be housed in both 1907 and in 1920–21.

As an undergraduate, Simpson chose to live in Green Hall—a women’s dormitory at the time—but her arrival provoked indignation from several white, southern women students who campaigned for her removal, five of whom moved out of the dormitory in protest.

Sophonisba Breckenridge, who was at the time the head of Green Residence Hall and secretary to Marion Talbot, Dean of Women, made the decision to let Simpson stay in the dorms, a move that was overruled by then-President Harry Pratt Judson, who had Simpson find residence off campus. This established the informal policy that Black students could not live on campus, which lasted until the 1920s.

Cecelia Woolley, founder of the Frederick Douglass Woman’s Club—one of the first interracial women’s clubs in Chicago—sent a letter to Judson condemning his action to remove Simpson, writing that, “the case of Miss Simpson…who upon your demand gave up her room there and sought quarters outside the campus, is one which has aroused deep interest and concern in and out of university circles…. We understand that your action in this matter was based upon the consideration of the feelings of southern students. We respectfully submit that nearly every colored young man and woman seeking the benefits of your institution is a ‘southern’ student, whose rights and feelings deserve equal consideration with your white students.”

Through a combination of summer and correspondence courses, Simpson managed to earn her bachelor’s degree in German in 1911, returning later to complete her Ph.D. in Germanic philology.

After Simpson, a Movement Towards Inclusive Housing

Judson’s policy of housing segregation faced considerable pushback from the University community, and did not long outlast his tenure.

Breckenridge and Talbot were among several activist administrators who tried to advance the cause of integration, in housing as well as academically. Judson’s successor, President Ernest DeWitt Burton, was receptive to these efforts; during his administration, which began in 1923, the University formed committees to develop a policy on housing, ultimately deciding to admit Black students into dorms.

Since that decision, students of all races have lived together in the dorms. However, integration is no guarantee against racism. Some students of color say they continue to face microaggressions and marginalization in housing life. The history of residential life at the University—one that includes informal segregation and eventual active integration—provides context for today’s dialogue on race in housing.

The University should aim to have students choose to stay.