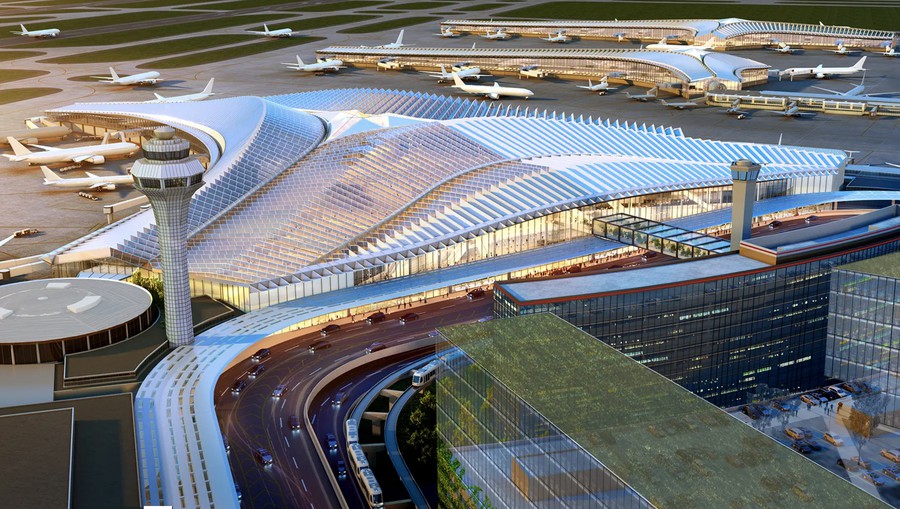 On January 17, the Chicago Department of Aviation (CDA) unveiled the five finalist designs for an $8.5 billion expansion of O’Hare International Airport, which is set to be completed by 2028.

The new international terminal will occupy the space currently occupied by Terminal 2, which was built in 1961 and currently hosts a combination of domestic and international airlines, including United Express, Air Canada, and Delta Airlines.

One of the designs, proposed by Studio ORD, is spearheaded by Jeanne Gang of Studio Gang, the architect who designed Campus North Residential Commons and was recently selected to redesign the University’s center in Paris.

The project will massively expand O’Hare’s current capacity. “We’re going from 4.5 million square feet to 7.2 million square feet in our terminals,” Mayor Rahm Emanuel said during a press conference last week. “If you look at what we’re doing at O’Hare, we added Midway’s capacity to O’Hare.”

The project aims to match the amenities and efficiency found at other hub airports, as O’Hare has a reputation for routine delays and its sprawling size.

One goal of the project is to expedite transfers from domestic flights to international ones. Currently, passengers in Terminals 1 and 3—which service United and American Airlines, respectively—must exit the secure area and use the automated people mover train.

In order to allow the expansion to begin, all current domestic airlines—except for United and American—will move to the current international terminal, Terminal 5, before 2020. Delta will move to Terminal 5. Its SkyTeam international partners, such as KLM, Air France, and Virgin Atlantic, will remain in their current location and not relocate to Terminal 2, in order to be closer to Delta and their other partners.

While the design of the new terminal has yet to be selected, the structure is set. The new terminal will feature a design similar to those used at Denver and Atlanta International Airports, with one main concourse connected to the other terminals via walkways and two island concourses connected by underground people movers.

Team 1, Fentress-EXP-Brook-Garza Joint Venture Partners, is led by the chief designers of the tent-like Denver International Airport. Their proposal features a swooping, multi-layered roof, allowing for an airy, natural atmosphere.

Team 2 is led by Foster + Partners, who designed the all-glass Apple store on Michigan Avenue. In a press release, the firm described the design as “three arches framing the landside of the building, merging into a grand single arch on the airside, thus dissolving the barrier between inside and out and allowing the spectacle of the airfield to be visible to all who pass through the gateway, and recapturing the romance associated with air travel.”

Team 3: Studio ORD is led by Jeanne Gang’s architecture firm Studio Gang, the firm responsible for Campus North. Gang’s design takes inspiration from O’Hare’s original name, Orchard Field, and features an open, vaulted, triangular terminal with vast green spaces, trees, and shrubbery inside. The roof is made of several angled ribs connected by glass, which allows for natural light to flood the interior. The inside of the roof is wood-paneled, allowing for a relaxed atmosphere.

Team 4 is led by Skidmore, Owings & Merrill, who designed the Willis and Trump Towers in Chicago as well as several other high-profile buildings. This team has proposed a large, square terminal with glass walls and a honeycomb-shaped roof to allow for a large, airy waiting space with various types of natural plants and trees.

Team 5 is led by Santiago Calatrava, whose design is by far the most expensive and ambitious of the five proposals. Calatrava, who is known for his distinct, skeletal style, is responsible for the Oculus Transportation Hub at the World Trade Center.  His design reimagines the entire courtyard of the Airport as a combined commercial center, garden, courtyard, and parking garage. His proposed terminal building follows the shape of an arrow pointing to the tarmac, with a striped roof of glass and paneling converging towards the point of the arrow.

Chicago citizens were invited to vote for their favorite designs in an online poll which closed Thursday evening. A commission led by Emanuel will select one of the five designs sometime before the Mayor’s term expires in April, using input from the online poll as well as various alternate, undisclosed sources.