Women Crush Beloit, Fall to Wash U in Holiday Games 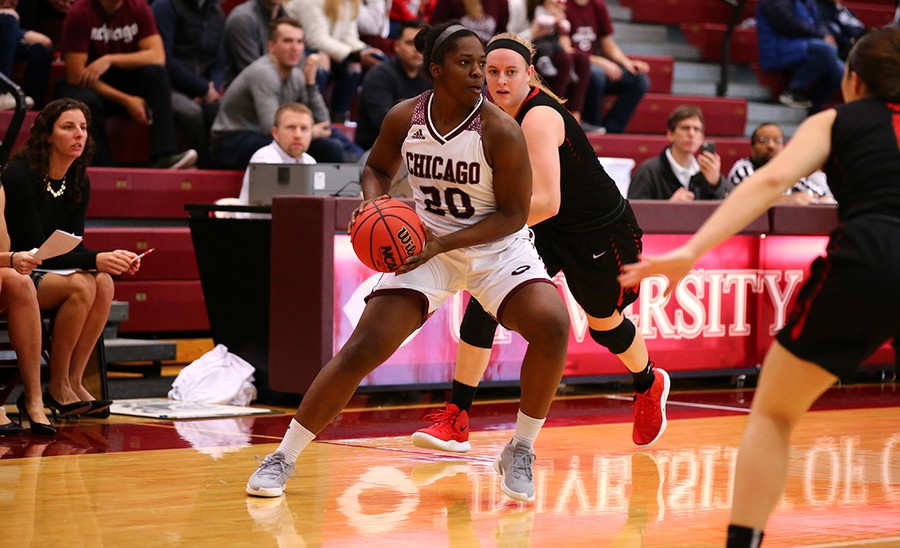 Fourth-year Olariche Obi looks to pass between Wash U opponents.

After an electric start, with their only blemish coming courtesy of No. 2 Thomas More, the Maroons took their 8–1 record on the road to Nashville over the holiday break to compete in the Music City Classic at Trevecca Nazarene University.

In their first test in 11 days, the Maroons squared off against Midwest foe Beloit on Saturday, December 29. Controlling the game from the opening tip, the women pulled away with a stellar second half, outscoring the Buccaneers 74–49 in the final 20 minutes of play.

In a quick turnaround, the South Siders were back on the hardwood on Sunday, December 30 to face Husson University of Bangor, ME. In a defensive struggle, the Eagles held off a late-game push from Chicago, handing the No. 8 Maroons their second loss of the season by a score of 64–59.

Mia Farrell continued her production, pouring in 18 points in the loss. Fourth-year Jamie Kockenmeister added 13 points and seven rebounds, six of which came on the offensive glass. Anchored by nine steals and eight blocked shots, the Maroon defense forced 16 turnovers in the contest.

Returning to Ratner to ring in the New Year, the South Siders were back in action on Saturday, January 5, to open UAA play against rival Wash U. Dropping consecutive games for the first time in two seasons, the Maroons were outmatched by the visiting Bears, falling in convincing fashion, 85–66.

After establishing a commanding 28–15 lead at the end of the first, the Bears weathered the counterpunches from Chicago in the second quarter. The lead proved to be insurmountable as Wash U won a hard-fought second half, handing the Maroons their first UAA loss in two seasons. Obi led the way for a stagnant Chicago offense, finishing with 17 points and eight rebounds. First-year Klaire Steffens added nine points and seven boards of her own.

“The loss over break was a tough one, but I think it really exposed some issues that we’ve been able to talk about and work on in practice, [among those being better shot selection and bringing more energy in the first half],” Kockenmeister said after returning to campus. Despite the disappointing start, Kockenmeister was excited to get back on the court in conference action. “UAA should be fun this year because every team is talented and should make the conference very competitive. Hopefully we’ll start picking up like we did last year and have some statement wins under our belt in the coming weeks.”

The South Siders (9–3, 0–1 UAA) will kick-off a busy weekend Friday night, hosting the Rochester YellowJackets (6–6, 0–1 UAA) at Ratner Athletics Center before welcoming first-place Emory (10–2, 1–0 UAA) on Sunday. With little room left for forgiveness, the weekend’s conference matchups are pivotal for the Maroons. Friday’s tip-off is scheduled for 6 p.m.