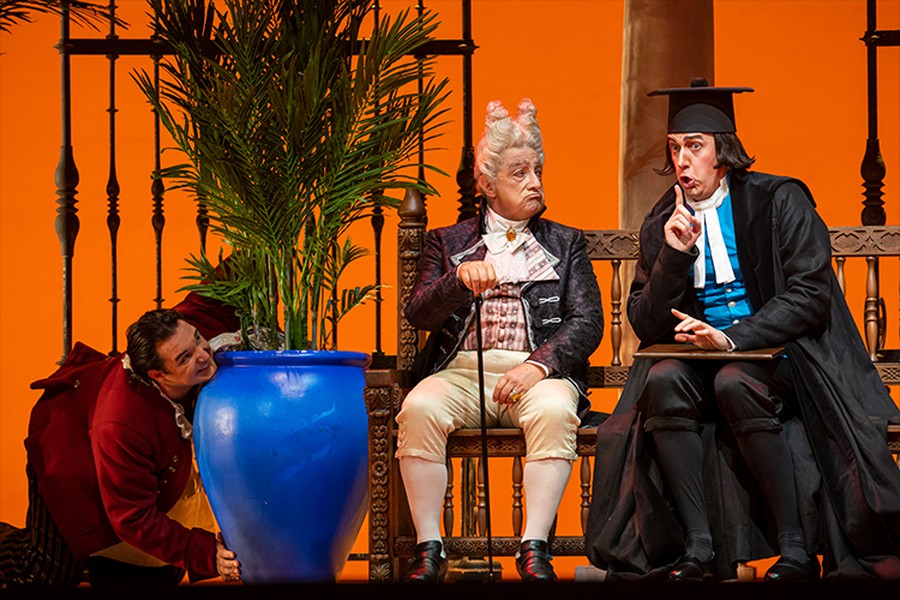 Although Bartolo describes opera as “long-winded and depressing” in Gioachino Rossini’s The Barber of Seville, Lyric Opera’s Saturday night performance was nothing of the sort. To the contrary, it was hilarious and masterfully performed. The impressive cast, led by the renowned mezzo-soprano Marianne Crebassa and the inimitable bass-baritone Adam Plachetka and baritone Alessandro Corbelli, ensured that the Lyric’s 65th season started on a high note.

With a season including the far more somber operas of Wagner’s Der Ring des Nibelungen, Tchaikovsky’s The Queen of Spades, Puccini’s Madama Butterfly, and Heggie’s Dead Man Walking, Rossini’s hysterical and lively score gave the season a needed comical beginning before it takes a darker turn this winter.

Sir Andrew Davis, in his penultimate year as music director of the Lyric Opera, began the night in masterful fashion. Although the strings—the violins in particular—took a few minutes to get fully warmed up during the overture, the brass’s performance and Sir Andrew’s control over the orchestra made any shortcomings practically inaudible. The orchestra ensured that every one of Rossini’s tempestuous scales and rapid turns was present and engaging.

Lawrence Brownlee, a Rossini expert, did an outstanding job playing the hilarious and haplessly-in-love Count Almaviva. His incredibly expressive yet agile voice was matched only by his comedic timing; using his diminutive stature to his advantage, he was a perfect partner-in-crime for Adam Plachetka’s Figaro. That being said, at times Brownlee’s voice could have been slightly more forceful on stage as it had a tendency to be overshadowed by the baritones and chorus.

Czech bass-baritone Adam Plachetka had no such problem in the title role. His rafter-rattling voice, though not particularly Italianate, navigated Rossini’s scales and comedy with incredible precision, and his swagger on stage made him the absolute center of attention throughout the performance. Whether he was (failing to) hide behind a small tree or commanding the stage during a very agile “Largo al factotum,” Plachetka was a treasure on the stage throughout the opera.

The stage was also graced with one of the greatest modern interpreters of Rossini’s classic buffoons: Alessandro Corbelli. The Italian baritone possesses both a great sense of humor and an expressive voice that fit the character of Doctor Bartolo perfectly. Bartolo is a surprisingly demanding role—the voice is lower than Falstaff or Rigoletto, but it demands incredible precision with its constant patter (a very rapid form of singing with one short note per syllable and tongue-twister phrases). This did not hinder the Rossini expert, however.

There were also two young surprises on stage. The 28-year old Polish bass Krzysztof Bączyk had an incredible Lyric debut as Basilio, the music teacher and confidant of Bartolo. His booming voice in “La calunnia è un venticello,” an aria extolling the merits of slander, earned him a rousing ovation from the audience. Ryan Opera Center first-year Mathilda Edge also made a stunning Lyric debut as Rosina’s governess Berta, winning applause for her rendition of “Il vecchiotto cerca moglie.”

Among such an outstanding cast, the most impressive voice on stage Saturday evening was without a doubt that of Marianne Crebassa’s Rosina. Crebassa, a world-renowned French Mezzo-Soprano who will have her Met debut as Cherubino in Mozart’s Le Nozze de Figaro this February, possesses what can only be called one of the most stunning instruments of the contemporary era. Though a mezzo, her voice, crystalline in its clarity and beauty, possesses a levity that allows her to effortlessly propel herself up Rossini’s difficult phrases. Her Act I aria, “Una voce poco fa,” left the audience awestruck at the musician whom I am certain will become one of the leading mezzo-sopranos of our era.

While each individual was a standout in their own right, what was truly impressive about this cast was how well they worked together. There was no weak link between them, and they brought the absurdity of Rossini’s opera to life in a way that only increases its hilarity rather than make it seem unbelievable. The quality of the acting in this cast was unparalleled—Plachetka, Corbelli, and Brownlee are all gifted actors, boosting the quality of their musical performances. Crebassa, however, was in a league of her own when it came to expressiveness; her facial expressions were comparable to those of Maria Callas and made her a sight to behold.

That being said, while the singers and orchestra were of excellent quality, the same could not be said for the direction. Though the set itself was superb, the blocking seemed at times contrived—even by operatic standards—and a particular scene change between scenes 1 and 2 of Act I, during which the entire set was swapped out on a turntable while Figaro and Almaviva were still singing, was unfortunately distracting. While this was by no means as bad as the bizarre nightmare that was last year’s Ariodante re-imagination, it left much to be desired.

The singers made up for any small shortcomings in the set with their own prestige, commanding every ounce of attention on stage. With only four performances left in its run (through October 27), this is a must see.