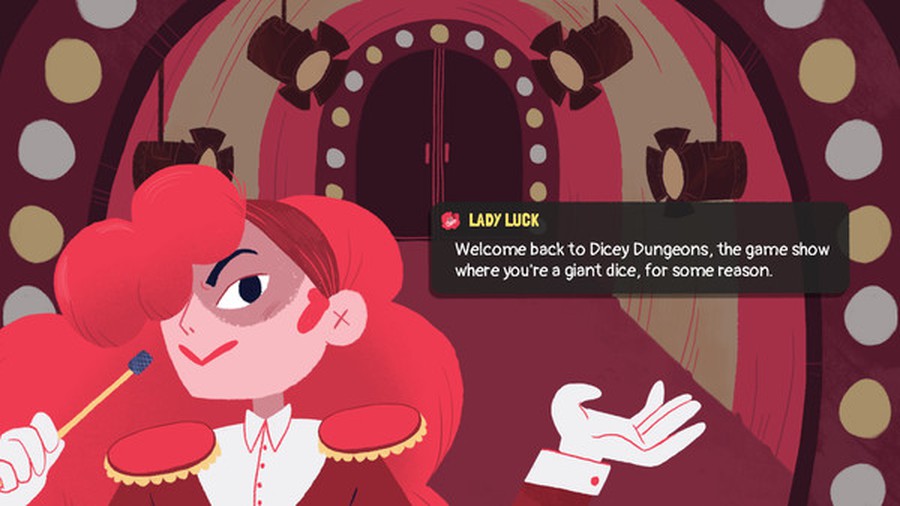 Dicey Dungeons presents a bizarre premise but is highly rewarding if you are willing to stick through the challenge.

Since the release of Spelunky more than a decade ago, there’s been no shortage of roguelike games—turn-based, role-playing games involving dungeon-crawling through procedurally-generated levels—on the market. With greats like The Binding of Isaac and FTL: Faster than Light, we are experiencing something of a halcyon era of difficult, procedurally generated permadeath (meaning that a character’s death is permanent) games, more or less similar to the original Rogue. In a time when cookie-cutter roguelikes are a dime a dozen, fans of the genre need not fear that Terry Cavanagh’s Dicey Dungeons is anything but an interesting and inventive new entry.

Released on August 13, Dicey Dungeons is a dice-based roguelike where one plays as one of six contestants who have been turned into giant dice to compete for their heart’s desire on antagonist Lady Luck’s titular game show. Players may be familiar with the punishing difficulty of previous games developed by Cavanagh, such as VVVVVV and Super Hexagon. Although Dicey Dungeons is also quite difficult at times, Cavanagh appears to have toned it down just a little bit. Additionally, Northern Irish musician Chipzel reprises her role as the composer from Super Hexagon. While this new game is very mechanically different from those titles, anyone who enjoyed their style, creativity, and challenge will find a lot to enjoy here as well.

The primary mechanic of interest in Dicey Dungeons is the central role of dice in its combat system. On their turn in combat, players roll a certain number of dice based on their level before using those dice to activate pieces of equipment. This equipment’s effects range from simply dealing the printed value on the dice to spending a die to render all enemy rolls of the same value useless. Some effects only work with even or odd dice, while others require a specific number to activate a powerful effect. And some equipment is used to support other pieces, such as a charm that requires a total roll of 10 but gives two sixes in return or a spatula that lets you flip a die to the opposite face.

While the amount of equipment gives players a lot of choices in how they approach the dungeons, the individual characters and their dice-rolling strategies provide the most variety. Each character plays through six “episodes” of Lady Luck’s game show completely unlike the others, and all bring a mechanically different and interesting way to arrange a narrative structure on a roguelike. For instance, while the Warrior focuses on rolling high numbers, the Thief focuses on rolling a large number of low-value dice. While both of these characters focus on finding a set of equipment that synergizes well, another character, the Inventor, cannot do that because she has to scrap a piece of equipment for a new ability at the end of every fight. It should be noted that these are the most normal characters offered in the game; the other three are left as a surprise to the reader.

Suffice it to say, the game’s dice-based system is complex, varied, and fun, but some of the stylistic touches also make Dicey Dungeons such a delight. Chipzel’s chiptune soundtrack is amazing, and the rocking battle tracks are great background music for long turns spent pondering one’s next move. The game show theme is fairly unusual for a roguelike, and the sounds, visuals, and writing sell the atmosphere. Some words should be spent to address just how good the character writing in this game is. All the contestants have their own introductory cutscenes, and each one just oozes character. These cutscenes also give a wonderful stage for the game’s antagonist, Lady Luck, and her sidekick, the Jester. While all this is nice and well done, what is really special is that in any given run of Dicey Dungeons, the player will only encounter each enemy once at most because each enemy is a past contestant on the show, and is totally and captivatingly unique. The plotline slowly unfolds across the game, with tidbits appearing every time the player beats an enemy or when an achievement is unlocked. These choices, along with a host of other smaller details, go a long way toward making the world of Dicey Dungeons lively and holistic.

Dicey Dungeons is a well-polished and innovative roguelike with a lot to offer. For students of roguelike design or storytelling in video games, there’s certainly something to learn from this release, but anyone can enjoy the style and challenge of this game. It’s not easy: The mechanical systems can take a while to get a handle on, and some of the levels are brutally hard. However, after overcoming those challenges, players will find a game with buckets of character and some surprisingly intense strategy, despite all the dice rolls.