By Alina Kim   and Jad Dahshan 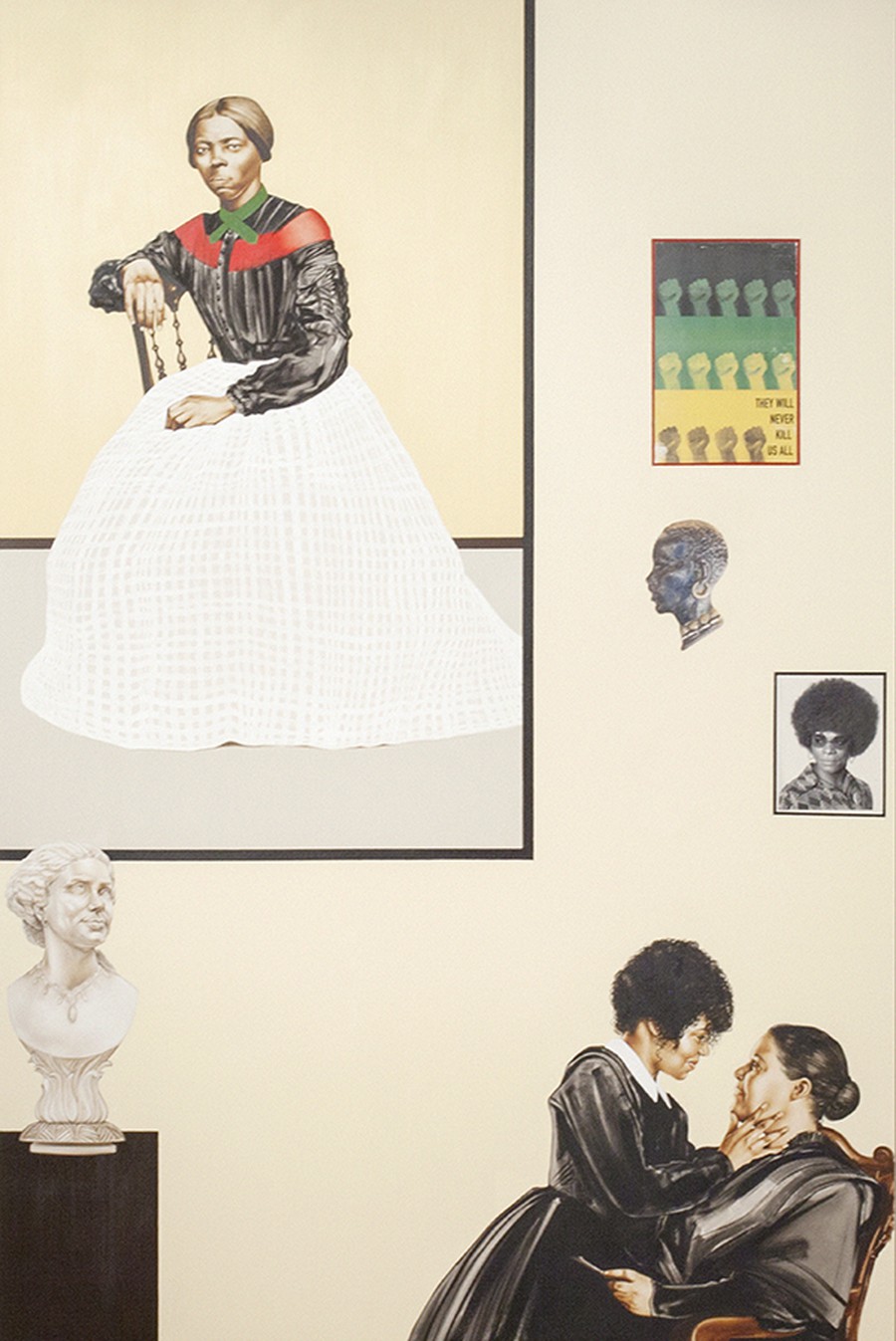 On October 19, the Smart Museum opened its doors to welcome visitors to Meleko Mokgosi: Bread, Butter, and Power. A traveling show initiated at the Fowler Museum at UCLA, the exhibition was inaugurated with an artist’s talk followed by a panel discussion on the civic role of writers, concurrent with Humanities Day 2019. Bread, Butter, and Power is the latest chapter in the Botswanan artist’s series Democratic Intuition, an eight-chapter project instigated in 2013. The exhibition questions ways labor practices and divisions are gendered in southern Africa, as well as how democracy is conceptualized and executed.

Mokgosi was in discussion with Erica P. Jones, associate curator of African arts at the Fowler, and their conversation was moderated by Jennifer Carty, associate curator of modern and contemporary art at the Smart, who oversaw the project’s transfer to Chicago. The artist began the discussion by explaining that the direction of the show had evolved quickly from a comparative examination of intellectual and physical forms of labor to the multifarious concept of democracy. Recounting the exhibition’s origins, Mokgosi pondered aloud, “How do we reciprocate and practice the idea of democracy?”

Entering a wide, cavernous room which contrasts the narrow windings of the neighboring Samson Young exhibition, visitors are presented with a panoramic array of panel paintings by Mokgosi that cinematically stretch across the Smart’s white walls. Almost like unfurling a roll of film, viewers walking along the edges of the space transition from one scene to the next, shifting between interior and exterior settings, meeting new characters, and traveling through time. “I try to think of everything in relation to the cinematic,” explained Mokgosi, drawing analogies to closeups, long shots, and cinematic frames in describing his episodic painting series.

Besides their filmic quality, the works on display also emulate and respond to traditions of genre painting and history painting, two fields in art history canonically concerned with everyday scenes, biblical allegories, and historical narratives of a white, male, straight audience. Mokgosi subverts the colonial European tradition by taking postcolonial southern Africa as his subject matter. In two pieces in particular, allegories are written in Setswana, the main language in Botswana. To non-native speakers, the inaccessibility of meaning within these canvases encourages a fricative discomfort, and in doing so exposes a subconscious, colonial bias for European languages. The pieces advance Mokgosi’s argument that non-Western languages should be equally privileged as those of the West. “All languages should matter,” said Mokgosi at the talk.

The artist also spoke to the culturally specific ways that values and norms are created in society, describing how different feminisms might clash. The conversation was in reference to one of the paintings on display, in which a woman holding a bowl is seated on the floor, while a man nearby enjoys the elevation of a chair. Mokgosi speculated that a Western feminist might see an oppressive hierarchy in the arrangement, and analogously in any similar non-Western social dynamic, whereas within the local context, this would not have been the case. The idea of “the sub-determination of women,” explained Mokgosi, preceded even the term feminism. 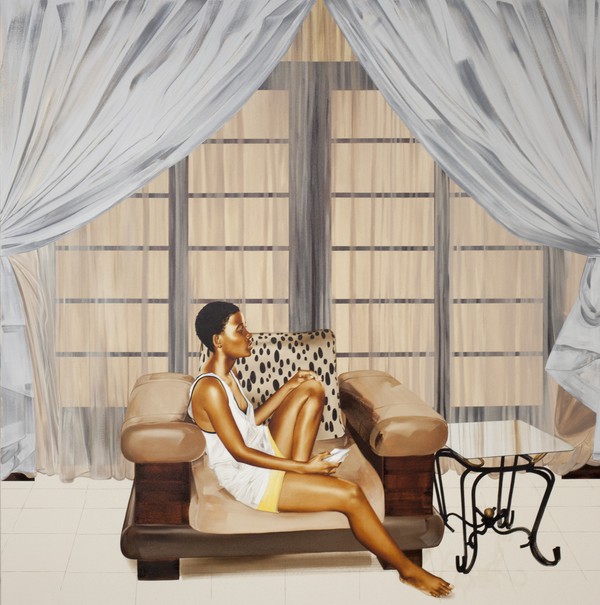 Bread, Butter, and Power questions the narrow perspective of a Western feminist lens and investigates how democracy influences our worldviews and relationships.

He then switched to a brief talk on the reconciliation of freedom and interference within a democratic society, and the faint line of mutual recognition that borders the two. He projects the question of whether there is a limitation to what the artist can relate to and understand, even within his own works. Mokgosi sees this as a way to empathize with others and to further delve into how this affects how he envisions equality and democracy. Continuing his discussion on the image of “Woman,” he explained that he began the formation of Democratic Intuition by wondering about the description of “things” and social “conceptions” in specific ways. The stereotypical understanding of the “Woman” particularly intrigued him, and he chose to depict a pairing of opposition and unity between our conceptions of feminism and masculinity. Ultimately, his solution for social progress comes from the breakdown of masculinity and the alliances between classes and genders.

In conjunction with his call for this alliance, he pointed to a life-size tube in the back of the exhibit, which pictured a decorated Black man, who holds a trophy and gold medal with no engraving. The expression on the man’s face is one of disappointment and regret. Is masculinity unrewarding in the end, Mokgosi challenges, with flaunting decorations but no real recognition? His conclusion on the topic brushed on the embracing of “professional alliances” within social groups and the “castration” of the male subject—though of what sort is still in the air.

The artist ended his conversation with a discussion of understanding of identity and the self. “It’s not about superiority,” he declared, “but about self-determination.” Admitting that we cannot erase the past—we cannot undo slavery, the pillaging and lynching, the Middle Passage, and the plantations—the least, and technically the most, we can do is advocate and actively initiate the correction of historical forces and instead find freedom through how we as people think of each other and understand our individual experiences—the bread and butter that feed an evolving democratic community.

In conjunction with Humanities Day, a day-long series of presentations, lectures, and tours organized by the Division of the Humanities, the Smart hosted the panel Writer and Citizen in the galleries where Bread, Butter, and Power is current on view. Framed by Mokgosi’s paintings, the four participants discussed their most recent projects within a dialogue centered on questions of the social function and impact of writers as citizens within areas such as environmental crisis and xenophobia.

Jennifer Scappettone, associate professor in the Departments of English Language and Literature and Romance Languages and Literatures, launched the panel. A poet and scholar, Scappettone works across translation, research-based nonfiction, and augmented reality (AR) to expose our entanglement in the networks of labor and waste production that underlie our telecommunication systems. Scappettone wrapped up her segment with a quick AR demonstration which made it appear as though pennies were raining from the ceiling.

Next was Stephanie Soileau, assistant professor of practice in the arts in the Department of English Language and Literature. Soileau addressed Louisiana’s disastrous and rapid loss of land, citing natural reasons for the delta drowning, such as wave erosion and hurricanes, but also noting the accelerating effects of the oil industry. “It’s a devil’s bargain,” she explained, since locals rely on the source of their land’s destruction for their livelihoods.

Assistant Professor in the Department of English Language Edgar Garcia continued the conversation by sharing his work that examines the unexpected interstices between statistical risk assessment, divination, and the way we conceptualize immigration. Thinking about the ways statistics tend to dehumanize people, particularly migrants, Garcia posed the question “How does the figuration of risk engender certain values about people?”

Finally, Lina Ferreira Cabeza-Vanegas, assistant professor in the Department of English Language and Literature, related an experience she had three years ago, when Trump infamously coined the term “shit-hole countries.” Ferreira conveyed the helpless rage and desperation that statement spread through her and her community, and commenced to read some poetry she translated in response to the political climate.

In Bread, Butter, and Power, Meleko Mokgosi adapts a historically exclusionary European genre painting tradition for a postcolonial, southern African context. His paintings undulate between interiors and exteriors of the Botswanan everyday, depicting various divisions of labor and highlighting the ways in which they are gendered. His stylistic allusions to Western artistic practices highlight the culturally specific dichotomies between Western feminist values and those of his hometown, where power dynamics may be misinterpreted by European and American feminists. Paintings range in their contents from women in sundry acts of labor, such as grooming and food preparation, to men suggesting new modes of masculinity. Incorporating a group of panelists who extended Mokgosi’s conversations about citizenship into the areas of environmentalism and indigenous studies, the Smart Museum’s latest opening day proved once again to be a thought-provoking and reflective success.