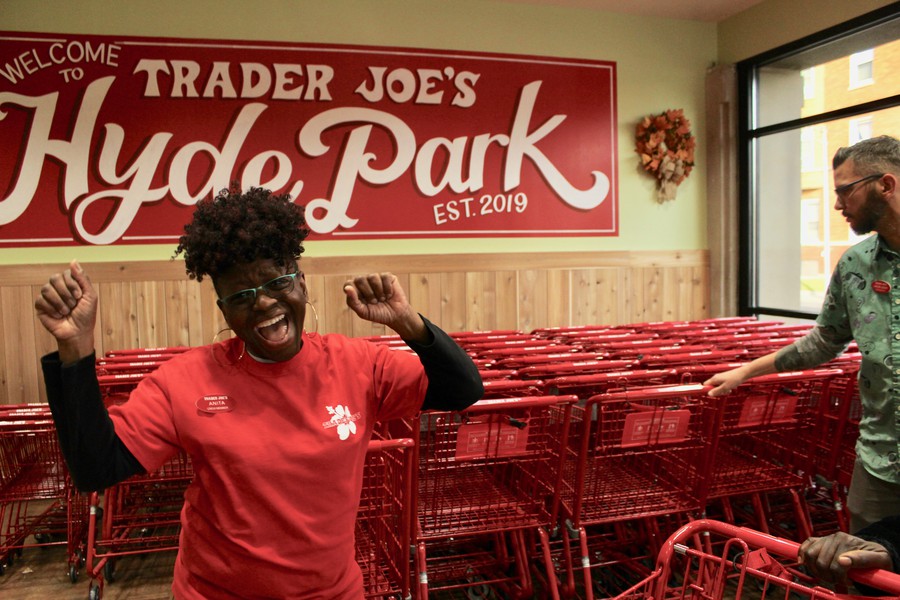 The store is the first Trader Joe’s to open on the South Side of Chicago. In May, the University  announced that Trader Joe’s would replace previous tenant Treasure Island, a grocery that shuttered last October.

At Friday’s opening, a sign at the front of store proclaimed, “Welcome to your neighborhood grocery store!”

“We have been waiting for a grocery store for about a year now,” Chanel Lane, a Hyde Park resident, told The Maroon after shopping with her two young children, Roen and Amory.

She said she’s been in the neighborhood for three years, and that compared to Treasure Island, Trader Joe’s is “a bit smaller” but that she “really like[s] the quality” of their products. Trader Joe’s is not taking up the entire space, which will be shared with as-of-yet unannounced tenants.

Some people came from even further away. Marlene, who declined to give her last name, said she lives by the border between Illinois and Indiana. “I heard they opened today…. [I decided,] let me go over there and support them,” she said.

While the store was crowded, Marlene praised its staff for being “very polite” and helpful.

Before the store opened at 9 a.m., a line of community members, UChicago students, and other shoppers stretched down the block.

Fourth-year Veronica Myers tweeted that she arrived an hour before opening, but she had actually arrived two hours before the doors opened.

did i show up an hour early for this trader joe’s opening? yes. am i here before any of the trader joe’s employees? yes. do i regret waking up this early? absolutely. #doitforjoe

In a follow up Twitter message, Myers said she came to the store at 7 a.m., thinking the store opened at 8 a.m, and was third in line when she joined the line half an hour later after getting coffee.

“There was a really refreshing sort of camaraderie about the whole thing,” she said. “We talked about school, the weather, other grocery stores that are in talks of development…. My line-mates were definitely seasoned vets and shared some tips with me from their experience with grand openings.”

When she finally entered after 9 a.m., “it was really eerie and kind of beautiful for those few seconds I was wandering around the aisles alone, until everyone else flooded in,” she said.

As the store opened, Trader Joe’s employees and managers handed the first customer in line a pair of giant scissors to cut the red ribbon at the store’s entrance, while a Kenwood Academy student marching band serenaded the crowd. A jazz band set up shop in front of the store and played for customers throughout the day.

Aaron McEvers, a Bronzeville resident and saxophone player, told The Maroon that his wife works in the Trader Joe’s in South Loop, which before today was the closest store location to the South Side. She heard that the Hyde Park store was looking for a band to play at the opening, so he and some colleagues came together for it.

“The response we got from people was really good—[they] appreciated it even more than in clubs,” McEvers said. Keyboard player Paul Mutzabaugh added that he was looking forward to perusing Trader Joe’s “wide assortment of spirits.”

While the store is smaller than Treasure Island, it still has produce and meat sections and a moderately large wine selection, in addition to general grocery products. The meat section includes Kosher-certified poultry.

Fourth-year Sam Joyce, who had advocated for the University to bring Trader Joe’s to Hyde Park, said by Facebook Message, “What impressed me was the walk over [to the store]—so much easier than going up to Roosevelt.”

He felt the food selection was about the same, but “this one feels more spacious than Roosevelt… maybe the aisles are a little wider.”

The Hyde Park community gathers for the 9 a.m. opening of Trader Joe's last Friday, with a line stretching down the block and a marching band to celebrate the occasion.