"Luisa Miller" is a Pleasant Surprise 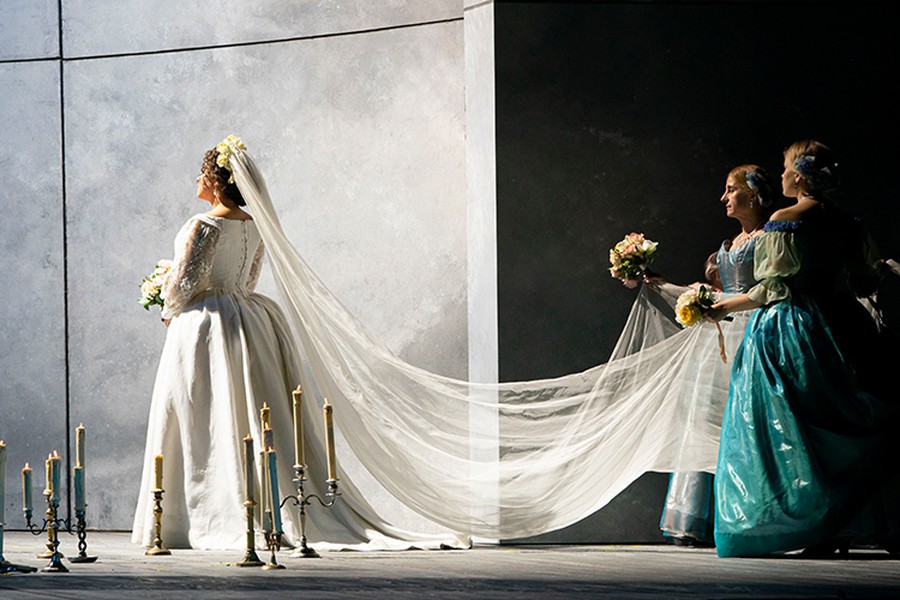 The Lyric Opera’s first production of Verdi’s Luisa Miller in over three decades was truly a memorable occasion. Having a standby singer in a performance, while uncommon, is not rare. But, having two standbys—and two standbys who outshine the stars they replace—is quite rare indeed. Soprano Toni Marie Palmertree and tenor Jonathan Burton, who replaced Krassimira Stoyanova and Joseph Calleja respectively, were an absolute delight in the production, which, under the careful baton of music director designate Enrique Mazzola, was a true triumph over all odds.

That being said, the night could have gone very differently. Though the overture was exceedingly graceful and well-paced (the winds in particular were spectacular throughout Verdi’s tempestuous score), the chorus was incredibly hushed during the opening choral work, “Ti desta, Luisa, regina de’ cori,” and there seemed to be hints of intonation issues that continued to haunt most of the first act.

However, while the chorus went on a mission to find its collective voice (which took until the second act), baritone Quinn Kelsey and Miss Palmertree stole the stage in their opening aria, “Ecco mia figlia.” Kelsey is a Lyric favorite and Ryan Opera Center alumnus who won significant praise for his rendition of another Verdi baritone, Giorgio Germont, last year at the Metropolitan Opera’s La Traviata. Here, he put his bellowing instrument to wonderful use, filling every seat in the hall with an incredibly graceful tone.

Palmertree, covering for Bulgarian soprano Krassimira Stoyanova, was a very pleasant surprise in the opera’s title role. Often, young roles in opera are portrayed unconvincingly by older singers—Palmertree, on the other hand, has the distinct advantage of being both quite young and incredibly expressive. Her aria “Lo vidi e’l primo palpito,” an incredibly emotional piece concerning love’s infatuation, was beautifully sung. The soprano has a palpably expressive middle register that, coupled with a piercing upper register, ensured there were no issues in either hearing her sound or feeling Luisa’s love. Though, at times, it felt as if she sacrificed a pleasant tone on her high notes in order to generate more sound, she was so expressive that it was hardly noticeable.

Rodolfo, however, was an interesting character. Tenor Calleja was ill with a cold that had plagued him in previous productions, and though he sang the first act, his voice was noticeably hindered. While he indeed has a wonderful instrument, it was obvious that it was not in good condition Saturday evening. In his first duet with Christian Van Horn, a renowned (and incredibly powerful) bass playing Rodolfo’s father, Count Walter, it was clear he was absolutely outmatched in sheer volume due to his unfortunate affliction. So, it was no surprise when it was announced that he would be unable to sing the second act, though he deserves praise for his efforts.

American tenor Burton stepped into Calleja’s boots and transformed the afternoon in his Lyric debut, truly stealing the show in the process. His first aria, Act II Scene III’s “Quando le Sere al Placido,” earned a nearly minute-long ovation from the house. His voice, incredibly lush and tranquil in tone while being très expressif, navigated Rodolfo’s yearning legato phrases with grace and heartfelt emotion; he is most certainly a tenor to follow with great interest.

The rest of the cast was equally impressive—Russian mezzo-soprano Alisa Kolosova made for an excellent Duchess Federica, clearly enjoying her grand entrance atop a 20-foot equine statue, and Soloman Howard made for a deliciously detestable Wurm—Walter’s creepy lieutenant, who constantly tries to get in the way of the two lovers before truly earning his comeuppance in the finale.

Another pleasant surprise of the evening came from Ryan Opera Center first-year Kathleen Felty singing the role of Luisa’s friend and confidant, Laura. Though the role is limited in being almost entirely recitative, her voluminous voice nevertheless made a positive impression and I look forward to seeing her again in the spring’s Die Walküre.

The set, a design owned by the San Francisco Opera, was quite spartan and rather peculiar. It featured a semicircular rear wall with sections that were raised and lowered to serve as entrances and exits. A mobile canvas board mounted on a crane moved distractingly along the stage, making clanging noises that, though not as loud as the Met’s infamous Ring Machine, made for some unpleasant retrospection. It really seemed like a clueless decision and the opera certainly could have done without it. That being said, the costumes, designed by Dunya Ramicov, and lighting, designed by Mark McCullough, were quite impressive.

Saturday night’s performance was a true showcase for Maestro Mazzola’s considerable talent. Being able to maintain the balance in an orchestra in order to support an ailing singer is no simple feat and neither is having to switch tenors halfway through the opera, but Maestro Mazzola ensured the transition was absolutely seamless. More Abbado than Karajan, the maestro—plenty confident in his expertise—knew both when to hold back, letting the orchestra and singers interact naturally, and when to push onwards, driving the music to an incredibly satisfying conclusion. From the first notes of the overture, which, faster than most interpretations, was splendid, until the very last flourish of the finale, Maestro Mazzola and his cast had the audience enraptured. If this is a taste of what the future holds when the Maestro becomes music director in 2021, there is much to get excited about.

Luisa Millers will run with three more performances through October 31. $20 student tickets are available to undergraduate students through the Lyric NEXT Program. Please visit this link: https://www.lyricopera.org/next or call the Lyric box office for more information.