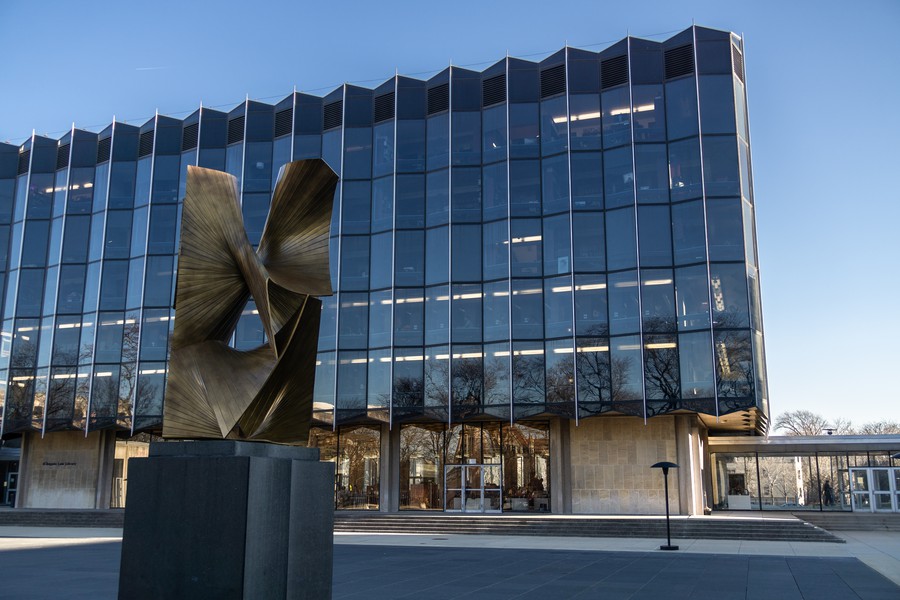 The exterior of the University of Chicago law school.

The Law School held a symposium on Friday titled “What’s the Harm: The Future of the First Amendment, which was organized by one of the Law School’s student-run academic journals, Legal Forum.

Panelists included academics and journalists from across the country. The keynote address was delivered by Cass Sunstein, a former UChicago Professor and Administrator of the White House Office of Information and Regulatory Affairs.

At the Keynote Lunch, Sunstein spoke about “lapidation,” which he defined as a disproportionate response to an individual’s transgression by some group, and its implications for free speech and the First Amendment.

He argued that lapidation is unproductive and hinders the potential for the “redemption and forgiveness” of the transgressor. He ended his remarks by urging the audience to be more empathetic.

Panels consisted of three or four speakers and a moderator. Each speaker spent ten minutes discussing a specific topic before answering questions from a moderator and audience.

The first afternoon panel posed the question “Is the First Amendment Democratic?” to its participants. University of Alabama Law School Professor Ronald J. Krotoszynski Jr. presented on how the Supreme Court has changed the way it applied the First Amendment to curtail certain expressive freedoms.

“For those seeking to use government property to speak, government employees who seek to speak out about matters of public concern, persons engaged in news gathering and reporting, students and faculty at the nation’s public schools, colleges, and universities, and persons and organizations engaged in transborder speech activities, free speech rights have been declining,” he said.

Krotoszynski argued this is due to more recent Courts rejecting “legal tests that vest judges with broad discretionary authority” in favor of “bright line rules” that lead to “a less vibrant, open, and inclusive marketplace of political ideas.”

Professor Green reexamined three Civil Rights-era First Amendment cases in light of a more recent democratic theory that stipulates that “public and political mechanisms to encourage—and duly regard—the perspectives of all” are a necessary condition for democratic participation. His work aims to advance “understanding of civil rights protest as a landmark advancement of First Amendment principles.”

Moskowitz presented an essay drawn from their book “The Case Against Free Speech: The First Amendment, Fascism, and the Future of Dissent,” which traces how conservatives used money and influence to mold the current understanding of free speech. “Far-right groups,” they said, “have pushed for a version of free speech that defines money as speech, and ensures conservatives are protected wherever they speak.”

Each panelist will contribute a paper to the journal’s annual issue. Nika Arzoumanian, the Editor in Chief of Legal Forum, said that this year’s decision to include panelists from beyond the legal academy was part of an effort to provide “different sorts of perspectives” of the First Amendment. In previous years, panelists were almost exclusively law school professors.

The symposium occurs annually and focuses on a different topic every year. Arzoumanian said that the number of topical Free Speech issues and the presence of many eminent First Amendment scholars at the Law School played a role in choosing this year’s topic.