EXPO Chicago Shows Off the Face of Contemporary Art 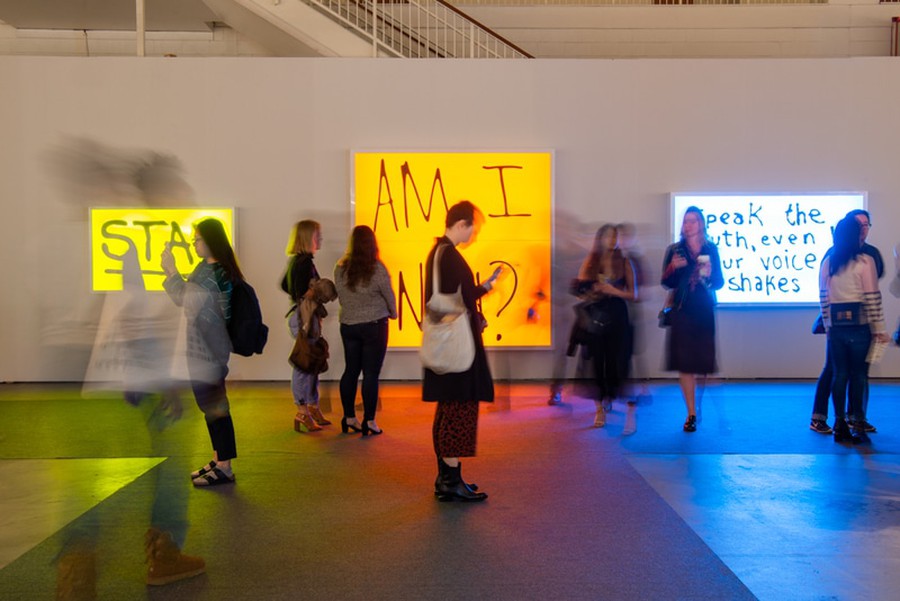 Over 170 booths were set up for this year’s fair, split between established commercial galleries seeking to sell art and cultural spaces hosting curated exhibitions.

On September 19, I had the pleasure of attending EXPO Chicago, one of the premiere contemporary art fairs in the country. EXPO is held annually at Navy Pier and lasts four days, the first being reserved for VIP guests. Over 170 booths were set up for this year’s fair, split between established commercial galleries seeking to sell art and cultural spaces hosting curated exhibitions.

As curious curators and eccentric onlookers alike inspected hundreds of artworks, ranging from paintings to installations, I gleaned some artistic insight from curator Alison Katz-Wolfson, cooperator of Neumann Wolfson galleries in New York City. She showed me a few of Michael Bevilacqua’s pieces, which are a surrealistic blend of references to pop art, alternative rock, rap music, and video games. Uniting his pieces is the motif of an ominous hooded figure who features throughout much of his work.

When the doors opened on Friday at 11 a.m., I realized how slight a portion I had seen of EXPO the previous day. Exhibitors at the fair were grouped into five categories: Galleries, Editions + Books, Profile, Exposure, and Special Exhibitions. There were several fantastic Special Exhibitions—mini-shows curated around a theme—run by familiar spaces such as the Hyde Park Arts Center and the UChicago Department of Visual Arts. Many young and emerging artists managed to showcase their works and gain public traction at the exposure booths.

One of the most arresting exhibits at EXPO came in the form of a video, just over 70 minutes, of what looked like a young girl’s head resting on a pillow made of slowly melting ice. Below the monitor were a pair of headphones and a nameplate with the word “ICE.” It took me a few minutes to understand the audiovisual context of the piece: The audio was the entirety of a court case brought up against the U.S. government protesting the inhumane conditions of ICE detention centers where children are currently held. The ice pillow came to represent something far greater than meets the eye; its hard exterior and bitter coldness emphasized the harsh conditions many children are kept under, and the transient nature of the ice showed how these children were slowly melting away from public view.

June Edmonds, an African-American artist who lays claim to a prolific body of work, also stood out at EXPO with some of her newest pieces. One, entitled Four Years in the White House Flag, consists of dozens of colored stripes, all overlapping each other in an arrangement reminiscent of the American flag. When I questioned the curator about the piece, he told me Edmonds used different combinations of red, blue, and yellow to create her piece, and that these happen to be the three primary colors found in brown and black skin. Another artist to note was architect Anish Kapoor, who exhibited a multicolored reflective circular piece redolent of his famous Cloud Gate.

In conjunction with the fair, several openings and special events took place all over the city. Around campus, Logan Center Exhibitions, the Smart Museum, and the Neubauer Collegium hosted opening receptions for their exhibitions, the Renaissance Society and the DuSable Museum held extended viewing hours, and the Oriental Institute kicked off its centennial celebrations.

Overall, Chicago’s Navy Pier this past weekend was abound with creatives, rising stars, veteran artists, and financiers of the art world. EXPO was a riveting glimpse into Chicago as a nexus of recent artistic achievement and a depiction of the face of contemporary art to come.