As students moved back to campus, jazz lovers from around the world flocked to the South Side for the 13th annual Hyde Park Jazz Festival. 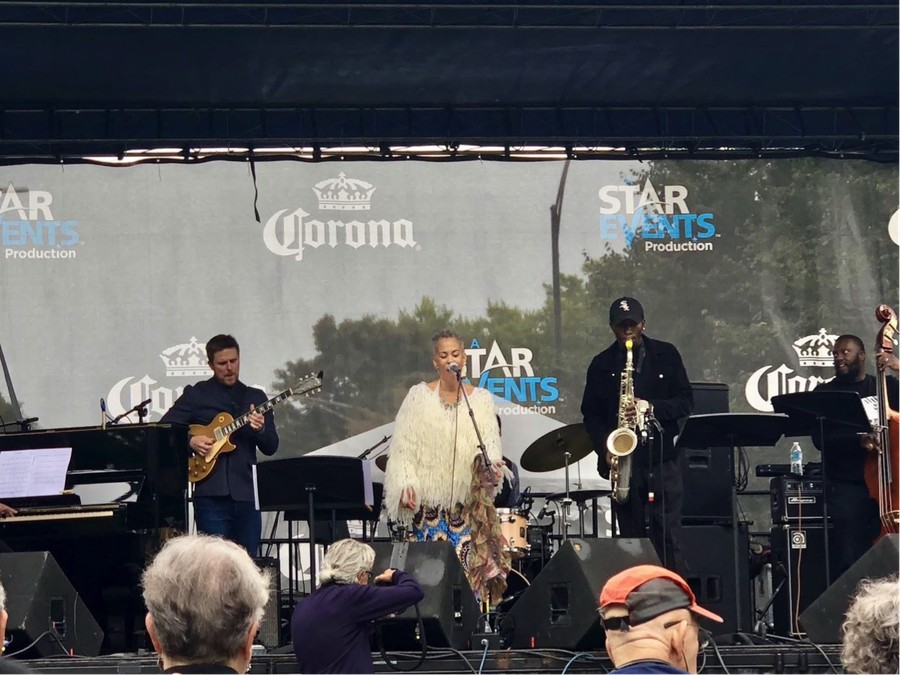 Maggie Brown and her band rock the stage at the Hyde Park Jazz Festival.

“When you have people who sit down and listen to the music and focus on it, it brings together people who normally wouldn’t come together,” jazz pianist Richard Johnson says. “That right there is already crossing a big bridge.”

Johnson was one of the many performers at this year’s Hyde Park Jazz Festival. The 13th iteration of this annual festival brought together musicians, the Hyde Park community, and more than 250 volunteers last Saturday and Sunday. Performances ran from 1 p.m. to midnight on Saturday and 1 p.m. to 7 p.m. on Sunday at 10 different venues in the neighborhood, including the Logan Center for the Arts, International House, and two outdoor stages on Midway Plaisance.

“While some musicians are based in Hyde Park, others are invited by the festival from all over the world,” artistic and executive director Kate Dumbleton said. Her goal is to include musicians from a variety of backgrounds and to invite “local, emerging, established, international, [and] national”musicians to perform at the festival. On Saturday, at Rockefeller Memorial Chapel, Amir ElSaffar’s Ahwaal premiered in Chicago and featured Polish artists including bassist Ksawery Wójciński, multi-instrumentalist Wacław Zimpel, and cellist Maciej Młodawski. Next year, the festival plans to bring artists from Africa to facilitate broader international exchange of jazz.

Live jazz performances are a growing phenomenon in the Hyde Park community, and “jazz is again emerging here,” according to Junell. The managing director also mentioned the Third Tuesday Jazz program hosted by the Logan Center for the Arts, where musicians play live at Café Logan on the third Tuesday of each month. The next performances will be on October 15 at 7:30 p.m. and 9 p.m., and will feature saxophonist Sharel Cassity. Sunday Evening Jazz, a weekly performance series organized by Hyde Park Jazz Society, recently moved its venue to the Promontory Music Venue where it will be holding its first performance, the Alexander/McLean Project, on October 27.

For University students interested in showcasing their musical skills, Johnson, who performed at the Logan Center Performance Penthouse, recommends Andy’s Jazz Club, where he plays every Sunday. High school students and college students are welcome to perform at the club every Sunday starting at 6:30 p.m. “That’s a time for people like myself to notice up-and-coming young people and give them a chance to play and give them opportunities and recommendations for tours and gigs.” Johnson also recommends Jazz Showcase for those who want to listen to and meet world-class talents.

“Right now, jazz is opening the door to a lot of other scholars of music. It used to be jazz or bebop or swing, you know, like, 60 years ago.” Johnson said. “Now it’s opened the door to Roman music, Latin music, Caribbean music. A lot of people are bringing their culture into their music so the music’s gonna keep growing. The door’s getting wider, letting more people in.”