"TRU – A Musical for Mental Health" Teases Something Much Bigger 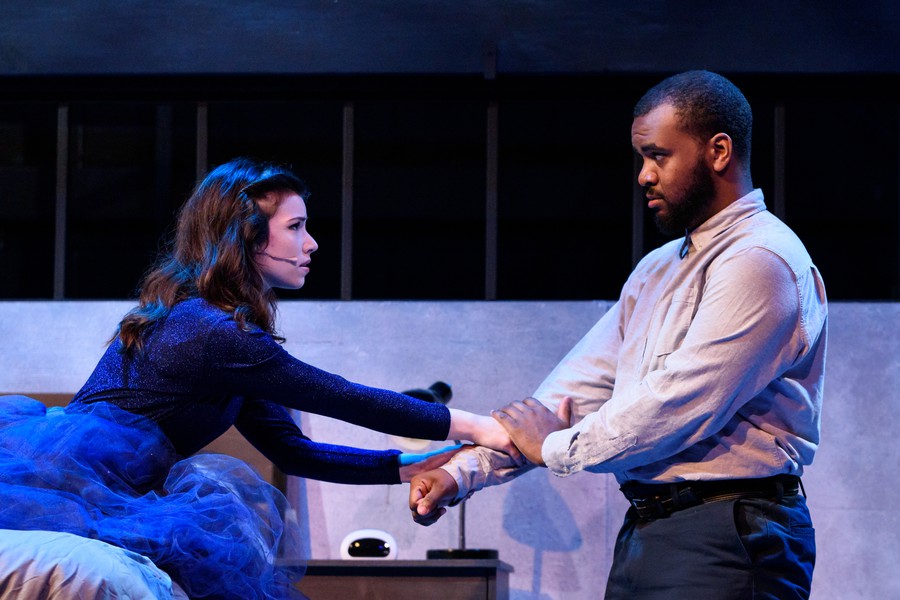 Meredith Kochan's Her personifies the dangers of one's draining relationship with mental illness.

TRU has the makings of what could be one of the most important musicals of our time. But I don’t think it’s quite there yet.

With the tagline “a musical for mental health,” TRU is cowritten by Leo Fotos and UChicago alumnus David Gosz. The musical looks into the life of Truman (Stephen “Blu” Allen), a high school teacher whose mental illness is personified as a toxic relationship with the character Her (Meredith Kochan). We also get a glimpse of Isla (Shannon McEldowney), a young artist seeking inspiration, but who is bogged down by her own anxieties about her work. Also present: Isla’s grandma Gail (  marssie Mencotti), a lively old lady who runs the flower shop where Isla works; Truman’s father Mark (Marc Prince), who returns to try to bond with his son after learning of his personal issues; and Burton (Elyssa Treviño), one of Truman’s students who has complicated feelings about her birth parents.

TRU aims to change the stigma surrounding mental illness by taking a more honest approach, humanizing mental health conversations, in a way few other shows attempt. I still believe TRU has the potential to transform our perceptions of mental health, but that effort is complicated by a number of issues that make this production seem more like an early draft than a fully fleshed-out show.

The portrayal of the character Her proved to be a surprisingly well-handled and important take on mental illness. Although I was initially skeptical of the idea of personifying mental illness as a toxic relationship, I ultimately found its actual depiction in the show promising. Her, despite being a literal metaphor, still behaves as a living, breathing character whose influence over Truman is more complicated than simply a danger to his mental state. Consequently, thanks in part to Meredith Kochan and Blu Allen’s performances, Truman’s mental illness is not dismissed as a caricature but instead is a living thing, a part of him that he cannot just ignore.

However, the depiction of this relationship is an unfortunate victim of some of TRU’s broader problems. For one, there are too many plot threads for any single storyline to get the focus it needs. Isla’s anxieties about her art get scant scenes that, for the most part, fail to drive her plot along. References to Truman’s family history of mental illness are infrequently referenced and shine no light on Truman’s relationship with Her. Burton contributes almost nothing to the other characters’ storylines, and instead takes away valuable time by introducing an additional conflict in Act I regarding her relationship with her birth parents, serving merely to trigger Truman’s mental health issues before Burton basically disappears for the rest of the show. The number of plot threads ties into another issue: The show is very long, clocking in at over two and a half hours. This in itself isn’t necessarily a problem, but an exorbitant amount of time (the entirety of Act I, in fact,) is spent on exposition alone, to the point that it feels as if the actual plot of the show doesn’t start until Act II.

TRU nearly fails to deliver as a “musical for mental health” because of all these problems: Most of it feels like a musical about introducing characters. In fact, because it takes so long to acknowledge Her’s status and relationship with Truman, it almost feels like TRU is running away from addressing mental health in any useful manner.

All that said, the message TRU tries to put forth isn’t actually missing from the show—rather, it’s buried by issues inherent to any developing work. And when TRU’s plot finally shines through in Act II, it really shines. Gosz and Fotos’s music and lyrics deftly reflect the characters’ personalities in a way that surpasses some recent Broadway musicals. The dialogue shows the intense care given to depicting the conversation surrounding mental health. Despite dealing with some heavy themes, director Taylor Pasche keeps the mood relatively light, and any audience member is bound to find these characters relatable.

This is due in part to the show’s talented cast, who prove to be powerhouses. Particular praise has to be given to Blu Allen and Meredith Kochan, who weave the complexities of a person’s relationship with mental illness in a manner that is in some ways fantastical, but also familiar to the audience. As Isla Claire, Shannon McEldowney makes the most out of a role that could use more development, showcasing the intricacies of her character’s mind as she tries to find artistic inspiration. Marc Prince wonderfully depicts Mark’s uneasy attempts to reconnect with his son—not always succeeding, but still maintaining the best intentions. The big scene-stealer in this show is marssie Mencotti as Gail, easily capturing the audience’s attention whenever she is onstage with deft comedic timing and genuine heart behind Gail’s concern for Truman and Isla.

Overall, this musical has some ways to go in its development to reach the heights it clearly wants to reach. But in its current form, what can make TRU a truly great musical is there, and this production sports great music and strong performances that make me hopeful for this show’s future. I recommend you check out TRU at Stage 773 before it closes on November 24; I, for one, will continue to follow TRU through any future incarnations.