Moshing For the Public Good: JPEGMAFIA at Bottom Lounge

JPEGMAFIA’s music serves a political purpose, but, like punk, also caters to an emotional one. 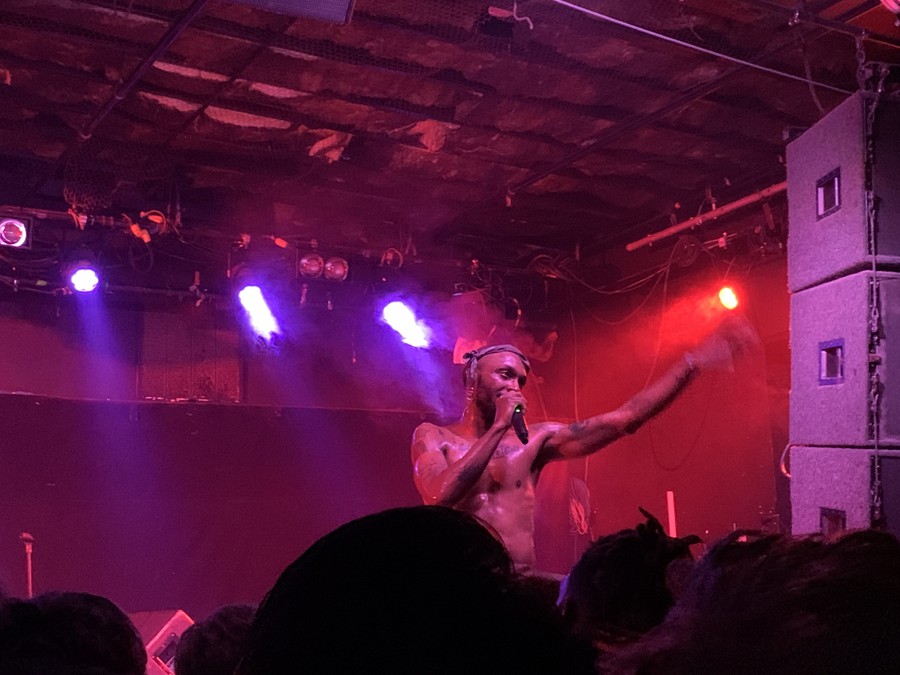 I joke with my friends at the JPEGMAFIA concert: I think that mosh pits are a societal good because they provide a way for young men with lots of testosterone to let out aggression in a positive way. But I think it’s partially true. Andrew Savage of Parquet Courts once remarked that punk music didn’t need to change things politically -just be an outlet for frustrations. JPEGMAFIA’s music serves a political purpose, but, like punk, also caters to an emotional one. The nameless anger and formless energy that come from being a young adult male has to be let out some way, and better that it be in the mosh pit than out on the streets.

It is known that JPEGMAFIA shows are awesome. I saw him once before at Coachella this year, and his set was probably the highlight of the whole festival. When I told my friend I was seeing JPEG live, he told me to prepare for a religious experience. Going in, I knew what to expect. JPEGMAFIA has often been compared, much to his chagrin, to Death Grips, the experimental and extremely aggressive rap group. The comparison is clear: aggressive hip hop made more aggressive, experimental production, and the embrace of the internet age.

Indeed, JPEGMAFIA is anger given musical form, violence put on top of a beat. So you can imagine how much energy gets brought into the venue when he performs. JPEG goes up on stage alone, without a shirt, without any stage setup save a laptop, and makes up for it with a concussive force that could knock you down with its power. Even so, JPEG’s raw power couldn’t top the crowd’s massive energy. A crowd’s enthusiasm can make or break a show; with JPEG, it always makes it. Like a punk concert, I go to JPEG for the crowd; it is the ultimate standard in audience participation.

The mosh pit is a magical place; inside of it, a group of people transforms into an abstract wall of body matter that one can push up against with all one’s might and bounce off like a pinball. At JPEGMAFIA, many young males are gathered to let out their nameless anger against other people’s bodies; I am one of them. It’s a -arguably- harmless affair, but not a comfortable one. When JPEG gets on stage, you can tell the crowd is not going to hold anything back. The performer came with his own energy too, with his admission of taking 50 mg of edibles before going on stage.

JPEG tells the crowd he has to take breaks between songs, but he sings every song with the full force of the studio recording and beyond. And the crowd -primarily white, male 20 year-olds- absorbs that energy and throws it back out. The roiling mass of bodies quiets down at some points, thankfully; JPEG intersperses high-octane beating-people-up type songs with slower ones, at one point launching into his own freestyle commenting on Kanye West and, at another point, taking a minute to sing “No Scrubs” along with the crowd.

JPEG played all the crowd-pleasers; I was pleasantly surprised by “Puff Daddy”, and “I Cannot F***ing Wait Until Morrissey Dies.” He never leaves anything on the table, and this night was no exception. I got to briefly meet JPEG after the show, and out of that brief interaction I got a picture of me smiling goofily next to the man himself, as well as a single question: “Has your master’s in journalism ever been useful to you?”

The answer? “Not once. Not fucking once. People just like to remind me about it on Twitter.”

JPEGMAFIA truly is the industry standard of audience participation. I could not imagine my disappointment if I had gone to the show and the crowd had been mild or timid. A concussive force of music  needs to be met by the concussive force of the audience. However, I think that a JPEGMAFIA show would never have a lackluster crowd, because I imagine that most of the people going to see him live have the same idea as I do:

To let out aggression in a way that no one will judge you, or arrest you, for.