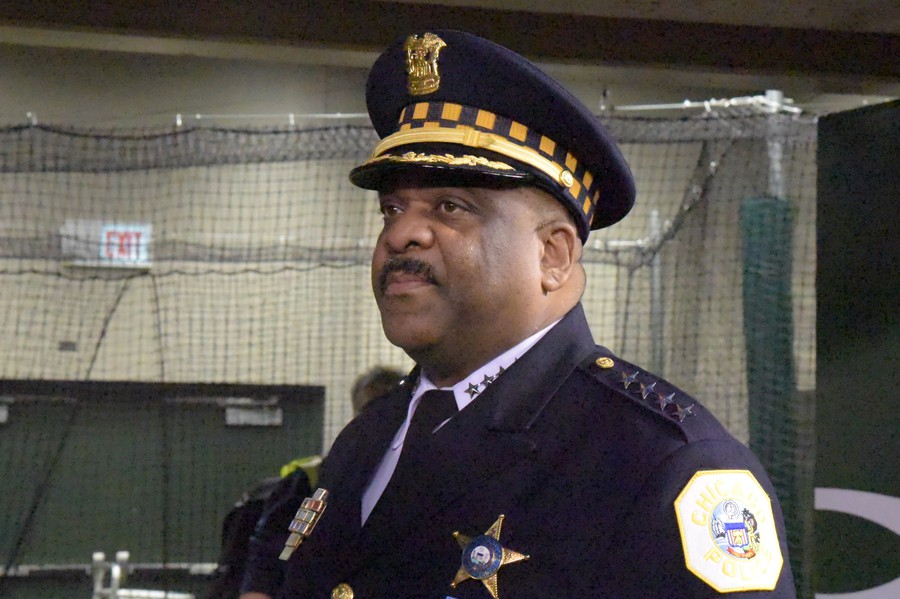 By Jack Cruz-Alvarez   and Pranathi Posa

Chicago Police Department (CPD) superintendent Eddie Johnson spoke about his decision to retire and the challenges the CPD has faced over the past few years at an on-campus event last Thursday, hours after announcing that he would resign by the end of the year. The event at Ida Noyes Hall was hosted by the Institute of Politics (IOP) and was moderated by WTTW correspondent Brandis Friedman.

As superintendent, Johnson was credited with a decrease in Chicago’s crime rate but also faced criticism for what many perceived as a failure to adequately deal with incidents of police violence when he was a supervisor in the department. Charlie Beck, former chief of the Los Angeles Police Department, will take over CPD as an interim superintendent, according to the Chicago Tribune.

On his motivations for retirement, Johnson said at the event that while on a trip with his family, “it was the first time I realized how much they missed having me, and how much I missed them.... I told my wife, that was it.”

Johnson also said that the stress of the job significantly impacted his well-being, and that the toll of losing officers on the job hit him particularly hard.

“When you have a job like this, you deal with trauma every day,” he said.

On October 17, Johnson was found asleep in the driver’s seat of his car on the side of the road after a dinner at which he claims he had several drinks. Mayor Lori Lightfoot told the Chicago Sun-Times that the superintendent said a change in his medication caused him to feel ill on his way home. Johnson announced the next day that CPD would conduct an internal investigation of the incident.

Lightfoot refused to comment on whether she believes Johnson should have been driving that night, if he should have been given a sobriety test, and if CPD personnel protected him from being arrested or charged with a DUI because of his position.

“I knew how I felt that day,” Johnson said of the incident at the event. “[CPD] had a long day that day and the day before.”

Johnson also made headlines recently for his rebuttal against President Donald Trump’s criticism of Chicago’s safety. The President said that the city is less safe than Afghanistan at the International Association of Chiefs of Police meeting in the city on October 28.

Johnson skipped seeing Trump at the police chiefs’ meeting. The same day, Johnson held a press conference at which he said national crime statistics had fallen due to progress made in Chicago over the past three years and refuted the idea that the city is in shambles.

“The national narrative that Chicago is a city on fire is just not true,” Johnson said at the press conference. “We have our challenges, on the South and West Side. But I also want to remind people we have 17 neighborhoods safer than Manhattan and L.A.”

During Johnson’s time as superintendent, which began in April of 2016, gun violence has consistently decreased and remained at a four-year low through September of this year, according to the Chicago Sun-Times.

Johnson said at the IOP event that he did not regret his choice not to see Trump. He also emphasized the need for immigrant communities to be able to trust police officers.

“I grew up in Cabrini-Green. I saw racism at its worst,” Johnson said at the IOP event.

Cabrini-Green was a public housing project on the Near North Side that was demolished in 1995. The inability of the Chicago Housing Authority to properly maintain and fund the project resulted in a rise of poverty, crime, and gang violence in the area.

Due to its location between Lincoln Park and the Gold Coast, Chicago’s wealthiest neighborhoods, Cabrini-Green quickly gained national focus as clashes with the police became more frequent and the area became racially segregated.

“We had a lot of good cops in Cabrini-Green, but there were some we knew to stay away from,” he said.

While Johnson was superintendent, a 2017 U.S. Department of Justice (DOJ) investigation found a “pattern of unlawful force” within the CPD. Reporters with the Invisible Institute found that Johnson had a pattern of ignoring incidents of police violence and approving police shootings while he served as a senior CPD supervisor before his appointment to superintendent, during which time he oversaw the investigation into the police shooting death of Rekia Boyd in March of 2012.

“It ensures that we get the funding for our training.... It will force the CPD to partner with citizens,” he said, adding, “I have no problem with another set of eyes looking at what we do.”

Johnson indicated that the CPD has made continued progress over the past few years.

While Johnson admitted that “it takes seven to eight years to change police culture,” he disagreed with a statement from the American Civil Liberties Union (ACLU) which stated that the CPD “continues to lag behind police agencies in other communities” in terms of its relations with people of color in the community.

In particular, Johnson cited how residents in immigrant communities helped identify perpetrators in the recent shooting of a seven-year-old girl on Halloween night as demonstrating growing trust between the CPD and community members.

On diversity within the police force—in which Black and Latino officers remain underrepresented, despite efforts at increased minority hiring—Johnson said at the event: “The city is a third Black, a third white, a third Hispanic.... Our police department should reflect that,” but added, “if they don’t apply to take the test, I can’t put them out there.”

Johnson said he believes trauma treatment and prevention is a major issue that police officers face, with the stigma surrounding it being the “biggest problem.”

He mentioned that while the number of psychologists in the CPD has gone up from three to 11, “somewhere in the 20s would probably be a better number.” Johnson then told his own story of calling a counselor at 2 a.m. while feeling overwhelmed.

“It was like the weight of the world was lifted off my shoulders,'' he said.

CPD has also been dealing with a low homicide clearance rate, which is the percentage of total homicide cases for which officers have arrested or identified a suspect. The FBI considers 60 percent an acceptable figure for a municipal police force; in 2018, CPD cleared just 45 percent of homicides.

“We neglected our detective division,” Johnson said of the low clearance rate at the event. “I found that when our detectives got a [surveillance] video from the store, they didn’t have the equipment to view the video.”

Noting that this issue has since been fixed, Johnson stressed the importance of better witness protection to encourage witnesses to come forward and help with solving cases.

The superintendent also called for universal background checks on firearm purchases, saying, “I don’t know why we make it so easy to get illegal guns.”

This article has been updated to credit Maroon reporter Dimitriy Leksanov, who contributed reporting.