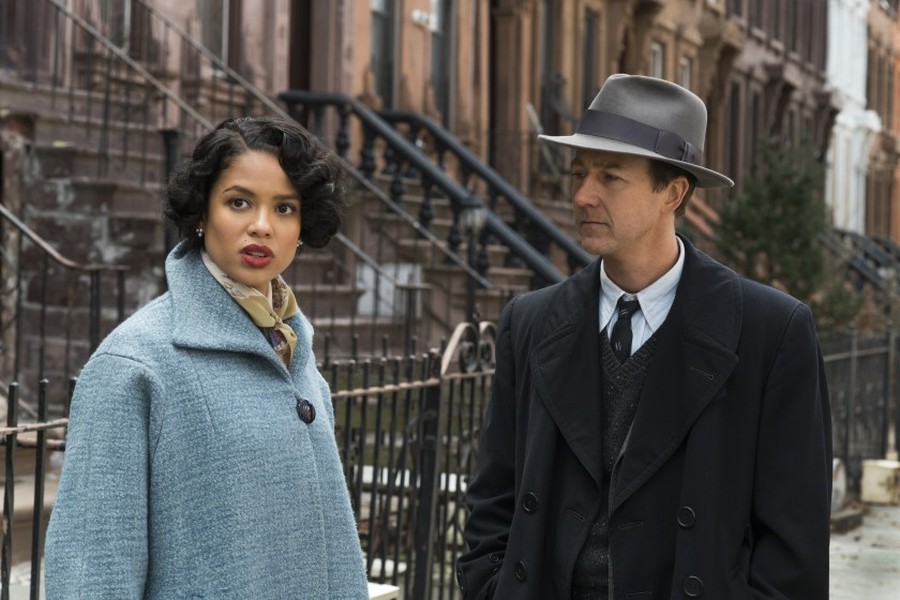 Set in the 1950s rather than the 1990s, Edward Norton’s Motherless Brooklyn takes inspiration from Jonathan Lethem’s eponymous novel about a detective with Tourette’s syndrome. In his loose adaptation, Norton plays Lionel Essrog, an employee at a grimy private detective’s office, working for his childhood friend, protector, and boss, Frank Minna (Bruce Willis).

While the movie’s plot depends on the purported bond between Essrog and Minna, we see only the shadow of this bond. After Minna is shot dead in the first few minutes of the movie, Essrog’s sense of duty, or need for closure, sends him on a spiraling hunt for answers that occupies the rest of the storyline.

While drawing on many cop-film tropes, Motherless Brooklyn is impressively unique in how proximate its spiraling hunt stays. No matter how elaborate the scandals become, and no matter how many layers Essrog uncovers through the most cliché clues (including the finding of a matchbook from a mysterious jazz club and an envelope with incriminating information left for him in a lockbox at Penn Station), the movie never expands beyond the city limits. If anything, the plot worms deeper and deeper into the city’s heart, winding up with a cast of characters of local activists, jazz musicians, and in the center of it all, Trump-like power broker Moses Randolph (Alec Baldwin).

This locality challenges the modern viewer’s expectations, created by recently well-funded action movies and shows, that at some point in every storyline someone will hop on a plane and wind up halfway around the world. But in Motherless Brooklyn, Norton demonstrates how unromantically close to home a scandal can be and remain. The movie is set in the town hall, at your local jazz club, between brothers and city planners, and it revolves around issues as mundane as housing, bridges, and plumbing.

Running like a party trick throughout the movie are Essrog’s “tics” (never explicitly named as Tourette’s syndrome). His mind, as he so eloquently puts it perhaps a few too many times, is all tangled up like a piece of string that he just cannot stop pulling at. Inside, his anarchist mind “can’t stop twisting things around, words and sounds especially…playing with them until they come out right.” At the script’s best, his blurted phrases are a wordy and comical airing of what is already on everyone’s minds. But even without his verbose tics, the movie is nonstop talking, never using everyday language when there is clearly a clever euphemism that could be used instead. Often times, Essrog’s Tourette’s simply draws attention to the already meaningless language of the world in which he lives. In this way, Norton has done an amazing job building up a verbal atmosphere as rich and believable as the visual one.

Motherless Brooklyn is undeniably Edward Norton’s movie, from beginning to end. While each of the other characters is given just as much depth and intelligence, the camera always winds up back on Norton. The whole film is about Essrog, for Essrog, through the eyes of Essrog; Ultimately, that is why the movie greatly suffers from the hard-to-pinpoint deficiencies in Essrog’s character.

Perhaps it is that he is such a frustratingly perfect character. He is the humble, yet always succesful, underdog; he is charmingly quiet, yet opens up to all the right people at all the right times; he is perfectly naïve, yet can understand and earn the respect of all his cynical counterparts; and his sleuth strategies are fit for the slimiest evil genius, yet not once used for any questionable ends.

Essrog gets away with all of his Goldilocks -like characteristics partly thanks to his perfectly middle-man position within the city’s web of scandal and grime. He is merely an employee searching for answers about the death of his mentor-boss. He is immune to being bought not so much out of a pure righteousness, but because he has already been bought by Minna. Similarly middle-ground is his relationship with his tics—rather than giving him away in his sleuthing, his condition seems to actually help him gain the trust of those within the Brooklyn community who fall victim to Randolph’s careless development projects, as with graceful activist and Essrog’s love-interest, Laura Rose (Gugu Mbatha-Raw). His character is so wishy-washy, in fact, that one might easily forget that Essrog is a private detective at all. When he adopts the persona of a righteous reporter to aid in his hunt for clues, it felt as if one was watching an uplifting biopic, complete with a library research montage scene, rather than a detective film.

Motherless Brooklyn is also exhaustingly full of ambitious moral speeches. Taken on their own, some are surprisingly thought-provoking examples of rhetoric, pushing the bounds of moral relativism. Randolph, for instance, puts his ambitious vision of a future New York in terms that are hard not to be convinced by, even drawing on historical precedent such as Central Park to make his case for radical development. However, any danger of being persuaded by Randolph and his power-broker ideals officially fails when he is revealed to be yet another racist, sexist, and power-hungry individual.

Perhaps this is a fault in Motherless Brooklyn; the bad guy embodies a few too many evils—from the racism and sexism of his personal relationships, to his realist ambition for an ideal future at the cost of his constituents’ well-being in the present. Or perhaps this is intentional on Norton’s part. Like the inward-spiraling plot, one will not find abstract immorality in the city’s dirty politics. Instead, immorality can always be traced back to the individual––to the tangible and unromantic human flaws present at the heart of every negligent government.