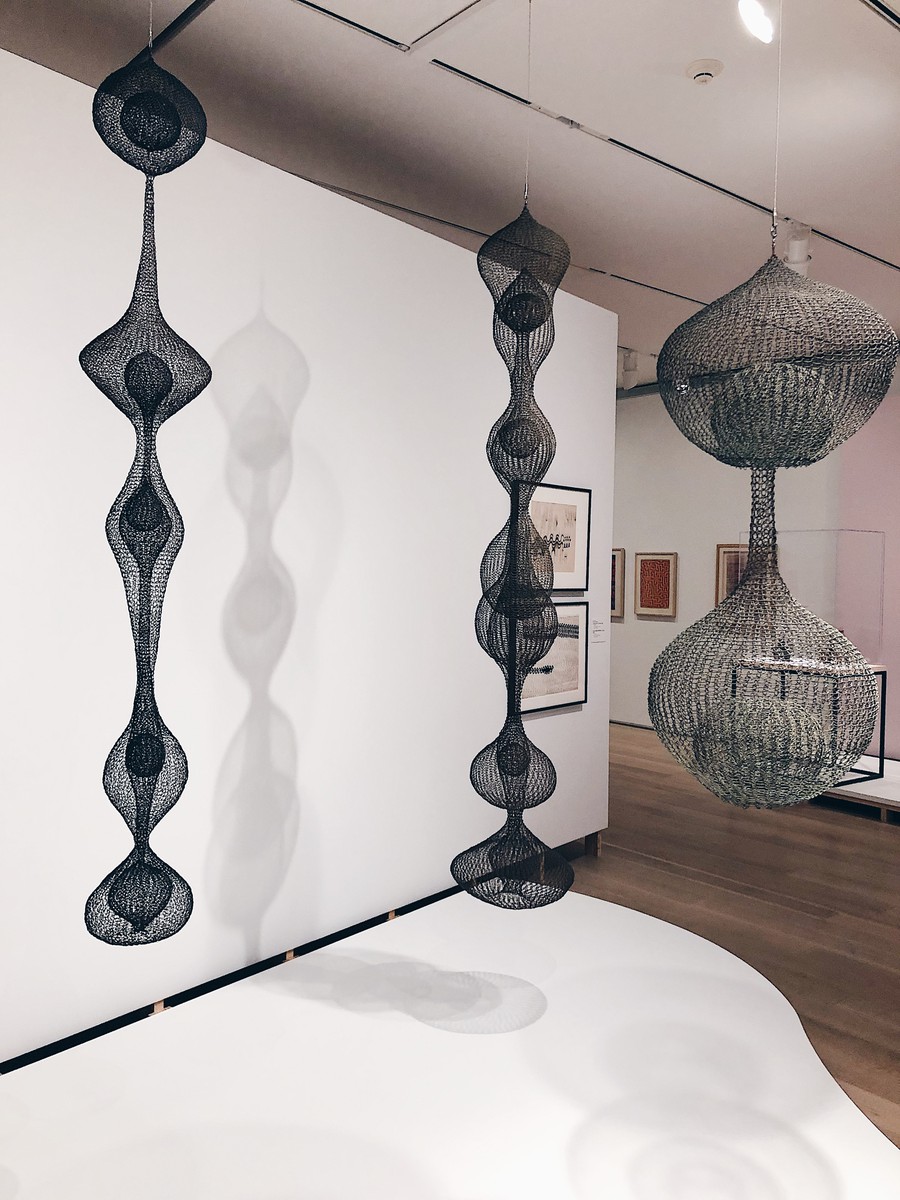 For those not well-versed in the history of design, midcentury modernism carries associations with places like Germany, Sweden, and Southern California, but the link between modernism and Mexico is less obvious. The Art Institute of Chicago’s exhibition In a Cloud, in a Wall, in a Chair: Six Modernists in Mexico at Midcentury seeks to change that. By showcasing the works of six artists (Clara Porset, Ruth Asawa, Cynthia Sargent, Sheila Hicks, Anni Albers, and Lola Álvarez Bravo) who lived or worked in Mexico between 1940 and 1970, this exhibition encourages conversation around Mexico’s contributions to modernism by locating the commonalities between these artists.

The exhibition takes its name from a quote by Clara Porset, who immigrated to Mexico in 1935 as an exile from Cuba. During her 1952 exhibition, Art In Daily Life, Porset declared, "There is design in everything...in a cloud, in a wall, in a chair, in the sea, in the sand, in a pot.” Along with the other artists on display, Porset was working at a crucial time in Mexico’s design history, a time when the Mexican government was working to establish a recognizable and cohesive design identity.

Combining traditional Mexican craft methods with newer, technologically driven techniques, Porset took her vision to the public, using furniture to express the daily lives of Mexicans. Porset’s Lounge Chair, for example, was conceived in the 1950s and was used for decades at Acapulco’s famed Pierre Mundo Imperial hotel. One of Porset’s most famous works, the Butaque Chair, infused new life into a traditional Latin American design by incorporating materials such as plant fibers and leather which made the chair suited to Mexico’s different climates. In line with the modernist ideals of the time, Porset also worked to ensure that her versions of the Butaque Chair were mass-producible and affordable. 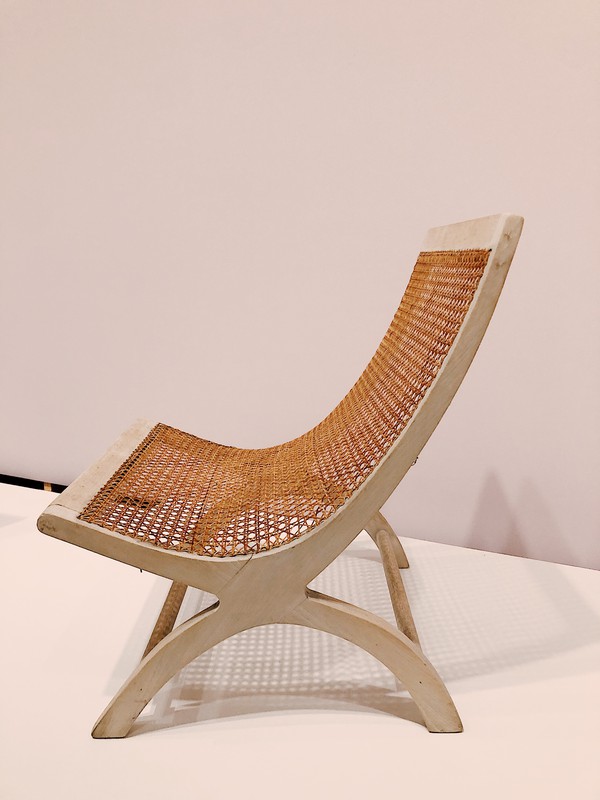 Clara Porset's Butaque chair, on display at the Art Institute of Chicago.

In contrast to Porset, the works of Ruth Asawa were not primarily functional, but rather overtly sculptural. Like several of the other artists exhibited at the Art Institute, Asawa spent her formative years at Black Mountain College in North Carolina, where she initially began exploring looped wire as a means of creating minimalistic, organic forms. It was only after her move to Mexico that Asawa learned her defining crochet loop technique, initially employed for the creation of egg baskets, but later used to produce wire sculptures. Reminiscent of the movement of water or even a spider’s web, these looped-wire sculptures can be seen hanging from the ceilings of many museums and public spaces, notably the new Whitney Museum in New York.

Moving on, Cynthia Sargent came into Mexico’s art and design scene in the 1960s after moving away from New York with her husband and artistic collaborator Wendell Riggs. Creating rugs with colorful, flowing, asymmetrical motifs, Sargent aimed to elevate tried and tested Mexican design practices, even contributing some pieces to Porset’s Art In Daily Life. Known also for her business savvy, Sargent founded the Bazaar Sábado in 1960, a weekend place of commerce still in operation, showcasing the works of artists of many places of origin. Sargent and Riggs also worked together to form the eponymous Riggs-Sargent, a company that created scalable lines of fabrics favored among the Mexican elite. As may be obvious in her work, Sargent’s asymmetrical motifs often evoke musical rhythms and were even given titles which referenced the names of famous European composers, a move that helped her gain favor with clients who considered themselves to be worldly. 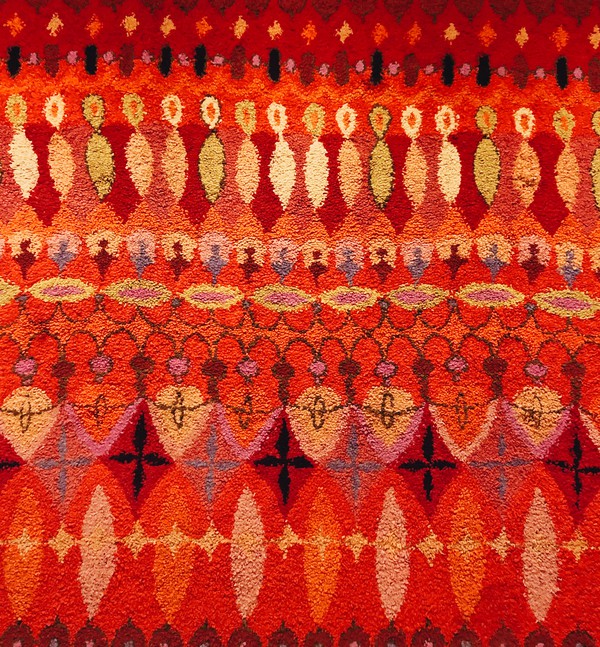 Colorful and asymmetrical motifs on Cynthia Sargent's rugs, on display at the Art Institute of Chicago.

The show also featured the works of Sheila Hicks, another notable name in Mexico’s mid-century scene. Feeling a connection to Mexico’s strong lineage of weaving, Hicks sought to deconstruct her own pieces to reveal the many parts and individual threads, often pulling apart the threads at the center of each work to allow light to pass through. “Any good weaver would look at this and say, I don't think this lady knows how to weave,” she said. In Hicks’s works then, it is the means rather than the end—the act of weaving rather than the product woven—that is central to the work.

Anni Albers, meanwhile, was a student of the revered Bauhaus, now synonymous with functional modernism, visual restraint, and abstraction. Having fled to the United States in 1933, Anni and her husband Josef Albers began teaching at Black Mountain College in North Carolina where she met Porset. Having grown fond of Mexico through Porset, the Alberses visited Mexico several times throughout the 1960s, contributing much to its abstract modern design scene. Notably, Albers realized that the abstract forms and patterns that she adored and created had existed well before her time in Indigenous Mexican and American weaving. Inspired by this history, Albers sought to combine the modern with the ancient in her designs, which were eventually mass produced and sold by Knoll throughout the 1970s.

Last but surely not least is Lola Álvarez Bravo, whose work stands out even among this distinguished group for both its medium and its message. Álvarez was a modernist in every conceivable meaning of the word: Working in photography throughout the 1950s, Álvarez sought to capture the energy and potential for modernization through photographs depicting Mexico’s industrialization. By collaging separate photographs into photomontages, Álvarez projected her socialist ideals while celebrating both the practical need for industrial modernization and the cultural need to retain Mexico’s longstanding and rich traditional modes of production.

Alvarez’s work is not only interesting in its expression of socialist and modernist Mexican thought, but also in its placement within the exhibition as a whole. The first thing one sees upon entering the double doors of the gallery is a floor-to-ceiling photomontage in landscape format, depicting industrialists hard at work in the 1950s. These photomontages permeate the entire gallery, constantly contextualizing the work of each artist within the practical concerns of the time of their production, beautifully and thoughtfully synthesizing the idea of industry and production as art.

It is frankly remarkable to find that only one of the six artists on display was actually born in Mexico. The fact that five modernists between 1940 and 1970 fell so deeply in love with Mexico, its traditions, and their potential for modernist applications serves to highlight the injustice of marginalizing Mexico’s indelible impact on design during this period. Though long overdue, it is a step in the right direction to highlight the culturally and geographically specific contributions of these artists to the greater conversation of what it meant to be modern in 20th-century Mexico.

In a Cloud, in a Wall, in a Chair: Six Modernists in Mexico at Midcentury is on view until January 12, 2020 in the Modern Wing.