"The community is fighting a proxy war over the Obama Center through this PAC," Dr. Liz Moyer said 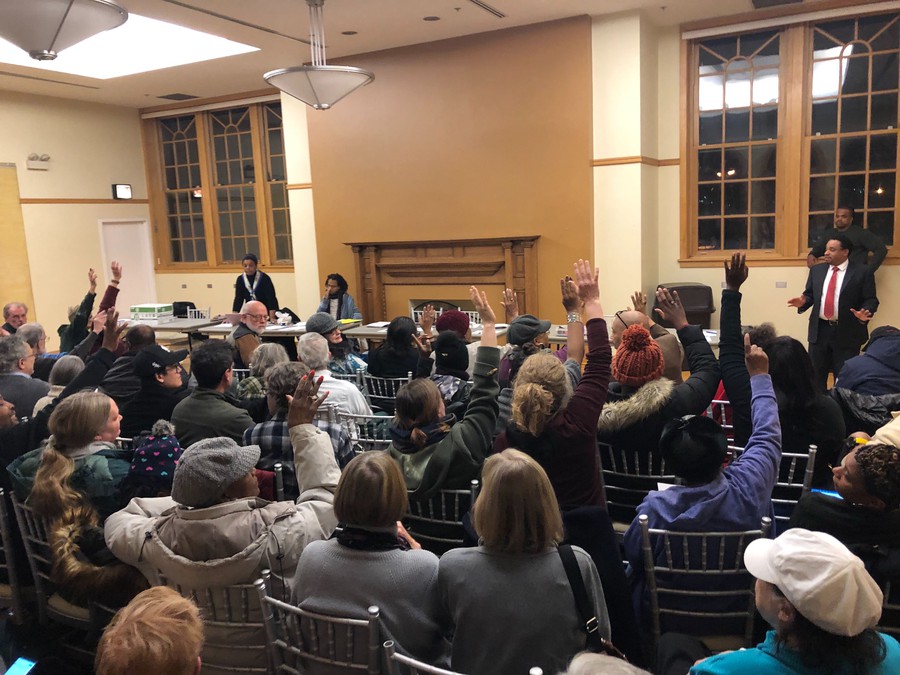 Members of the Midway Plaisance Advisory Council voted to never make a statement on the Obama Presidential Center, slated to be built in neighboring Jackson Park.

Members of the Midway Plaisance Advisory Council (MPAC) voted to never make a statement on the Obama Presidential Center and reelected all of its incumbent officers at a heated meeting last Wednesday.

Since 2015, MPAC has been involved in incorporating the community in the Midway’s physical upkeep and has organized activities including trash cleanups and tulip bulb–planting. Recently, MPAC has become a hub for debate about the hotly contested Obama Presidential Center (OPC), which is slated to be built in neighboring Jackson Park.

To compensate for lost park space in Jackson Park caused by the OPC’s construction, the City of Chicago has proposed that recreational space be built on the easternmost portion of the Midway. Plans for this additional green space are not finalized and currently undergoing federal review.

After October’s MPAC meeting drew a packed house, this month’s meeting was held in the Washington Park Refectory instead of the Midway Field House.

As soon as the meeting was called to order, Mary Anton, a candidate for treasurer and supporter of the OPC who recently opposed an anti–OPC demonstration by cutting down ribbons that protestors had tied around trees threatened by the OPC, raised a motion to suspend the regular agenda and hold the officer elections immediately. Her motion at the meeting incited debate and pushback among other attendees.

Anton later proposed a second motion for the vote to be postponed until the following month. She alleged voter suppression, citing the leadership board’s mishandling of membership forms and dissemination of election information that she viewed as misleading. A handful of members voiced support for Anton’s claims, but many attendees expressed audible doubt and frustration at her allegations. “They’re delaying the election, let’s go,” one member said. “We’re not stupid,” another attendee said. Both of Anton’s motions failed.

Elisabeth Moyer, a longtime MPAC member and an associate professor of geophysical sciences at UChicago, addressed the underlying source of tension in the room. “The community is fighting a proxy war over the Obama Center through this PAC,” she said.

Moyer then proposed a motion that MPAC “would make no statement about the Obama Center, ever.” The members voted to pass her motion.

Moyer said later in an interview that MPAC’s recent rise in attendance is due to community fears related to the OPC. “The reason people are showing up is [that] they are afraid that the PAC will come out with a statement that purports to be the voice of the community that’s not what they believe,” she said.

She also expressed her frustration with MPAC’s recent politicization, which she sees as inhibiting its normal operation. “People’s feelings about the Obama Center are getting in the way of doing all kinds of useful things that the community actually needs,” she said. “We have serious infrastructure issues. We have educational disparities. We have connections that could be made between communities. And we’re spending all our time fighting about who gets the floor to make a political statement about something. It’s just nuts.”

Stephanie Franklin, president of the Nichols Park Advisory Council (NPAC) and a park activist since 1986, feels otherwise about MPAC’s decision to remain silent on the OPC. Unlike MPAC, NPAC has been outspoken about issues relating to the OPC, releasing a statement in 2017 that said “Parks are not vacant land awaiting development; they are instead valuable assets for rejuvenation of the human spirit.”

In the statement, NPAC urged the City to revise its plans for the area, which included an OPC parking garage on the Midway and Tiger Woods’s proposal to upgrade the golf course in Jackson Park. “We question whether these plans, as currently presented, will do more harm to this historic park than they will do to actually spur economic development,” the statement writes.

Franklin voted against the motion for MPAC not to comment on the OPC. “The issue is too important to all of us to try to silence us,” Franklin said.

Voting, which was scheduled to begin at 7:35 p.m., got underway at 8:18 p.m., with 12 minutes remaining in the two-hour-long meeting. All three incumbent officers were re-elected for another one-year term, including Bronwyn Nichols Lodato as president, Donald McGruder as vice president, and Radiah Smith-Donald as secretary-treasurer.

“People seek out the public forum that they can find to express themselves,” Lodato said regarding Moyer’s comment that MPAC meetings had become a proxy war for the OPC. “As a PAC, we don’t limit against that, but we do try to keep people focused on the Midway itself.”

However, she also stressed the interconnectedness of the Midway with other local parks, noting that federal reviews relating to the OPC could affect the Midway as well. “We work very hard to make sure that the PAC, if nothing else, is informed about not just what’s happening in the Midway, but other things that are happening around the Midway that could impact it.”