SuperM flourishes on a new stage of their own as they attempt to push beyond the limits of our familiarity with K-pop. 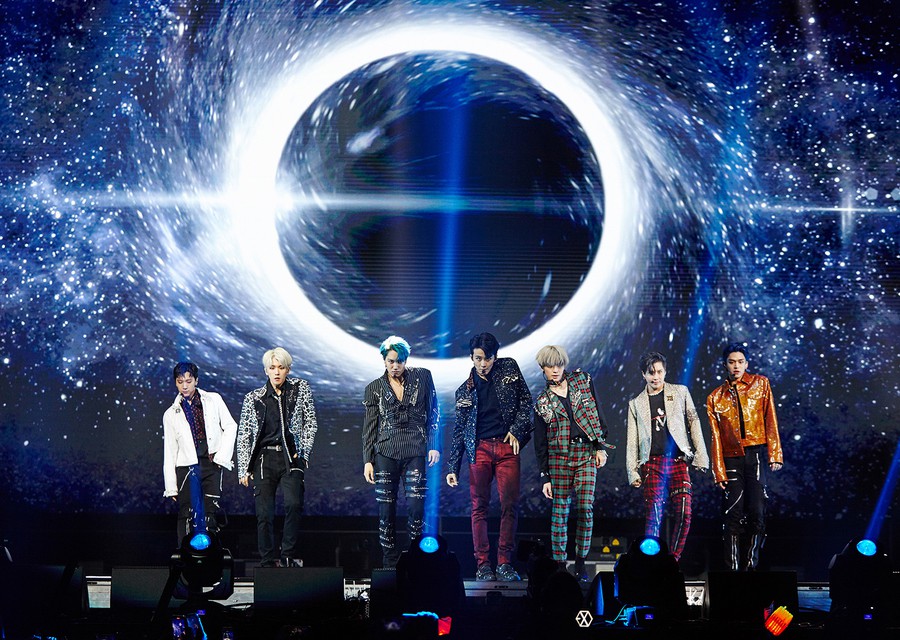 SuperM at Fort Worth.

Spanning multiple generations of K-pop, the band SuperM has a diverse fan base. In the group, SHINee’s Taemin meets EXO’s Baekhyun and Kai, NCT 127’s Taeyong and Mark, and WayV’s Ten and Lucas in a superstar combination that shocks not only the audience but also the icons themselves.

Mark, SuperM’s main English speaker, expressed his awe and gratitude to perform alongside the idols he had been a fan of growing up. Likewise, the camaraderie between relative newcomers to K-pop like Lucas and more experienced soloists like Baekhyun was fun to observe at the group’s concert. These cross-generational interactions resulted in many awkward yet playful moments that contributed to the “super” quality of this super group.

The audience itself also spanned multiple generations, ranging from young adults in their mid-20s to teens in middle school. The venue was a sea of light sticks and swag signaling the different bands and fanbases represented within SuperM’s ensemble. While you may think that these differences in age and musical preference among the artists and their fans could threaten the cohesiveness of the group, they have miraculously made it work. SuperM members have flourished on a new stage of their own as they have continually pushed the limits of what we knew as K-pop, and their unlikely dynamic seems to have worked; they have truly brought a new energy to the K-pop scene.

As much as this distinct group captured the attention of the audience, the highlights of the concert were actually hidden in the solo stages showcasing each member’s individual charm. Taemin started it off with a bang as he dramatically rose onto the stage with SHINee’s iconic “Danger” blaring behind him. His eyes gleaming wickedly as he moved his shoulders to the beat, Taemin proved why he was one of SHINee’s most dangerous heartthrobs. He became the ultimate charismatic cowboy of the night, sporting a fringe jacket which he later ripped off to reveal a sheer top that complemented his fluid dancing movements.

Jumping down onto the stage, Taemin set a mysterious atmosphere for his successor, Taeyong, who ramped up the secrecy with a glittery mask. If V from V for Vendetta had ever wanted to glam up and dabble in music, he would have been the spitting image of Taeyong. Wearing a baseball hat backwards, Taeyon oozed “bad-boy” swagger all over the stage. As a finishing touch, he was dragged away from the spotlight, slumped over his backup dancers.

These solo performances perfectly set the stage for a group introduction. With the help of a translator, SuperM joked about the pronunciation of their names and the deliciousness of Chicago’s deep-dish pizza. Alluding to Chicago’s cold weather, they vowed to heat up the night with their performance of “Supercar.”

The group kept the fire burning with their next two solo stages. Ten’s was marked by a dramatic change in mood, from edgy and mysterious to elegant and pure. His ethereal white costume against a backdrop of black-clad dancers accentuated his stage presence and emphasized his angelic voice. Once Lucas came onstage with his blue hair, bejeweled cowboy jacket, and psychedelic backdrop, however, the concert’s attitude quickly switched from exquisite grace to a playful quirkiness.

The funky rhythm and saxophone in Lucas’s performance track had the audience laughing from the start. Watching his adorable on-stage antics and foot shuffles, the crowd was unprepared for Baekhyun’s relatively serious solo. Baekhyun wore all white as he demonstrated his powerful vocal abilities. Choosing not to include background dancers, Baekhyun captivated the stadium with only a microphone and his soft vocals as he serenaded the crowd with his hit “UN Village”.

After Baekhyun’s solo, SuperM once again came together to unveil an exciting new song, “Dangerous Woman.” Then they scattered into sub-groups to perform “Too Fast” and “Baby Don’t Stop.”

The last two solos of the night followed these energetic ensemble performances. Mark, clad in a stylish blue denim jacket with chains hanging from his belt, rapped and showed off his superb dancing skills. A shirtless Kai brought stark contrast to Mark’s soft blue denim with an edgy red cap and thick chain necklace. He intensified his vampy vibe with several sensual body waves, performed to the backdrop of red mood lighting that outlined his physique.

Wrapping up all the solos, Taeyong, Ten, Kai, and Taemin performed the crowd-favorite SuperM song “No Manners.” Their intricate use of ramps illustrated the great amount of work that went into SuperM’s choreography.

By the show’s finale, all of the members had apologized more than once for how short the concert was. However, they left their fans with a promise to improve as musical performers, so they could return as an even more super SuperM. Considering the energy and dedication put into this one-hour concert, I eagerly await whatever SuperM will deliver in the future.