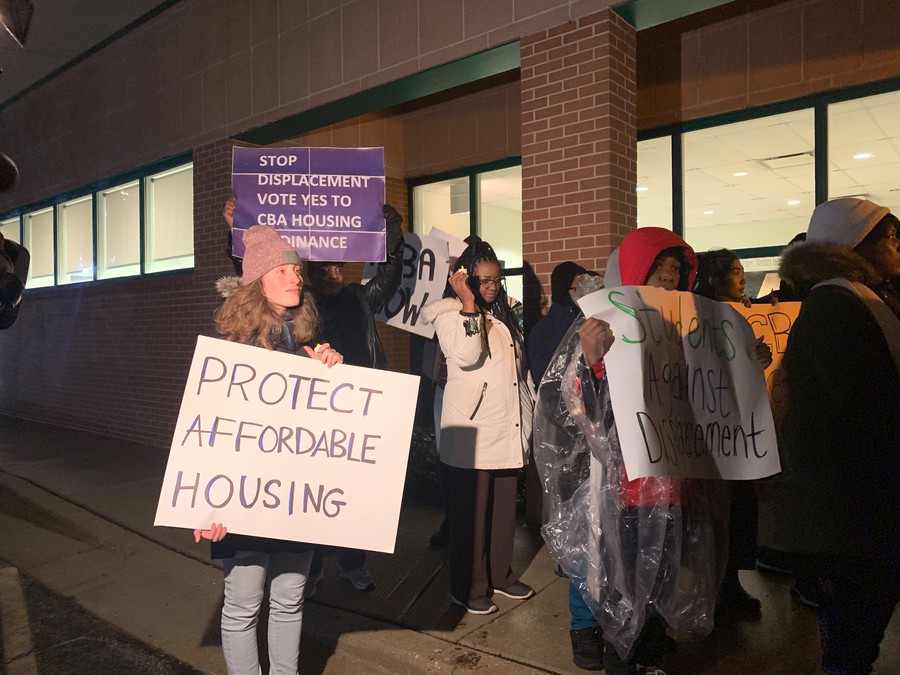 Organizers with the CBA Coalition protest outside a City affordable housing meeting.

The Obama Presidential Center Community Benefits Agreement (CBA) Coalition held a prayer vigil and protest outside a city meeting on affordable housing at the AKArama building on South Ingleside Avenue this Tuesday, urging City officials to support the CBA Housing Ordinance. Following the task force meeting, CBA advocates announced that they had secured a meeting with the City’s Department of Housing and Department of Law to discuss concerns with the ordinance.

Members of the CBA Coalition said that they hope this meeting will advance the CBA Housing Ordinance, which was introduced in the City Council in July and has since been stalled in committee. The proposed ordinance stipulates that 30 percent of housing within a two-mile radius of the OPC remains affordable to low-income residents.

About 40 people attended the protest, including a contingent from UChicago Against Displacement (UCAD), a member organization of the CBA Coalition. According to Laurel Chen, a representative from the student group, UCAD is broadly concerned with issues of displacement resulting from OPC and UChicago developments. The campaign for a CBA is currently its primary focus.

“As a result of the prayer vigil and ongoing leadership of aldermen Taylor and Hairston, representatives from the Department of Housing agreed to convene a meeting with the City’s Law Department to address outstanding concerns with the ordinance,” Chen said.

“The Coalition has been asking for this meeting since the CBA Housing Ordinance was introduced, and so we view this meeting as significant progress in advancing the ordinance towards passage.”

The ordinance also proposes the creation of an anti-displacement task force, the establishment of a community trust fund for affordable housing, and property tax relief for low- and middle-income residents.

Protestors convened at 5:30 p.m. in front of the AKArama building, where the Department of Housing meeting was scheduled to begin at 6 p.m. According to protest organizer Alex Goldenberg, the meeting’s objective was to determine the City’s affordable housing strategy in areas near the Obama Center. The meeting was not open to the press.

At 5:40 p.m., the group assembled on either side of the building’s entrance to hold a prayer. Linda Haywood, representing the organization Southside Together Organizing for Power (STOP), was the first to speak.

“Father God, we lift up CBA in the name of Jesus, and we denounce displacement in Jesus’s name,” Haywood said.

“Not asking for the world, not asking for anybody to give up any power. We’re asking them to do their duties as the mothers and fathers of this city, to do the right thing.”

The protest disbanded just after 6 p.m., with chants of “CBA” and “We’ll be back.”

The CBA has garnered widespread support from local residents, receiving overwhelming approval from voters in Wards in and around the site of the OPC in a nonbinding April referendum. The CBA has also received backing from aldermen Leslie Hairston (Fifth Ward) and Jeanette Taylor (20th Ward), who introduced the ordinance in City Hall and whose Wards the OPC will most directly affect.

Opponents of the CBA have raised concerns that it may concentrate poverty in the area and dampen the potential economic stimulus that the OPC could bring. Former President Obama has come out against the CBA, saying the OPC will be a positive economic stimulus to the South Side. The University of Chicago has also voiced concerns about the CBA, saying in a July statement that they “have concerns with the ordinance as currently proposed.”

Woods Wiser, a fourth-year in the College and a member of UCAD, told The Maroon that UCAD attended the protest to show solidarity with the CBA Coalition. “The ordinance is supported by the people in the community,” Woods said in reference to the April referendum and aldermanic endorsement of the ordinance.

This article originally misspelled the name of a student representing UCAD at the CBA protest. The student’s name is Laurel Chen, not Lauren Chen. It also misattributed the photo accompanying the article. The photo was taken by Alexis Florence, not Alexis Valencia.

Organizers with the CBA Coalition held a Teach-in to involve residents in the CBA process.