Zines and Protest: Exhibition on the Art of the Hong Kong Movement

Amid great political upheaval in Hong Kong, the PanAsia-run exhibition and panel talk offer an engaging point of intervention in the conversation for the UChicago community. 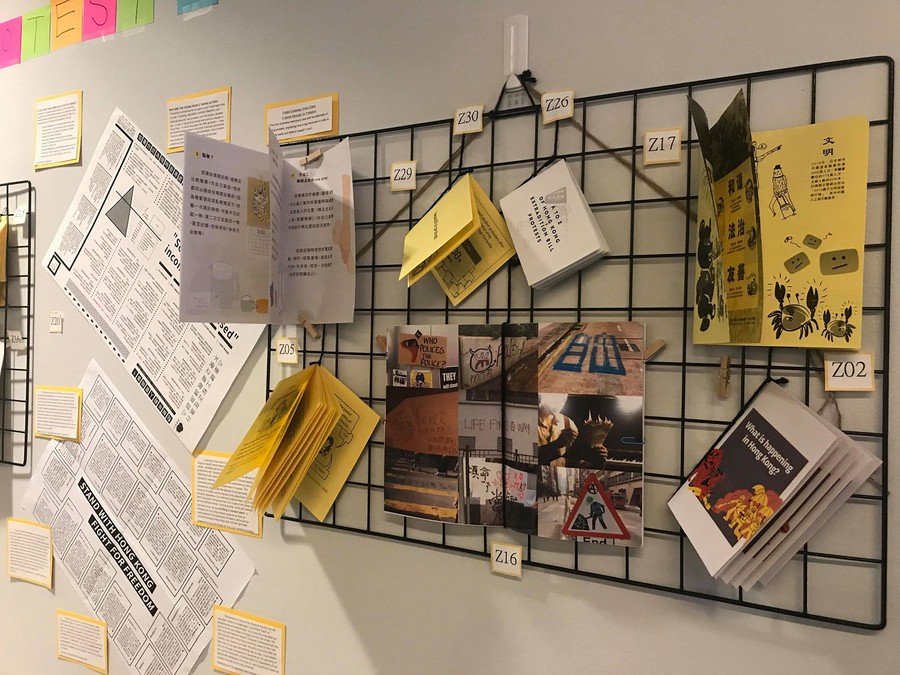 Zines hang at the Center for the Study of Race, Politics, and Culture as part of "THE ART OF PROTEST: Hong Kong Movement Zines 抗議之藝術：香港小冊子," on display through Dec 14th

The protests in Hong Kong are a heated topic of discussion in international news, but why are they important to UChicago students, and how do we join this controversial conversation? These were some of the questions PanAsian Solidarity Coalition posed last Tuesday evening, during the exhibition and complementary panel of THE ART OF PROTEST: Hong Kong Movement Zines 抗議之藝術：香港小冊子. The event organizers and panelists remained anonymous throughout the event due to the sensitivity surrounding the issue.

Zines––or self-published miniature magazines––have been used for political expression and dissemination of alternative ideologies throughout history, and Hong Kong’s zines are fitting additions to this art form’s legacy. The exhibition, located at Center for the Study of Race, Politics, and Culture through December 14, consists of 20 zines made during the recent protests, curated in collaboration with Hong Kong Zine Coop––a grassroots arts collective supporting the use of zines for political expression. While unified in their effort to support the Hong Kong protests, the zines are distinct in their design and intent. Some are educational, providing information on protocol procedures for protestors in case of arrest. Others are visually symbolic––one zine was a collection of iconographies that have emerged throughout the Hong Kong movement. However, perhaps the most powerful zines are the most minimalist ones, which use animation and poetic captions to encourage camaraderie between protesters in a time of great vulnerability.

Thus, the zines act as a practical source of guidance, but also as a symbol of the collective sentiment and humanity of the protest. “It was really important for me to show the actual material that’s being circulated in Hong Kong beyond the narratives in the news that frame things in a very simple east/west, communist/democracy binary. It’s doing a disservice to the people in Hong Kong who have been protesting for half a year,” said one of the organizers of the event. “A lot of these zines have been distributed at protests and rallies [....] This kind of firsthand, complex experience is something you can’t get from watching the news,” they added.

Complementing the exhibition opening was a panel about the Hong Kong movement and the history behind its political philosophy. Starting from the founding of Hong Kong as a British colony to its current state as a Chinese special administrative region, the panelists presented an extensive analysis of Hong Kong’s historical context and how that has shaped its present political situation. The presentation was effectively titled, “A Decades-Old Pressure Cooker––Where is the Release?” and the panelists’ message was clear: Hong Kong was subjected to a debilitating identity crisis from its founding, and protest was inevitable. The Hong Kong movement is a natural consequence of an unnatural history.

In addition to historical analysis, the panel focused on the arts, specifically the different ways in which Hong Kong protesters use the arts for political expression. With colorful Lennon Walls, flags, iconography, dress code, posters, anthems, and––finally––zines, the Hong Kong movement has been a truly sensory explosion.

Despite their efforts to remain neutral about the issue, it was clear that the panelists held pro–Hong Kong sentiments. While this could have introduced tension during the event, the organizers and panelists successfully restrained hostility by reminding the audience of the event’s neutrality. During the Q&A session, people asked a wide range of inquisitive questions, breaking out of the binary on the issue and flowing freely in intellectual rigor.

“Seeing the show of support from the audience was incredible; we had over 70 people attend, including the Global Solidarity with Hong Kong Chicago group, an elderly Chinese couple who sat right in the front, and mainland Chinese students,” one panelist said. “The event made me truly appreciative of the work that PanAsia is doing on campus, where our mission of political education comes through in our emphasis on student knowledge, power, and personal relationships.”