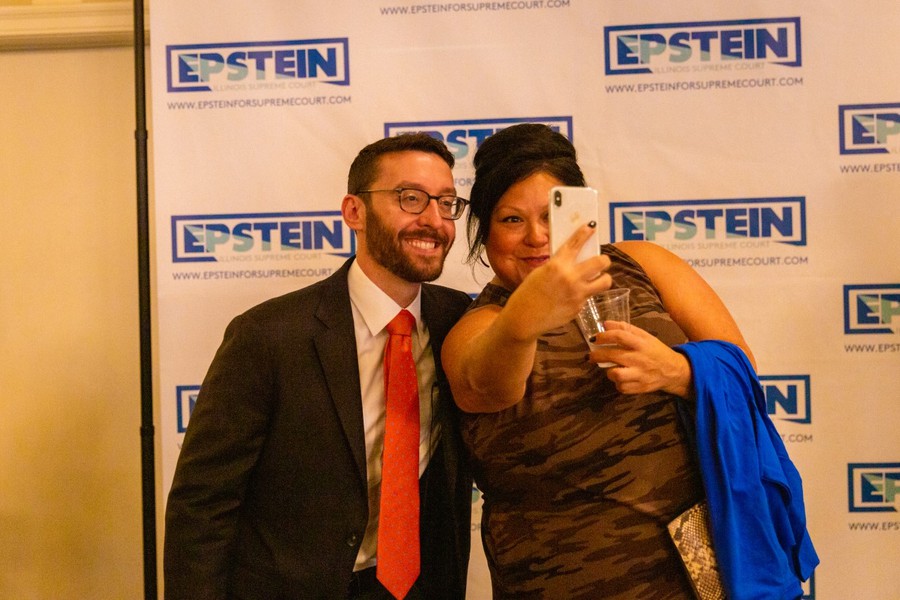 Daniel Epstein (J.D. '15) takes a selfie with a supporter.

Courtesy of Epstein for Supreme Court

In a wide-ranging interview with The Maroon, Daniel Epstein (J.D. ’15), a candidate for a seat on the Illinois Supreme Court, said that he plans to expand the Court’s involvement in determining rules for the state judicial system and enforce higher ethical standards among judges, if elected.

Epstein was born and raised in Evanston and attended the University of Chicago for law school. He is running against incumbent P. Scott Neville, Jr., who was appointed to finish the Justice Charles Freeman’s term after he retired in June.

Epstein frames his campaign as an attempt to use the power of the Court to reform the state’s criminal justice system. The Illinois Supreme Court also writes the Rules of Procedure, the Rules of Evidence, and the Rules of Ethics, in addition to being the state’s highest court. These rules are “the source code for how courts operate,” according to Epstein.

The court’s rulemaking supremacy limits what can be accomplished “through legislature and through City Council, and through the Governor’s office and through the Mayor’s office,” Epstein said. “If we want to change the rules of procedure, evidence of ethics, design, standards, data, technological stuff, truly, there are only seven people who can do a lot of this stuff.”

Trial court sentencing is one area of law where rules of ethics are especially important, according to Epstein. Currently, trial judges do not have to provide a statement explaining the reasoning behind a defendant’s sentence.

Without a written explanation for a sentencing, a convicted defendant’s right to appeal is “essentially hollow,” Epstein said. The Court has “seized authority over this process, and in some cases, abandoned responsibility.”

Epstein proposed using the court’s rulemaking power to create an independent body within the state judiciary to determine conflicts of interest. One model he suggested would make each justice and judge in the state select individuals for a panel that would review cases for potential conflicts.

Epstein said that his endorsements come from “people who are in the trenches doing work, and I think there’s a reason for that, which is that they are intimately familiar with the need for reform.”

Many changes Epstein wants to institute have already been adopted in other states.

“Sanctuary courts” is a term Epstein uses to describe a plan to enable undocumented people to sue wage thieves and abusers. “They won’t set foot in our state civil courts because they’re afraid that ICE [Immigration and Customs Enforcement] is there,” Epstein said. His change would “make it so they can appear in court via phone or via webcam so that they can sue the people who abused them without setting foot in court.”

Another policy Epstein wants to adopt from Indiana, Iowa, and Florida, is a broader use of depositions in criminal cases.

While working on the defense of an alleged murderer, Epstein said he discovered that the machine that the state’s forensic analyst used to match DNA samples was incorrectly calibrated. But since Epstein’s client pleaded guilty, the case did not go to trial and he was unable to create a public record of this faulty machine.

That machine was used in many other cases, and may have returned false positives leading to multiple wrongful convictions, Epstein said. “In Illinois, 97.4 percent in 2017 of all felony convictions ended in guilty pleas,” he said. “That’s how pattern misconduct is able to persist.”

By allowing depositions to be taken even in criminal cases that do not reach trial, Epstein said he wants to create a record of information that other attorneys can use to challenge evidence and testimony in future cases. He said, “We’ve turned our system into this kind of conveyor-belt system of justice, where its goal is to produce a resolution, but we’ve lost this other really important function, which is to provide information.”

In addition to Epstein, five judges are also running for the seat. Primary voting will take place on March 17, 2020.