Smart Talk: “The Problem with Police” 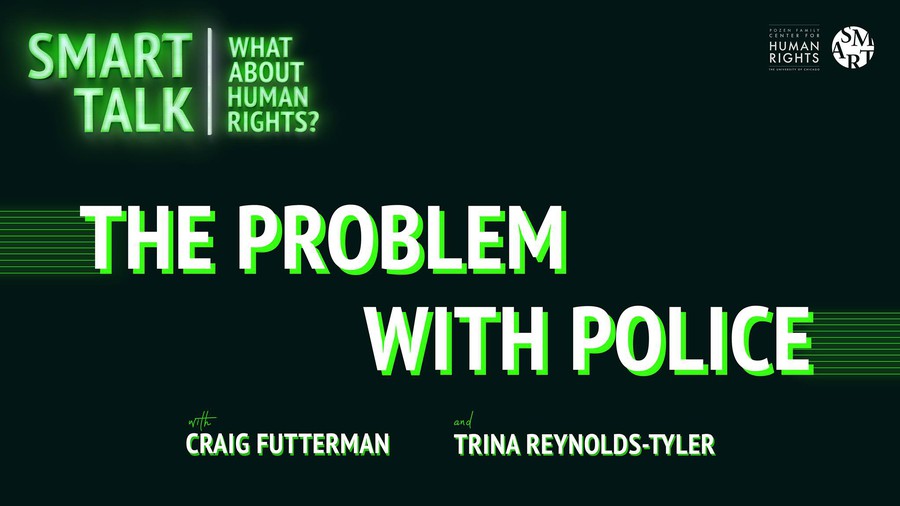 The panel of activist scholars in dialogue advocated for the abolition of police and the systems of racism and control they perpetuate.

Flanked by the panels of Meleko Mokgosi’s riveting Bread, Butter, and Power at the Smart Museum of Art on October 29, four activist scholars discussed issues of police violence, corruption, and power. The event was organized by the Pozen Family Center for Human Rights and the Smart’s Feitler Center for Academic Inquiry.

The panel included Trina Reynolds-Tyler, member of the Invisible Institute and a graduate student at the Harris School of Public Policy; Damon Williams, cofounder of the #LetUsBreathe collective; and Craig Futterman, clinical law professor at the University of Chicago Law School and civil rights attorney, most notable for his work on the Laquan McDonald case. Their discussion was moderated by Reuben Miller, an assistant professor in the School of Social Service Administration.

The conversation centered on how police function as a state monopoly on violence and what that means for people in heavily policed areas, especially the Black and brown communities on Chicago’s South and West Sides.

They began with an epistemological question: How does closeness with people within a group affect how social scientists study them? Science often treats proximity as a bias, making researchers who belong to the communities they study feel the need to distance themselves from them. However, the panel spoke to the strengths of the opposite approach, arguing that the lived experience of researchers gives them a unique framework for asking questions. A data scientist at the Harris School who was raised on the South Side of Chicago, Reynolds-Tyler pointed to her own experience as a valuable resource for evaluating policy from the perspective of both policymakers and those whose lives are most directly affected by policy.

Shifting to the topic of policing, Williams spoke to his own experience. “A police officer threatened to kill me when I was 19 years old,” he shared in an emotional moment. “I didn’t even know what that meant until I first shared it with a teacher, and she started to cry.” Living in hyper-policed spaces, “where the police are our government,” leads to the construction of fundamentally different realities for their occupants, who are conditioned to respond to harm in a way that perpetuates those same realities. The association between criminality and Blackness is “deeply embedded into the logic of this country,” Williams emphasized.

Tensions also arose between the stated role of the police in society and how their actions prop up the carceral state. The panel pointed out that the existence of the police prevents communities from dealing with their own violence, immediately escalating dangerous situations to an interaction with a militarized state organ. “I know victims of domestic abuse who are afraid to call the police because of what that entails—the damage it can have,” Reynolds-Tyler said.

Statistically, the effectiveness of police in performing their supposed functions is also called into question. Miller raised the point that less than 22 percent of murders are solved in Chicago when the victim is Black, making the police feel more like forces invading a community than its protectors. The speakers were also cognizant not to discount the substantial negative effects of recurring police interactions that do not involve assault or arrest, citing the exasperation and exhaustion of being the subject of a suspicion rooted in racism.

The evening concluded with speculations of what an abolitionist world might look like. While much of the Smart Talk had revolved around the detriments of various oppressive social structures, there was an air of inspiration and empowerment when the conversation turned to important individual victories. Drawing from historical example, “abolitionist joys,” including the removal of legal apartheid and Jim Crow regimes, were praised, as were constructive programs such as the Black Panther Party’s free breakfast program.

In light of the helplessness that activists can feel when confronting a seemingly impenetrable system, Williams asked: “How dare we say no? How dare we say [those victories] aren’t real?” Contemporary examples of positive movements included the recent Chicago teachers’ strike, in which educators, students, and community members came together to demand better conditions for their children, and the recent passage of a reparations ordinance for victims of police violence in Chicago.

“The solution looks like community,” Williams concluded. “We are violent because we are living in artificial scarcity; our land relationships demand a certain kind of labor from us. A system that allows homelessness to exist when there are more than enough empty homes is one of violence.”