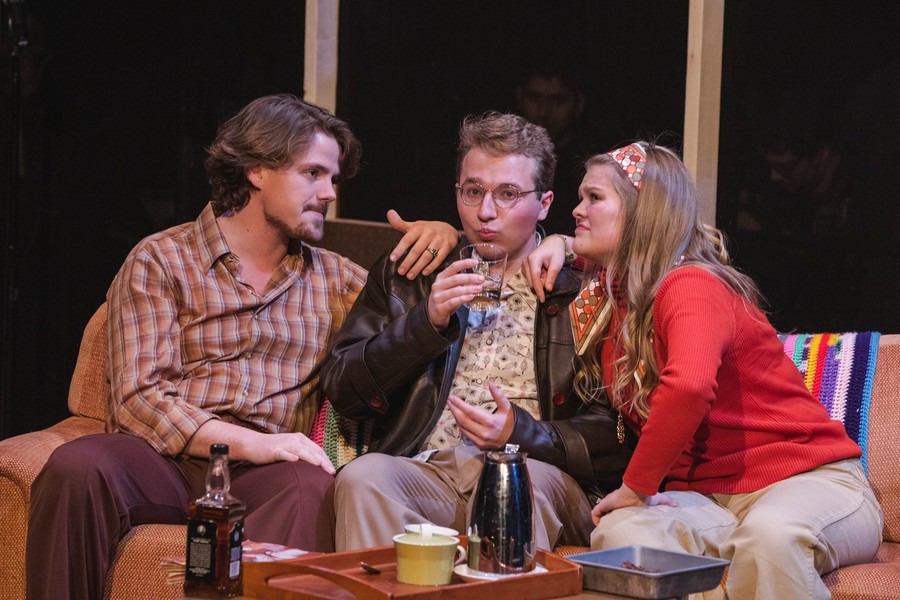 Hal Prince, the American theatre legend who directed the first Broadway production of Stephen Sondheim and George Furth’s musical Company in 1970, passed away in July. He leaves behind him a vast legacy and no doubt a gaping hole in the world of musical theatre. But I hope it’s not too dramatic to say that UChicago student directors Caitlyn Klum and Emily Lynch, along with associate director Franz Harling, are already more than picking up the slack.

I saw the UT production of Company twice, on the first night and then again at its closing performance, and left—not with tears in my eyes; it’s not that kind of a show—but with something like an expanded heart and a renewed faith in the theatre. I could hardly fathom why more people weren’t seeing it twice, even with finals approaching. It’s that class of show which begs a second viewing, partly for pondering its mysteries, but mostly for pleasure.

Company is foremost a play about loneliness. It’s about one man wrestling with his own inability—or lack of motivation—to get married. It’s also about solipsism. Much of the time, the vitally-wrought Bobby (Robin Franklin) seems to be the only real person on stage. The other characters—who sometimes hold poses or talk at length as Bobby makes Fleabag-style facial expressions at the audience—are mere personifications of social pressures, or even figments of Bobby’s imagination. Even Bobby himself is a ridiculously vague Everyman-type; we don’t know where he’s from, where he’s going, or what he does for a living. All we know is that he’s somewhat educated and woman-obsessed. His emotions, on the other hand, are deep and definite. Everyone else on stage is there to remind us that Bobby is, at the end of the day, fundamentally alone.

And yet the whole experience of the show was inexplicably joyous. This seeming contradiction is what made it so compelling, and, in a way, impenetrable.

Here’s the basic shape of the thing:

Bobby is turning 35. His friends are all either married or getting in or out of marriage; he is not. His friends bring up that fact a lot. It makes Bobby uncomfortable.

That really is about all there is to it. A surprise party for Bobby marks the beginning of the play, “resets” at the start of act two, and then again, in an altered form, bookends the play. Loosely in the tradition of Seinfeld and Waiting for Godot, Company is one of those shows where nothing happens—twice.

There are several scenes in which Bobby talks with his friends or casual lovers, presenting marriage and continued bachelorhood as opposite but equal disasters. Harry (Liam Flanigan) puts Bobby’s crisis succinctly in the last scene: “You’ve got so many reasons for not being with someone, but Robert, you haven’t got one good reason for being alone.” And if anyone in the play provides a moral, it’s when his friend Peter (Jonathan White) says shortly afterward, “Don’t be afraid that it won’t be perfect, buddy. The only thing to be afraid of really is that it won’t be.” The real boogeyman of the play isn’t Bobby’s annoying friends, after all; it’s his own perfectionism.

The road to optimism about marriage, if it is an optimism, is a rough one. Bobby is witness to all kinds of marital apocalypses. Compulsive overeater Sarah (Maggie Reyes) and alcoholic Harry are unable to restrain each other, except with karate chops and wrestling holds. Jenny (Madeline Barnes) will always be too square for David (Rose Dimitroyannis). Peter may love Susan (Hannah Paul) platonically, but—in one of the most harrowing recent scenes I can remember seeing—his deeper desire for Bobby gets the best of him. And unforgettably, aging femme fatale Joanne (Rebecca Husk) makes the moves on Bobby, despite being married to Larry (Kenjiro Lee).

How can Bobby see marriage as anything but a mistake? One time he asks Harry if he’s ever sorry he got married. Harry wordlessly gestures for Bobby to take a seat and grabs a mic stand, launching into “Sorry-Grateful.” It’s one of the great comic moments of the production. Fred Dan and Eric Karsten’s slow-dance disco lights bring the scene to life, just as their rainbow gel inventions give character to much of the rest of the play.

Bobby’s prospects for marriage are dim, especially if by dim you mean dim-witted: there’s flight attendant June—I mean April!—played by Alisa Boland; a magisterially insufferable New Yorker, Marta (Angela Calabria); and small-town girl Kathy (Ruby Ross), a would-be-perfect match if she weren’t engaged to somebody else. Bobby asks Kathy: “So you wanted to marry me? And I wanted to marry you. Well then, how the hell did we ever end up such good friends?” I laugh and realize, somehow, that this play has broken my heart. Bobby, c’est moi.

New York City is an underlying metaphor throughout. It’s the symbol of perpetual bachelorhood, endless choice. “I think there’s a time to come to New York, and a time to leave,” Kathy says before leaving Bobby. But no matter: She’s only one person in a line of prospects. Marta sings, “Another hundred people just got off of the train,” and she’s right, too. For a noncommittal man like Bobby in a city like New York, choosing is impossible.

All this drama hangs on the sounds of 11 musicians, visible to the audience from behind a black screen, conducted by Gareth Ramsey. It’s one of my favorite Sondheim scores, drawing on ’60s pop and Old Broadway and Maurice Ravel and George Gershwin alike. Rather than falling back lazily on the same chord progressions and melodies, Sondheim has an ingenious and ever-evolving sense of the motif. The title song sounds simultaneously like New York traffic and a dial tone, while the rest of the score swings effortlessly between bustle and longing. “You Could Drive a Person Crazy” echoes the Andrews Sisters, while “Side by Side by Side” channels the Rockettes. Rebecca Husk, with her powerful voice, lives up to her name in “The Ladies Who Lunch,” a cynical drunken twist on traditional pop. The showstopper and finale is delivered by Robin Franklin in “Being Alive,” where Bobby’s surface-level, all-American “everything’s fine” veneer is torn off and the feelings come pouring through, sweat and tears running down his face. It’s a sound and a sight to behold.

The set, props, and costumes (Paris Bezanis, Marly Santora, Lillian Hermes) are simple but persuasive. The late 1960s, early ’70s aesthetic prevails—leather jackets, flannel, bandanas—and the dated references of the script are preserved, even where they go over the heads of a modern audience. (Ann Miller doesn’t get nods anymore, and non–New Yorkers may not get the significance of the Seagram Building or 14th Street.) But Company resembles a good Woody Allen movie in that its wit overrides the datedness and the New York specificity. The couples are color-coordinated, and the set—generally depicting Bobby’s apartment—is littered with cardboard boxes. He still hasn’t unpacked, hasn’t properly moved into his own apartment, nor settled into his own life. “To me a person’s not complete until he’s married,” Jenny says, and whether or not that’s true, this 49-person cast and crew creates a weirdly inspiring vision of the terror of incompleteness.

It’s an inherent and tragic limitation of the theatre review form that by the time you’ve managed to articulately advocate for a show, its run is usually over. Positive reviews seemingly serve no purpose except to inculcate regret. “If you didn’t see this show,” the glowing-review-too-late seems to say, “well, you should have.” But I’m left with no choice but to stand by that view: You should have seen Company. The next time you get the chance to see a Klum/Lynch production, don’t miss it.