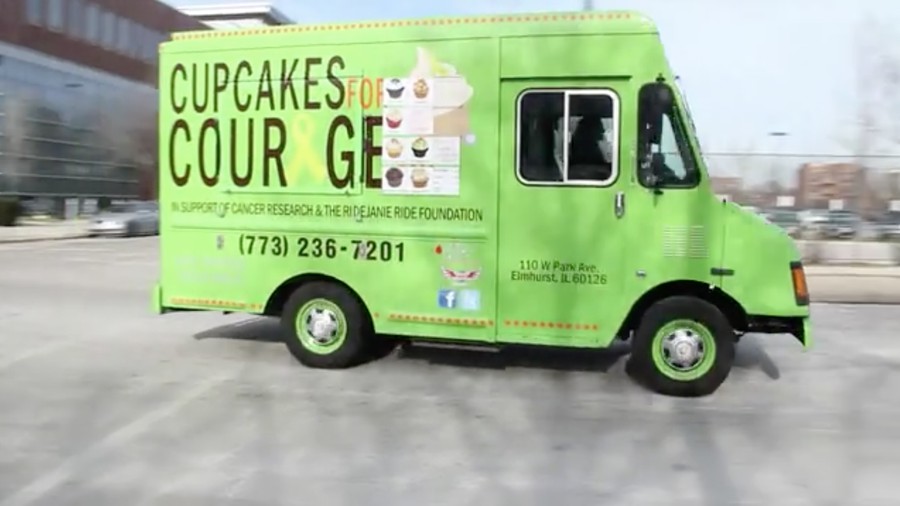 Courtesy of Cupcakes for Courage

In 2012, the City of Chicago passed an ordinance that prevented food trucks from operating within 200 feet of any brick-and-mortar establishment that serves food and drinks. The ordinance also stipulated that food trucks can’t operate for more than two hours at a time and must have GPS devices so the city can record their whereabouts.

Laura Pekarik, who used to operate Cupcakes for Courage, argues that she has been driven out of business by the regulations and brought the lawsuit to the State’s highest court on Wednesday after losing twice in the lower courts. Robert Frommer, an attorney at the Institute for Justice, has argued that the City’s restrictions on food trucks suppress fair competition and has no understandable reason besides protecting restaurant owners.

At a panel discussing the legal implications of the lawsuit at the University of Chicago Law School, Frommer spoke to a crowd of students and said that the true meaning of the ordinance is that “the government can pick winners and losers when one group is more important than the other,” and continues, “since restaurants pay more in taxes than food trucks, [the city decided,] ‘We’re gonna pick them.’”

“The Illinois Supreme Court, for over 130 years, have said that governments can’t legislate protection for existing businesses against competitor forces,” Frommer told The Maroon. “If Illinois says it’s okay for local governments to squash the little guy because they think the other person is more important, that’s unprecedented not just in Illinois history but in American jurisprudence.”

He also noted that other states, such as New York, New Jersey, and Missouri, have rejected regulations that “suppress vendors in order to protect restaurants.”

The City argued that the ordinance “balanced” the interests of food truck owners with restaurant owners, who contribute significantly to the welfare of the city by paying real estate taxes, creating jobs, and attracting tourism. An Illinois circuit court and the Illinois Appellate Court both agreed that the ordinance served other legitimate public ends such as reducing traffic congestion and diverting more retail food options to the underserved parts of the city.

Glenn Keefer, who owned Keefer’s steakhouse in 2012, had played a critical role in influencing the City’s decision to issue the ordinance. In 2012, Keefer wrote an opinion piece for Crain’s Chicago Business, emphasizing the need to “prevent unscrupulous truck operators from parking in front of the highest-priced real estate in the city to siphon off customers headed to businesses paying property taxes, rent and fees for signs, loading zones, building permits.” Keefer asserts that “unfair competition could lead to empty storefronts, lost jobs and fewer tax dollars.”

Elizabeth Kregor, director of the Institute for Justice (IJ) Clinic on Entrepreneurship at the Law School, said at a panel on the ordinance that lawmakers might be tempted to care more about the interests of restaurant owners because they’ve built much closer relationships with them over the years.

“I think that’s one of the reasons it’s really hard to convince lawmakers to open the doors to competitors and to new ideas and innovation when the people that they’ve known for a long time are saying ‘shut those doors,’” she said.

When the lawsuit was reviewed by the Illinois Appellate Court, the plaintiff’s claim that the GPS requirement was a breach of privacy rights was rejected by the Court on the grounds that the GPS information had never been requested to constitute an actual search. The Court agreed with the initial argument that GPS tracking was necessary for potential health inspections. However, no such inspection has ever taken place.

One week before the oral argument at the Illinois Supreme Court, Frommer spoke at a Law School panel on the food trucks case, where he said, “The privacy implications of the Appellate Court’s decision were stunning.” He added that “it was something that cost trucks hundreds of dollars a year.”

Working with the IJ Clinic, Frommer spearheaded the National Street Vending initiative in 2010, which has launched successful lawsuits against laws which they claimed stifled competition in favor of restaurants across the U.S. Chicago has been their toughest challenge yet.

“The City of Chicago does not back down,” said Frommer. “People like Alderman Tunney, who is the former head of the Illinois Restaurant Association and owner of multiple Ann Sather restaurants, pushed through an ordinance that hobbled the industry incredibly. The fines were quadrupled.” Alderman Tunney, who represents the 44th Ward, could not be reached for comment.

Kregor added, “The City called the food trucks in for a meeting to discuss the ordinance and it ended up just being a presentation of the ordinance they were going to introduce the very next day. There was no really open conversation or solicitation of the inside experience of the actual food truck owners who were regulated.”

Kregor said that the order and timing of the trial worked against the food trucks.

“I guess it’s tradition that people who come to testify in support, testify first. We sat there as person after person testified on behalf of the Illinois Restaurant Association,” she said. “As time went on, City Council members of this committee started getting up and leaving—I guess, they had other things to do—so, by the time the truck owners testified, there were only a couple left from the committee.”

Food truck operators testified about their investments in their trucks and feared that they wouldn’t be able to earn a living under the new ordinance.

One food truck operator who attended the public hearing, Nida Rodriguez, has been in business since 2012 and has had to adapt her business to the new regulations. Instead of interacting with customers on the street, she now uses her truck for catering. She was invited to speak at the Law School’s panel and said the experience of not being heard out by the City Council was “surreal.”

“I just couldn’t believe that it was so dismissive. We put our lives into this, and to not even be heard was very disheartening,” Rodriguez said.