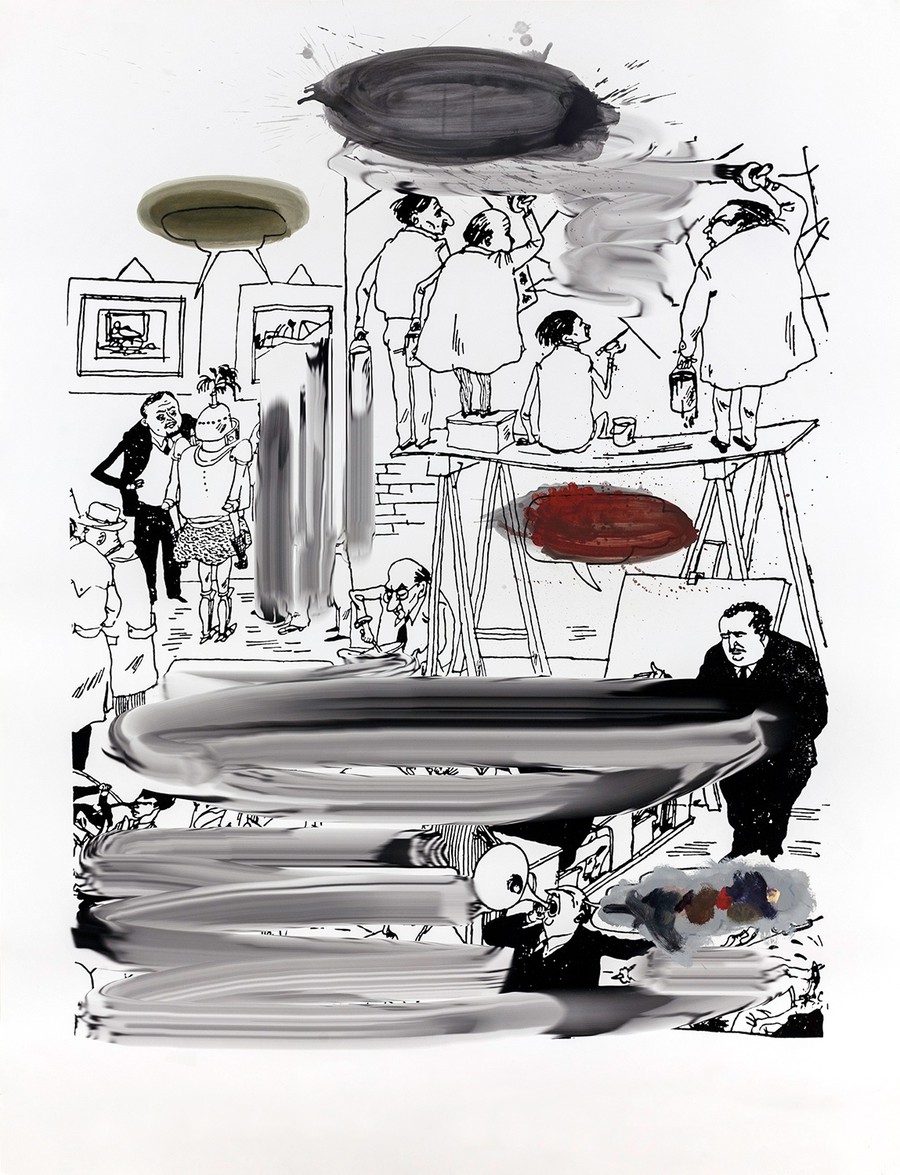 Courtesy of The Artist and Metro Pictures, New York

“The topic of the exhibition is the exhibition itself,” David Maljković said in an artist talk delivered during the opening of his latest collection at the Renaissance Society.

The Croatian artist’s Also on View, curated by Karsten Lund, brings together an interconnected and referential body of works ranging from video to sculpture. A droning frequency bulges and recedes in pitch, temporarily filling the plastered white room of the Renaissance Society; selectively pixelated photographs hover briefly on a wall, constantly being replaced one after the other with each click of the projector; long-limbed figures dance and writhe within silent animations or are laser-etched onto canvas and inkjet prints.

Five sculptures occupy much of the exhibit, all presented on the floor, inviting the viewer to examine the delicate etchings or physical textures in careful detail. A wall divides the rest of the exhibit—on its left, fabric prints draped across each other rest above a black hole in the wall where a microphone has been placed; it hums into a small Roland Cube amplifier beneath it. A large inkjet print distorted by oil paint takes up much of the right side of the wall, where cartoon figures are blurred by long, smooth brushstrokes of gray, their empty speech bubbles smeared with color.

But the viewer’s eye is most drawn to “Frustrated Painter or Something About Painting,” a large multimedia recreation of one of the artist’s earlier photographic works. Completed on site, “Frustrated Painter” depicts a hanging leather jacket with one arm extending into a white cone ending with colored quadrangles. In keeping with Maljković’s reexamination of the past, the photograph has been transformed into a large, clinging wallpaper topped with swirls of pigment. A dark, messy smear draws the viewer’s gaze to the top of the work, perhaps suggesting the viewer to imagine a figure sporting the leather jacket. Behind the wall, animations and etchings on oil-painted canvas or prints are open to an intimate viewing. Here is the greatest congregation of Maljković’s Alterity Line works, indebted to the artist’s earlier photographs. Vectorized and etched by laser cutter, simplified figures stand upon oil paint backgrounds or, elsewhere in the exhibit, are projected as animations.

In his presentation, Maljković displayed many of the works reinterpreted in Also on View from his time at the Academy of Fine Arts in Zagreb and the Rijksakademie in Amsterdam.A significant portion of the artist’s discussion was dedicated to his fascination with futuristic concept cars and the role they have played in his sculpture work—one of these, a fiberglass mold of a Peugeot car, is on display. He talked about making use of the Renaissance Society’s small space. “For the first time, I put the biggest number of sculptures together…that had never come together in this amount,” hesaid.

Also on Viewis on exhibition at the Renaissance Society until April 7.