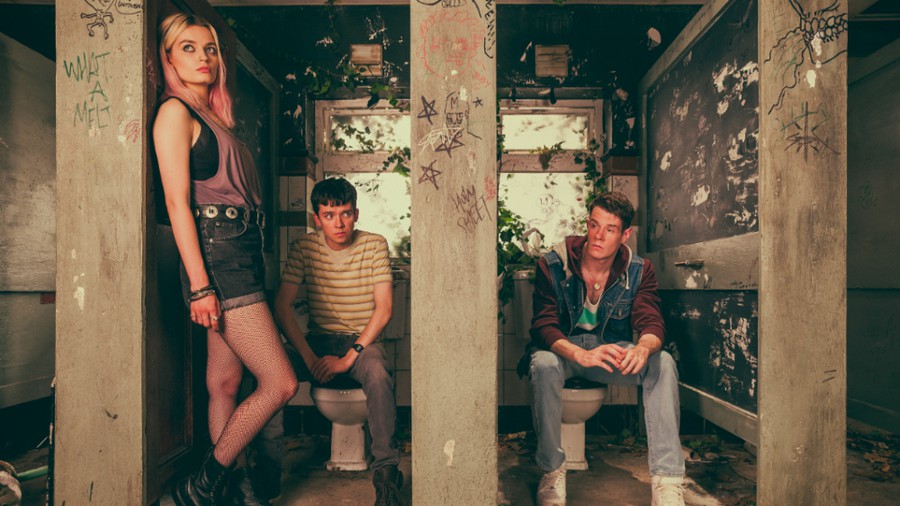 Coming-of-age television shows set amid high school drama and angst are a dime a dozen. From Freaks and Geeks at the turn of the millennium—a show ahead of its time in its honest and insightful conception of young adulthood—to last year’s The End of the Fing World, which unfolds like a surreal nightmare over the course of its eight episodes, the genre can feel exhausted. But Netflix’s Sex Education—which bills itself as a twist on the raunchy teen comedies of yore—manages to find its own niche by thoughtfully teasing apart the thing on every high schooler’s mind: sex.

The show features a motley cast, each with their own set of struggles, anxieties, and sense of place in the world. Otis (Asa Butterfield), the central character, is a socially awkward, insecure 16-year-old content with getting through life unnoticed. Jean (Gillian Anderson), his mother, is a divorced sex therapist with quite the progressive sense of parental boundaries. And Eric (Ncuti Gatwa), Otis’s best friend and the gay son of very religious African parents, is out, proud, and flamboyant. Through a convoluted series of events, Otis is roped into starting a sex clinic at his high school by Maeve (Emma Mackey), a smart but unpopular girl from a broken home. From this unlikely and slightly fanciful beginning, we are introduced to a whole host of other fleshed-out characters, warts and all.

At first, Sex Education feels as if every worn-out trope of ’80s American high school films has somehow been transplanted across the pond to a preppy English secondary school. Amid gorgeous shots of the school grounds and the surrounding countryside, we are introduced to a seemingly simplistic world of varsity jacket–wearing jocks and socially inept band geeks. Maeve initially appears to be the high school burnout incarnate, complete with bubblegum-pink hair, leather jacket, and permanent scowl. The school bully, Adam (Connor Swindells), physically intimidates Eric into giving up his lunch. Students with piercings and baggy pants constantly skate through the hallways. There is even a musical number later in the show.

Most importantly, the show takes these stereotypical characters further, perhaps, than they have ever been. Classic American high school films like The Breakfast Club have similarly reflected on the performative superficiality of adolescent stereotypes, but Sex Education dives even deeper, tackling the issues of modern teenage sexuality with incredible tact and honesty. Sex Education, like few other shows in recent memory, makes a point to show all these moments in vivid and uncomfortable clarity.

Beyond the superficial stereotypes and somewhat fantastical aesthetic, the show is chock-full of fulfilling storylines and artfully developed characters, brought to life by some excellent performances from the cast. Eric’s character arc is particularly meaningful, charting his struggle to accept and love himself in a world that is so often homophobic. And Maeve’s friend Aimee (Aimee Lou Wood) is wide-eyed and endearing, which makes her one of the most charismatic characters in the show.

Full of heart and unexpected bits of wisdom,Sex Education is a touching and humorous addition to the coming-of-age high school genre that forays into unprecedented territory. It’s refreshing to see sex scenes that don’t seem polished and air-brushed to the point of plasticity. It’s comforting and empowering to see the most intimate insecurities of the show’s characters revealed with such humor and warmth. Perhaps most importantly, Sex Education seems to tell us it’s all going to be OK.