The Maroon sat down with developer Leon Walker to hear his thoughts on investing in South Side neighborhoods and discuss his time at UChicago. 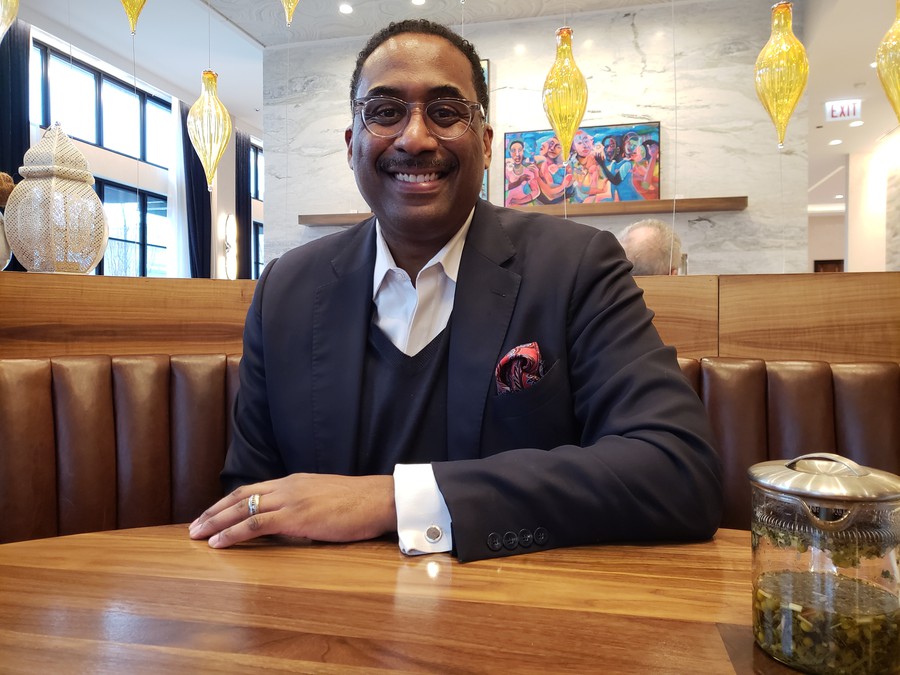 Leon I. Walker (J.D. ’94, M.B.A. ’94) grew up on the South Side of Chicago and hopes to play a key role in its development. As a managing partner at DL3 Realty, he has developed a range of projects that intend to reinvigorate disinvested neighborhoods, including the major Englewood Square development centered on a Whole Foods that opened in 2016.

One of his more recent projects, developing Woodlawn’s new Jewel-Osco, has brought him back to the neighborhoods he grew up in. The Jewel will open on March 7 after almost three years of development.

The Maroon sat down with Walker to discuss his background, his time at the University, the new Jewel-Osco and its implications for Woodlawn, and his approach to community development and revitalization.

CM: Can you talk about your background and your history in real estate?

Walker: I grew up on the South Side of the city. I was the son of an educator, an entrepreneur, and an investor, who really got into the real estate business by building out spaces and converting buildings to childcare centers. And we actually built one on the corner of 71st and Stony Island, in the South Shore neighborhood, right across from [where] the Starbucks is there now…. I got my first hard hat on that job. And I knew that I wanted to be in an industry that was part of changing communities and improving the lives of people. That was really when the bug bit me for real estate, on that project.

I came in [back to the South Side in 2000, after some years in corporate work in Los Angeles], and took over our education business and our real estate business. At the time we had about 150 staff persons, a thousand kids in our programs across the South Side. We had a small portfolio of buildings, in different neighborhoods ranging from Morgan Park to Roseland to South Shore…. At the time [around 2005], there was a lot going on in education; I was on the mayor’s advisory committee, the CPS for early childhood, and I was doing some things at the state level as well, and making sure that we invested in early education. We all know it now: A dollar invested today saves seven dollars later; back then, it was still kind of new information, in the early 2000s.

There were a lot of different models and we were active in those conversations, trying to figure out how to best serve communities. And this has all been a part of how I actually came up with the way that we [at DL3] invest in urban markets. We had a really different approach to investing in urban markets that has evolved over time…. How do you bring private equity into the key transactions that make a difference in our community?

Chicago Maroon: What sort of impact do you think the Jewel-Osco will have on Woodlawn and the surrounding area, both in the short term and the long term?

Leon Walker:It’s been over 40 years since Woodlawn had a full-service grocery store like a Jewel-Osco, and that was Hillman’s. So this is a community that’s been existing without that critical sort of neighborhood infrastructure and asset.

So, it does three important things. One, of course, it provides local jobs in a good company that really treats its employees well. Jewel is a union grocer, so they pay union wages there and have benefits and things. So people can build a career in the business in one of these locations.

It creates the opportunity to build the neighborhood, to grow, to rebound. Woodlawn was once a community of 80,000 people. It’s hard to get there again, where we have not only a vibrant neighborhood, [but] one that actually has a compatible but different character than Hyde Park. This will encourage additional investment in the area, and the key is, we’re now very engaged in making sure that we become more of a market player in the neighborhood.

The Obama Foundation is a tremendous asset to Woodlawn, but in terms of building a community, you need the top three things people ask for: Where am I going to shop and eat; where are my kids going to go to school; and how safe are my streets. As we get about answering those questions…we’re moving in the right direction, to create a sustainable community, where you don’t really need as much government intervention and charity support.

We have five factors that you need for private equity investment to really come in and have a good return both financially and socially, and that is: one, getting vacant or available land, or underutilized structures. You need anchor institutions…or [an anchor] institution, that is committed to the long term for the community. You need a historically successful location where there’s infrastructure for traffic and the movement of people to and from the site…. It’s the next two that are really also critical in selecting a community at the right time on this lifecycle to make an investment.... You have to be present, in the community, having those conversations, and really trying to learn from each other, so that we deliver a better project. And we did that.

The fifth factor is that you need activity changing the brand of the neighborhood. Every neighborhood has a reputation, or a brand…and so a lot of the time, the news cycle drives a very negative brand of many of our communities on the South Side. Some of it is overrepresented! In other words, it’s not as bad as it’s reported…. You see an investment by a major retailer like Jewel in a neighborhood like Woodlawn, it gives residents hope and it gives investors confidence to continue making investments.

LW: For me, being an investor on the South Side of the city in disinvested neighborhoods…requires being bilingual, sometimes; bicultural, sometimes; but [it also requires] good training and teaching, which I got at the University of Chicago...corporate experience, as well as my background [of] coming up in an entrepreneurial family, working there. You put all that together, and you’re able to come up with a creative approach to invest in and bring in capital to this community.

...I call that approach “venture development.” This [is the] point in the neighborhood’s cycle [where] you bring in private equity capital to help sustain that neighborhood and to also invest in an ethical and responsible way, such that you can have revitalization happen without gentrifying negatively. The difference between revitalization and gentrification is one word: intentionality. You have to be intentional about making sure that you’re engaging the historic populations, the legacy businesses, just the existing residents [and] having them included in your revitalization strategy.

CM:When it came specifically to the [Woodlawn] Jewel-Osco project, how did that come together? I know UChicago and POAH [nonprofit developer Preservation of Affordable Housing, which helped bring the Jewel to Woodlawn] were involved, but how’d it come to DL3? How did you get involved?

LW: POAH had been trying, for several years, to land a deal with another large grocer.... I went to POAH [Chicago-area Vice President] Bill Eager, and I went to [Vice President for Civic Engagement] Derek Douglas at the University, and I said, I can actually help your effort; I have the history and the background to communicate why this is a successful site…. Remember, every retail [site] has to be seen as a successful opportunity. They’re not doing this for charity. So you have to be able to communicate how this site is going to work.

We started this over three years ago, [when] there wasn’t the excitement, there wasn’t [the Sophy Hotel]…. The Obama Presidential Center was still in discussions about two different locations on the South Side. There wasn’t as much enthusiasm for the investments in the community as there is today. I mean, there were still issues of crime in Woodlawn at the time, there were still headline[-generating] activities at the time that were negative, images of the community; so we were coming in, talking to retailers, like Jewel, and convincing them that there’s a story here.

CM:So once you took on the project, how did that process work? Were there any unexpected challenges or concerns that came up during the development that you had to address?

LW: At this time, people were much more enthusiastic about some of the other, newer entrants in the grocery space. I mean Jewel, you’ve got to understand, has been around for over a hundred years [since 1899]. So their newer stores are beautiful, but some of their older stores, which people were familiar with in this part of the city; they were like, “we want something more.” I said, Jewel is going to deliver a store that’s going to be gorgeous, meeting all the needs of the community, the shopping needs, and is going to be a bright spot for future development in and around the area. But I had to get people to buy into that vision.

The article has been updated to correct a transcription error in the phrase: "in different neighborhoods ranging from Morgan Park to Roseland to South Shore." The word "Roseland" was previously written as "Roslyn."