The University informed departments last fall via memo that changes to the Chicago minimum wage and a reduction in work-study allocations could cause the University’s funding pool to expire in spring quarter.

The University would be responsible for independently funding work study positions if the funds run dry.

Each year, the Department of Education allocates work-study funds to colleges. This money is used to pay 75 percent of the wages for certain student jobs, and the employers pay the other 25 percent of students' paychecks. Universities are responsible for managing work-study funds over the course of the year.

According to a Department of Education spokesperson, work-study employers have the option of funding fewer students or cutting back on student workers’ hours to account for a higher minimum wage. The memo obtained by The Maroon, dated September 6, 2018, reads, “It is necessary for the University to maintain federal compliance and, in turn, continued funding.”

News office spokesperson Marielle Sainvilus reiterated this point in an e-mailed statement on Tuesday: “We do not anticipate any work changes to the FWS program for the rest of the school year.”

Sainvilus wrote that the memo was sent to “proactively notify FWS employers of the stresses on funding this year,” allowing them to plan their budget accordingly. “Because the funding varies from year to year, the University community works together to accommodate the many changes in the program.” 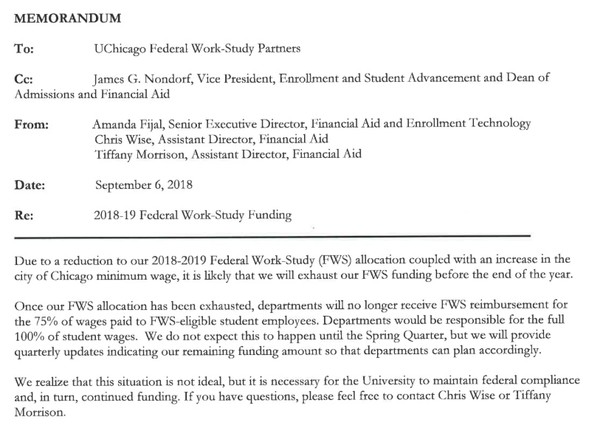