The discussion revolved around some of Pritzker's biggest obstacles: the $3.2 billion budget deficit and te $133.5 billion unfunded pension liability. 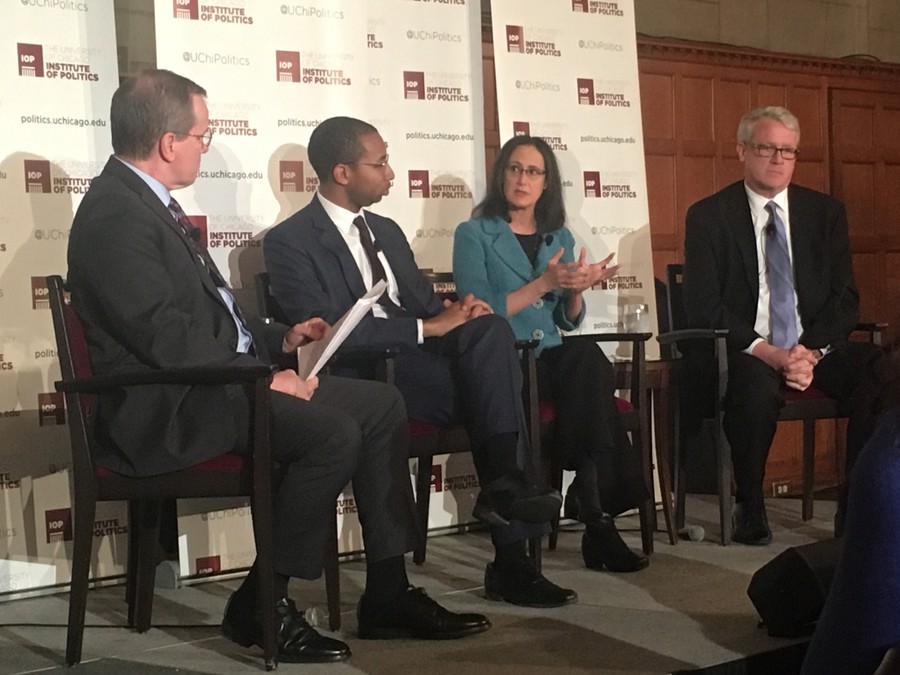 “Pritzker is in his honeymoon period, but he has big challenges ahead,” said Dave McKinney, state politics reporter for WBEZ.

McKinney opened the conversation by summarizing some of the major obstacles Pritzker will face as he begins his term, which started last month: the $3.2 billion persistent budget deficit, the $133.5 billion unfunded pension liability, and bipartisanship.

Last week, the Pritzker administration released a report showing that Illinois’s persistent budget deficit is higher than previously thought, which means that the state’s debt could be worse than projected. When asked about how Pritzker plans to solve the deficit, Deputy Governor Mitchell answered that Pritzker plans to work towards a balanced budget.

“Let’s introduce debate, pass a balanced budget on time,” Mitchell said. “It’s going to be the first installment in what’s going to be a multi-year plan because the budget deficit is higher than we were led to believe.”

To balance the budget, Mitchell said that Pritzker plans on altering Illinois’ flat income tax to a progressive tax in order to raise revenue. “With so much wealth concentrated in the hands of the wealthy in the past few decades, we’re going to ask those folks who have done well to pay a little more,” Mitchell said.

Durkin, on the other hand, said that Illinois should not ask taxpayers to pay more to reduce the deficit.

“I think it’s very ambitious but unrealistic also,” he said. “Until we ask the residents of Illinois for more tax dollars, we have to do a better job of showing them we can actually control our money, handle our deficits, without asking for more money. We can’t go back to the taxpayers unless we can prove that we’re going to be efficient.”

Durkin also said that a progressive tax would harm the middle class, arguing that “middle-income families will be ones responsible for paying more.” He called on Pritzker to disclose the proposed tax rates.

In regard to the pension liability, Mitchell said that the administration plans on figuring out ways to make pensions more affordable. “To fund pensions, we need to make an honest accounting of where the deficit is,” he said. “We need to legalize marijuana and tax revenue. Sports betting is another place of revenue as well as a tax on e-cigarettes and vaping.”

Madigan attributed the deficit and pension issues to the reluctance of elected officials to cut back on spending.

“We’re in a hole for a variety of reasons: too generous pensions,” Madigan said. “We have over 600 pensions systems in the state of Illinois. There are a lot of problems in the pension system. It’s a problem of elected officials wanting to say yes and not looking down the road as to what the implications are going to be.”

“You want to create jobs, you want to create opportunity, it costs money,” Madigan said. “If you are not increasing the money that’s coming in because people are also leaving the state, you have a real problem.”

When asked how Illinois’s relationship with the Donald Trump administration will change under the Pritzker administration, Mitchell replied that he feels Pritzker will work with Trump when possible but stick to Illinois’s values of diversity and equality.

“In places where President Trump is insulting to our values, I think you’re going to see strong opposition,” he added.

Throughout the discussion, Durkin stressed the importance of bipartisanship when resolving controversial issues in the upcoming months and years. “I have an agreement with J.B. Pritzker to not pass things without letting us know. The state is not going to move forward with bitter partisanship,” he said.

Mitchell echoed the sentiment, saying, “Where we can work together, on the budget, on infrastructure, we’re going to want Republican ideas. We believe they can help move the state forward.”