The discussion ranged from the concept of an immaterial soul to the possibility of "backing up" memories, like computer data. 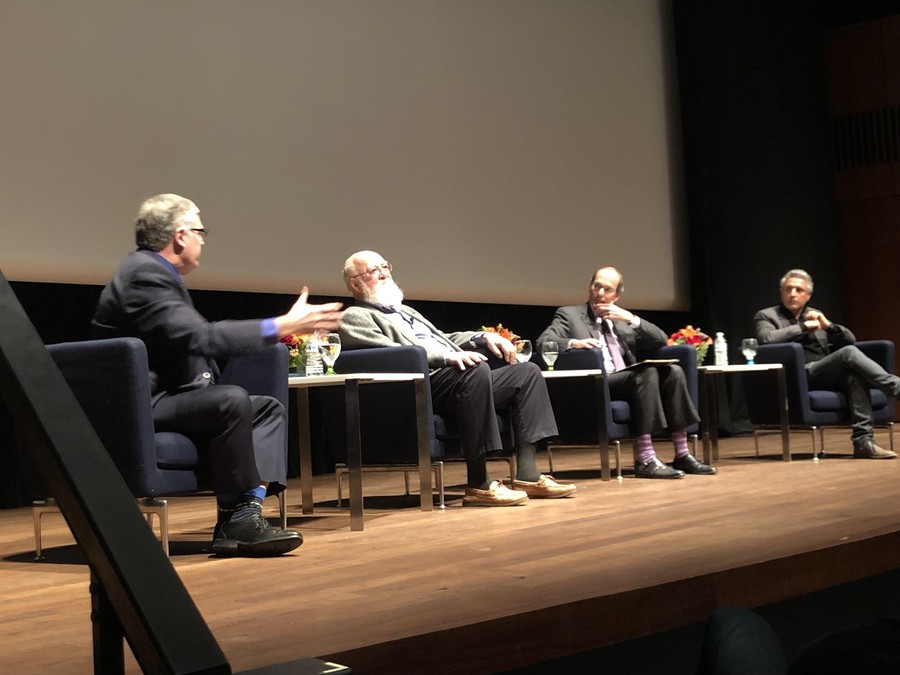 The Stevanovich Institute on the Formation of Knowledge (SIFK) hosted a panel discussion entitled “Religion, Identity, and the Construction of Faith” on February 5.

The SIFK was founded in 2016 “with the mission of investigating how knowledge has been shaped and informed by history and culture, including those forces present in our current world.”

The panel featured Reza Aslan, a religious scholar, commentator, and professor at the University of California, Riverside. He is the author of four books, including Zealot: The Life and Times of Jesus of Nazareth, and No god but God: The Origins, Evolution, and Future of Islam.

Aslan was joined by William Schweiker, a religious ethicist, ordained minister in the United Methodist Church, and UChicago professor, as well as by Daniel Dennett, a cognitive scientist and professor of philosophy at Tufts University. The panel was moderated by Daniel Nirenberg, interim dean of the Divinity School.

The panel began with a discussion about the concept of “an immaterial soul,” which Aslan called “the most universal belief.” Citing Aristotle’s definition of the soul as the informational organization of consciousness, Dennett said that “[the soul is] software that runs on your brain. Well, software is immortal, or can be.” According to Dennett, the technological possibility of replicating the organization of the brain on a massive computer, or even another brain would mean that “the soul…will be portable in the same way that Microsoft Word is portable.”

Dennett described a thought experiment in which humans could be “backed up” every Friday, in the same way that computer data is backed up. If you “plunged to your death in the San Francisco Bay” while “jumping off the golden gate bridge without a bungee cord on Saturday” and were reembodied on Monday, “you wouldn't remember the jump because the jump happened after the last backup.”

Nirenberg categorically rejected Friday as “back up day” saying “Friday’s out of the question, it’s Shabbat.”

The panelists also compared their perspectives on the evolution of religion. Turning to his training as a naturalist, Dennett described religion as a “cultural virus” that “occupied, inhabited, and infected the minds of people” like “a common cold” that “spreads because it can…and has found hosts that cannot prevent it from living there.”

Aslan presented an entirely different view of religion. Rather than “beliefs and practices or doctrine and ideology,” he concluded that “religion is more than anything else … about identity. When someone says I'm a Muslim or Jew or a Christian, they are not making a faith statement, they are making an identity statement.”

For Aslan, the logical conclusion of faith as an identity marker is that “meaning comes from the person who encounters this group,” and it is in this way that religion “can lead to the civil rights movement in the United States and…to genocide in Myanmar…because it is reliant on the individual for it to have any real meaning.”

The evening wrapped up with a discussion of the future of organized religion. Citing the Pew Forum on Religion and Public Life, Aslan reported that religiously unaffiliated people—those who are “spiritual but not religious”—are the fastest-growing American religious population.

For Aslan, the trend of people “rejecting the religious labels that had been offered to them” underscores that “religion is moving. It's not going away.”

Referencing the spread of global Christianity and global Islam, Aslan envisioned a future in which religion supersedes identity markers like nationality, and concluded that “all you have to do is look around the world to know that God is still very much alive, for better or worse.”