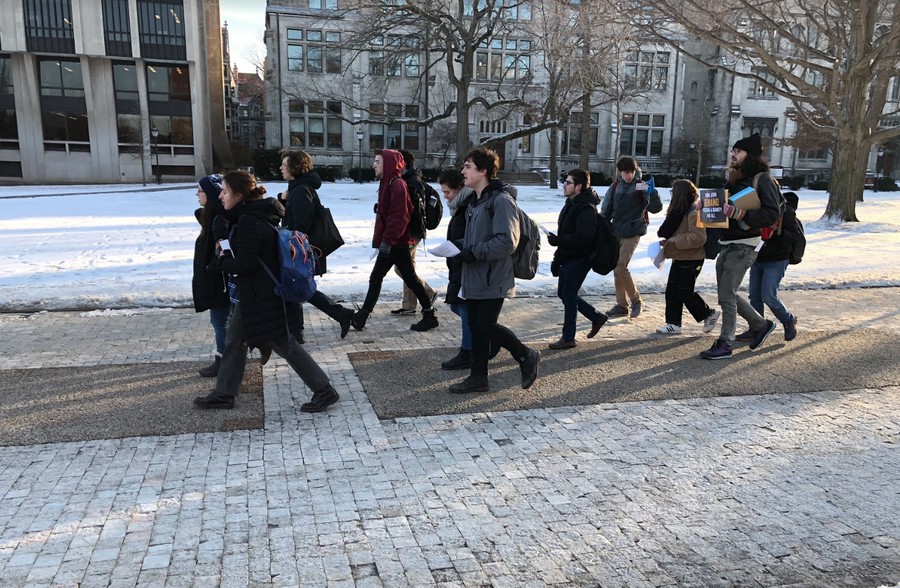 Organizers from If Not Now, a progressive Jewish organization, marched from the Quad to UChicago Hillel to demand changes to Hillel's Birthright trip.

On Wednesday, the University of Chicago branch of If Not Now, a progressive Jewish organization that advocates for Palestinian rights, held a protest outside UChicago Hillel, after they issued a set of demands regarding its upcoming Birthright trip earlier this week.

If Not Now is a national group of American Jewish progressive activists established to oppose Israeli occupation of Gaza and the West Bank. The University of Chicago branch of If Not Now was founded last year. Wednesday’s action was If Not Now’s largest demonstration to date, according to second-year organizer Dikla Taylor.

The demonstration was part of If Not Now’s #NotJustAFreeTrip campaign, which argues that Birthright—a non-profit organization that offers free trips to Israel for Jewish youths—unfairly presents a picture of Israel that excludes the Palestinian point of view. Birthright “curates an experience that deliberately obscures the Occupation and the truth about Israel from view,” the campaign website reads. It further points out that “participants often drive through the West Bank while skipping over the brutality of checkpoints and the Palestinians who live there.”

In Wednesday’s action, If Not Now members began at the main quadrangles, making speeches that recounted their personal experiences as American Jews and described their thoughts on the Israeli-Palestine politics. The group then walked to Hillel to deliver a box of letters urging the organization to change their Birthright trip policies, singing songs that urged for justice in the Middle East along the way. Students inside Hillel, after a brief pause, opened their doors and accepted If Not Now’s box of messages.

The University of Chicago’s Hillel Center organizes Birthright trips for Jewish students at the University. Hillel did not respond to The Maroon’s request for comment on the demonstration and demands.

“It’s become hard to deny that Birthright has a political agenda. Birthright’s biggest donor, Sheldon Adelson, is also Trump’s biggest donor, and he has an explicitly right-wing, pro-occupation agenda. It’s not surprising that Adelson’s agenda produces a distorted, one-sided experience of Israel,” third-year Taylor Fox, If Not Now communications coordinator, wrote in a press release about Wednesday’s action.

If Not Now organizers were also prompted to action by what they describe as censorship of anti-occupation voices by Birthright organizers. The organization’s press release cited an incident where Birthright “changed its code of conduct to prevent anti-occupation Jews from speaking about their views on Birthright, and has kicked off three Birthright participants for asking questions about the occupation.”

To address their grievances, If Not Now organizers made four demands of UChicago Hillel’s Birthright program: “Mark the West Bank on every map. Acknowledge the Occupation is a human rights crisis. Show a checkpoint from a Palestinian perspective. Take the trip to Hebron.”

The West Bank is a territory to the east of Israel’s territorial borders that has been under Israeli military control since the Six-Day War; it is home to between 1.5 and 3 million Palestinians, many of whom are citizens of the Palestinian National Authority, a political entity created following the 1993 Oslo Accords to govern the West Bank.

Hebron is a city in the south of the West Bank where an Israeli community settled in 1968.  Following the Hebron Protocol of 1997, Hebron has been split into two administrative regions: sector H1, under Palestinian Authority rule; and sector H2, controlled by Israel.

If Not Now urged Hillel to sign a pledge publicly committing itself to these demands by April 1.